Sockeye salmon, otherwise known as "red salmon" or more commonly, "reds" are, by far, Alaska's most popular salmon for freshwater anglers. Found in abundance from Southeast Alaska to Bristol Bay, reds are hard-fighting and they make wonderful table fare. 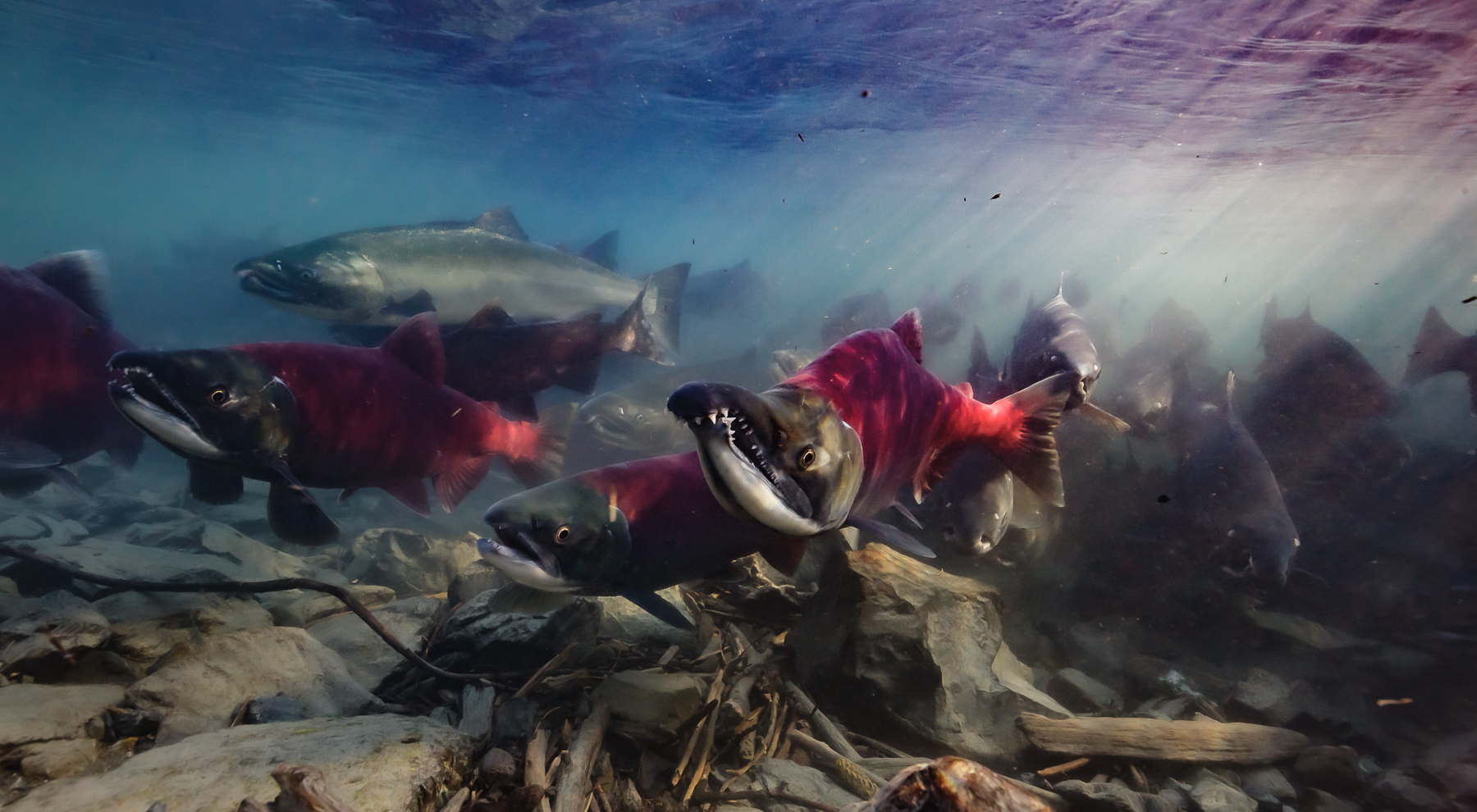 The equipment you use for red fishing depends on where you are and, of course, your personal preference. In remote areas where you have time to finesse the fish ashore, lighter rods with eight to twelve-pound line is fine. But in the combat fishing zones of Southcentral, heavier gear is in order. When you're standing shoulder-to-shoulder with other anglers on the Kenai or the Russian River, you don't have the luxury of playing with your food. Hook the fish solidly and get it to shore as soon as possible, or you risk tangling with other fishermen. In these situations, a medium-heavy action spinning rod around 7 1/2' to 8 1/2' in length, with plenty of backbone is a good choice, with a medium-sized spinning reel outfitted with new 20-lb. monofilament.

Some experienced sockeye anglers prefer a level-wind bait caster rig; the line runs straight off the spool, which allows powerful fish to run more easily without creating friction at the reel, which can result in a broken line. Choose a medium-heavy action for your rod.

There are several ways to rig for reds. The simplest is to crimp a couple of split shots on your line, about 24" above your hook. Tie a #2 coho fly at the terminal end, using a perfection loop; this knot gives you two passes of line through the hook eye, which gives you an advantage by reducing line wear as your offering bounces along the bottom. Adjust the quantity of split shot and the distance from the fly, so you can feel the sinkers just tapping the bottom now and then. This puts your fly in the strike zone for the majority of reds, which migrate upstream, just off the bottom.

Neophyte sockeye anglers love to talk about which color of coho fly is best for what conditions, but experienced fishermen know that most of the time it makes little difference. In most situations, a sparsely-tied fly is best, as is a fly tied on a ring-eyed shank (as opposed to a turned-up or turned-down eye). This is because the ring eye, with its straight pull, gives you a much better chance of a solid hook-set than the turned-down eye, which pulls the front of the fly down, and the turned-up eye, which pulls the front of the fly up when the hook is set.

A technique has recently come into vogue for catching sockeye, which seems to reduce mortality, hooks in eyes, and other damage to fish you intend to release. It involves a circle hook and yarn. You can read about it in our forums AT THIS LINK. The setup involves a straight-eye Gamakatsu Nautilus circle hook in 1/0 size, topped with a bit of yarn. The 1/0 hook meets the 3/8 hook gap restrictions on the Russian River and in the fly-fishing only section on the upper Kenai River. If you plan on fishing in these areas, DO NOT go with larger hooks, or you will be illegal. Elsewhere on the Kenai, you could go with a 2/0, but if you plan to fish the entire system, stick with 1/0 hooks to avoid confusion. The tools needed for this method are included in the tackle list below.

The following video clearly explains the strategy behind the Moffitt Angling method of hooking reds using circle hooks. Note that a straight-eye circle hook must be used for this method to work. Also note that some areas prohibit this method, as it involves the hook point penetrating the fish in the maxillary plate from outside the mouth. In those areas, such a hookup would meet the definition of "snagging". Check the regulations carefully before employing this method.

The tackle needs for red fishing are quite simple. Here's a list: 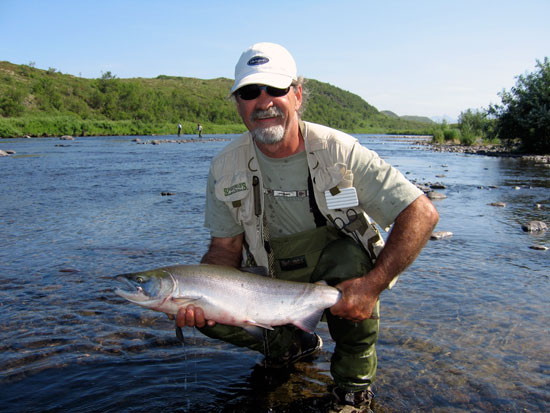 If possible, avoid cotton clothing. Sweatshirts, tee shirts, jeans, and the like retain water when wet, and even in the summertime in Alaska, you can get soaked. You're much better off with synthetics in every layer from the skin out. Wear an insulating layer of light-weight thermal underwear, topped with synthetic pants and a synthetic shirt of some kind. Under-armor is a good brand for thermals, and The North Face makes some great outerwear.

Rain gear is essential. On road-based trips, you can get by with cheaper raingear, but be aware that it may not last long. Serious anglers are better off with Helly Hansen Impertech, or any of several breathable brands that wick away perspiration.

A baseball cap is an excellent choice for shading your eyes so you can see fish holding in shallow areas.

Polarized sunglasses are essential as they not only allow you to see beneath the surface and spot fish easier, but they also protect your eyes from errant hooks and sinkers. NEVER go salmon fishing without protective eyewear!

Waders are another essential piece of gear for red fishing. In popular fisheries such as the Kenai Peninsula's Russian River and the Kenai River itself, if you can't get in the water, other fishermen will end up standing in front of you while you're trying to fish. Hip boots are fine, but you should consider wearing ice cleats with them or choose waders with a sole designed to grip mossy rocks. Regular rubber-bottomed hip boots are prone to slipping on mossy rocks, and you could end up taking a swim! Most anglers prefer breathable chest waders, which allow you to sit down without getting your rear wet on rainy days.

Finally, a pair of fisherman's gloves, with the fingertips cut off so you can tie knots and such, are a great thing to have along on cold, windy days.

TIP ON POLARIZED SUNGLASSES: To determine if a pair of glasses are polarized, put two pairs together, facing each other. Turn one pair 90 degrees to the other, lining up one lens of each pair against the other. If the two lenses become darker, the glasses are polarized. If they don't, they aren't.

Keeping some general principles in mind when you're fishing for reds will go a long way to increasing your safety and enjoyment of the experience. Here are some ideas:

In almost all cases, bears and salmon go together. Some river systems host brown bears exclusively, while others see both black bears and brown bears. Either way, anglers must remain vigilant at all times, and take standard precautions to avoid a negative bear experience. In most cases, bears will avoid anglers and anglers will avoid bears. Where the trouble starts is when either the bear or the angler was not aware of the other's presence and they come upon each other unexpectedly. You can help prevent that by making plenty of noise when walking through the brush along rivers or trails. A second contributing factor to bear trouble is when anglers attract bears with food. This includes your lunch and your fish. Keep both in your physical presence while you are fishing! Don't leave your lunch in your day pack on the river bank. Don't leave your fish on a stringer in the water. Put your lunch and your fish in your pack, and wear your pack on your back at all times. Read our article on Protecting Yourself from Bears for more details on this topic, including the use of bear deterrents (lethal and nonlethal).

Salmon also attract salmon anglers, sometimes in droves. This is especially true when it comes to the road-accessible sockeye salmon fisheries on the Kenai Peninsula. The most popular sockeye fisheries for sport anglers in Alaska are, without question, the Kenai and the Russian rivers. Thousands of anglers flock to these rivers each year to battle reds, and, in the process, to battle each other for parking, for campsites, and in some cases, even for a place to stand and fish in the river. Some protocols are in order. Here are some general things to keep in mind:

Where are the Fish?

Sockeye salmon spawn in both rivers and lakes. In freshwater, reds generally run close to the bank, whether in lakes or rivers, however, it is generally easier to catch them in moving water because the fish are oriented with their heads upstream and the current makes it easier to control your presentation to the fish. Inexperienced sockeye fishermen usually wade out to knee-deep or thigh-deep water only to discover salmon moving upriver between themselves and the bank! If enough anglers position themselves far out in the river, it usually pushes migrating fish out into deeper water, making it harder to catch them. You really don't need to be in water over your knees unless other anglers are pushing the fish out.