The practice of catching and releasing sport-caught fish is probably the most common method of freshwater fishing in Alaska. But it's much more than simply tossing a fish back in the water in order to catch another. Conscientious C&R fishermen understand the value and importance of carefully playing and landing the fish, then the proper techniques of releasing the fish so it can survive and reproduce. In many areas, adherence to these principles is much more than an ethical nicety; it's the law. Here are the "best practices" concerning C&R fishing in Alaska.

Use barbless hooks in sizes appropriate to the size of fish expected. Oversized salmon hooks can penetrate a trout's eye, permanently destroying its vison and inhibiting it's ability to find food and avoid predators. Barbless hooks are easily extracted, whereas some barbed hooks can completely destroy the bony mouth parts of either the upper or lower jaw of a fish, limiting its ability to feed. Use barbless hooks! 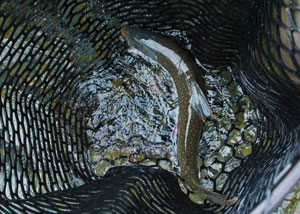 Avoid dragging fish out of the water, across gravel bars or through the dirt and grass. This removes the protective slime on the fish, which reduces its ability to ward off diseases. Removing a fish from the water also makes it impossible for a fish to absorb oxygen through its gills. Next time you pull a fish from the water, try holding your breath for the entire time the fish is out of water and you'll start to understand what's going on with your fish. Fish intended to be released should be landed quickly, and should remain in the water until unhooked, revived and released.

Use a soft landing net. Traditional mesh landing nets have knots and abrasive cords that rob fish of that protective slime layer. Use a rubberized landing net; it's much nicer for the fish.

Leaving the fish in the water while it is being unhooked can be critical to it's survival. If you were successful in playing the fish quickly, it should still have a lot of energy and will likely thrash around in the net. If you're using a rubberized net, you can attempt to gather some of the net material around the fish to contain it without rubbing off the slime. Avoid using cloth gloves; they remove slime more easily than your bare hands. Use a hemostat or a needlenose plier to firmly grasp the hook and remove it. Once the fish is unhooked, gently cradle it with its head facing into the current. This allows water to flow into the fish's mouth and over it's gill rakers, replenishing oxygen to the fish's bloodstream. Some fishermen gently move a fish forward and backward to push water over the gill rakers, but this is not necessary in moving water. When the fish is able to hold itself upright it should swim away on its own.

If a fish is injured or exhausted to the point that its survival is in question, you should consider retaining it as part of your daily bag limit, if legal. If it is not legal to retain the fish, it must be released regardless.

Problems With Catch and Release Fishing

C&R fishing is not without its critics. Some anglers believe it is morally wrong and see it as a form of abuse that should be stopped. Some subsistence users refer to it as "playing with your food". Though the debate over the moral implications rages on, there are some resource-based concerns that anglers should consider, especially in waters that see a lot of catch-and-release activity.

On popular roadside rivers such as the Kenai and the Russian, it's not unusual to see rainbows or dollies with torn or deformed mouth parts, missing eyes and so forth. Many of these injuries are inflicted by salmon anglers using larger barbed hooks. These hooks are hard to extract from a fish without tearing the fish's mouth. In the case of fish with damaged or missing eyes, they can survive, however they are of course blind on one side, making them more susceptible to predation.

Anglers should consider using smaller, barbless hooks in order to prevent needless damage to fish intended to be released.

A second issue has to do with anglers handling fish too much before they are released. It is common for anglers to remove fish from the water for photos, but this should be avoided. Net the fish if possible, and release it in the net. Use a submersible camera to take pictures similar to the one at the top of this page.

Catch-and-release fishing is not without controversy. John Nelson provides some food for thought in his essay, "The Ethics of Catch and Release" READ MORE>>