The state of Alaska is divided into 26 Game Management Units (GMU), some of which are broken into smaller subunits. This map shows each unit and subunit, and the green lines show the borders of each of the five regions in the state. A region includes all or part of certain GMUs and subunits. This site uses these regions to organize our location-specific information; refer to our Regions pages for descriptions of each. Each GMU contains species that may be unique to that area, together with different hunting seasons and different regulations from other regions. Pay close attention to the Alaska Hunting Regulations for unit-by-unit requirements and restrictions. 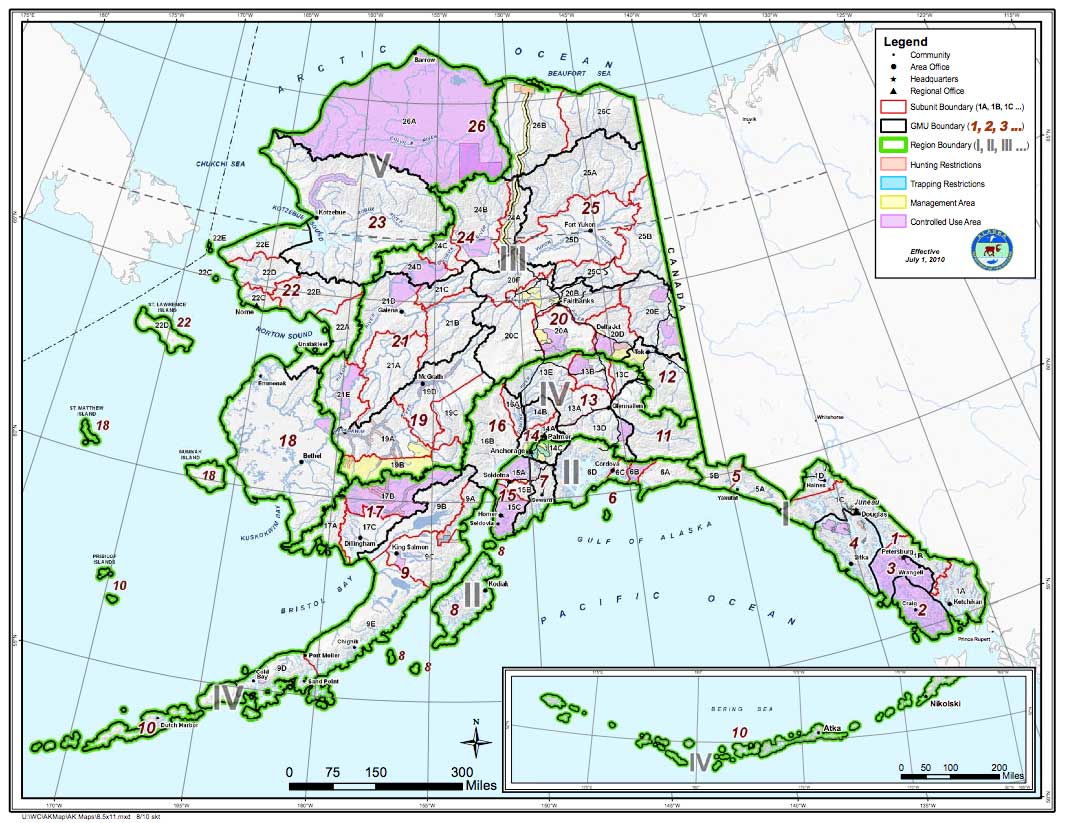 Notes on the GMU Map

If you look closely, you'll notice the darker green lines on the Unit map above. Each of these lines borders an ADF&G Wildlife Conservation Unit, which is a collection of Game Management Units and Subunits. We have organized the Alaska Outdoors Supersite around these Wildlife Conservation Units, but have made it even easier for you by breaking each Wildlife Conservation Unit into two smaller pieces. If you are looking for a place to hunt, a great way to start is by reading our pages on these areas, which also give you an overview of habitat and available species. Each of our sections also contains specific pages on hunting the area.

Region 2 includes the coastal waters associated with Prince William Sound from the Cordova area north and west. It includes the entire Kenai Peninsula, which hosts hunting opportunities for moose, brown bear, black bear, caribou, goat and Dall sheep. It also includes the storied Kodiak and Afognak islands, famous for brown bears, Sitka blacktailed deer, elk, and some of the best saltwater fishing in the state. This site divides Region 2 into "east" and "west" subregions. The eastern section includes the North Gulf Coast area and the Kenai Peninsula, while the western section includes the Kodiak / Afognak Islands area.

Southcentral Alaska contains the population center of the whole state, with the communities of Anchorage, Palmer, Wasilla, King Salmon, Dillingham, and many others out along the Alaska Peninsula and into the Aleutian Islands to and past the tiny community of Adak. Waterfowl hunting is good, as is big-game hunting for moose, caribou, black bear, brown / grizzly bear, and Dall sheep. There are many affordable opportunities for flight-seeing, and great opportunities for snowmachining the back-country in the winter months.

The Arctic is truly "the land of the midnight sun", with days growing noticeably longer during the spring bear season and though the daylight is waning in the fall months, you can expect long morning and evenings; prime times for hunting. This region is mostly inaccessible by road, however several airlines serve the villages scattered throughout the area, so access is good. Once you arrive in a village, any of a number of commercial air charter services offer wheel, float plane, or ski plane access to remote locations. Hunting opportunities include caribou, moose, black bear, brown / grizzly bear, Dall sheep, wolf and muskox.