Like many Alaskan-born people of a certain age, I was raised on hand-me-down gear supplemented with my father’s poor fitting extras when necessary. The standards we’ve become accustomed to of gear that is dry, light, and comfy? Ha! Though I remember my childhood family adventures fondly, dry and comfortable were not apt words to describe it. Wet, clammy…and itchy, always itchy. My parents were firm believers in wool socks, much to my dismay. Wool of that era was certainly warm, but at the cost of discomfort that could rival the worst rash.

As gear improved in the 90s and into the 2000s, I made the switch to synthetic fibers. There were many benefits, but I must admit that for some uses I have never been fully pleased with their performance. In particular, I’ve always found synthetics lacking for most insulation needs, be it near-body base layers, jackets and sleeping bags, or hats and gloves. So I jumped on the resurgence of natural fibers with vigor. I’ve become a firm believer in the improved versions of the fibers of my youth – treated down for loft and warmth, merino wool for base layers that don’t itch – but in all of my gear research over the past decade or two, I must admit that I had never tried nor even heard of boiled wool, nor have I tried gloves made of a natural fiber.

Boiled wool products are treated with water and agitation after having been woven into a fabric, and the end result is a product that is much denser, warmer, and resistant to wind. As an added benefit, the product will resist further shrinking when exposed to water. Though I have only owned these items for a single season, I can attest to the accuracy of the above statements – they are indeed warmer and more wind resistant than most items I have tried over the years. Having not previously heard of boiled wool, I began as a skeptic, but I can certainly see a place for these products in my gear collection from this point forth.

Our test included wool gloves and a stocking cap. We did not have a chance to field-test the sweaters and other products.

Though subzero temperatures have been non-existent this winter in Southcentral Alaska, I wanted to put this gear through the wringer as much as possible to reflect the varying field conditions that our site members experience in a typical Alaska winter. I used the gear on two remote snowmachine trips, while hunting small game, and while doing work around the yard and sledding with my kids in snowy conditions.

In each of these tests, one thing that really stood out to me is how warm and dry the gloves stayed even when coated in snow. Depending on the specific manner of use, snow would at times adhere to the surface of the gloves, but I could never sense a change in temperature as a result. In addition, even when in direct contact with snow for extended periods of time, no moisture ever reached my fingers. I know that wool is known for retaining its insulating properties even when wet, but I was quite impressed at how well these gloves performed in the snow. Furthermore, I was able to handle cold metal objects for long periods of time with similar results. While hunting snowshoe hares in single digit temperatures, my hands were in near-constant contact with the metal portion of my shotgun for hours. When using gloves with synthetic insulation coupled with a leather palm in the past, I have had to frequently change hands and positions on my firearm due to increasing sensations of cold from the transfer of heat to the metal. On this day, though, no such adjustments were needed and my hands remained toasty warm. Even when not moving for extended periods up to a half hour, these gloves kept my hands warm. 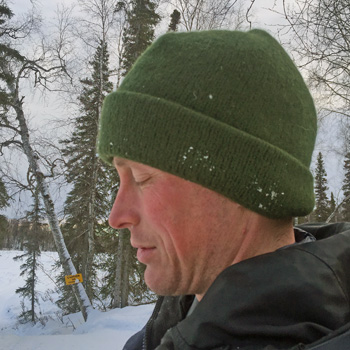 As for the hat, it was tested under the same conditions and offered similar warmth. Furthermore, it showed itself to be impressively impervious to the wind. While the gloves were mostly shrouded from the wind while I was riding my snowmachine, my head was exposed while I drove at average speeds of 30-40 mph. Compared to my other hats, this one was impressive in its ability to keep my head insulated from the wind and cold. Even compared to other wool hats I owned, this one was far and away better at blocking the wind – something I assume can be attributed to the boiling process involved in preparing the wool. My only complaint was that it was arguably too warm for my head under the test conditions. At a range of 5 to 20 degrees, I would prefer a lighter weight version. Being too warm is preferable to the alternative, though, and I was appreciative of the assurance of staying warm were I to be in the field longer than planned. I will also say that the hat seemed just a touch itchy, which is something I did not experience at all with the gloves.

A brief note on the fit of these items: The product website includes instructions on measuring one’s hand to get the proper fit. I followed these instructions to the best of my ability, yet the fingers on the gloves are approximately ¾” too long. It hasn’t hampered their performance, but if I were to order these gloves again (and I very likely will), I would probably go a ½” smaller than what I measured. Regarding the hat, it is advertised as one size fits all, but of course there are always going to be exceptions to such a blanket sizing statement. I have a particularly large head (fitted cap size of 7 ½), and I do find this hat to be just a bit too snug. For the vast majority of people, this hat should fit well and be a wonderful addition to your winter gear, but for those with heads that are significantly larger than normal, you may find that the fit is a bit too tight.

Overall, I was pleasantly surprised by how thoroughly I liked my Dachstein Woolwear alpine cap and gloves. For winter months when there is work to be done, or fun to be had, where my hands will be exposed to cold objects and snow for hours on end, I have no doubt that these will remain one of my go-to choices for gear. Their combination of warmth, water-repellency, and wind resistance, coupled with the comfort of natural fibers, is tough to beat.