Caring for Your Catch

Alaska offers the richest, most diverse, and most abundant salmon resource in the entire United States. Additionally, saltwater species such as halibut, lingcod and rockfish are greatly desired on the dinner table. Finally, freshwater species such as Dolly Varden, trout, grayling and others are a special treat enjoyed in the field, or at home, many months after the outing.

Many anglers spend thousands of dollars just to have the opportunity to catch these fish, and for good reason. Besides the beautiful places where they are caught, and the many benefits of recreating in the great outdoors, Alaska's fish are among the most nutritious whole foods on the planet. It's in your own best interest to take excellent care of your fish. If you do it correctly, you will have stocked up many delicious meals for months to come. 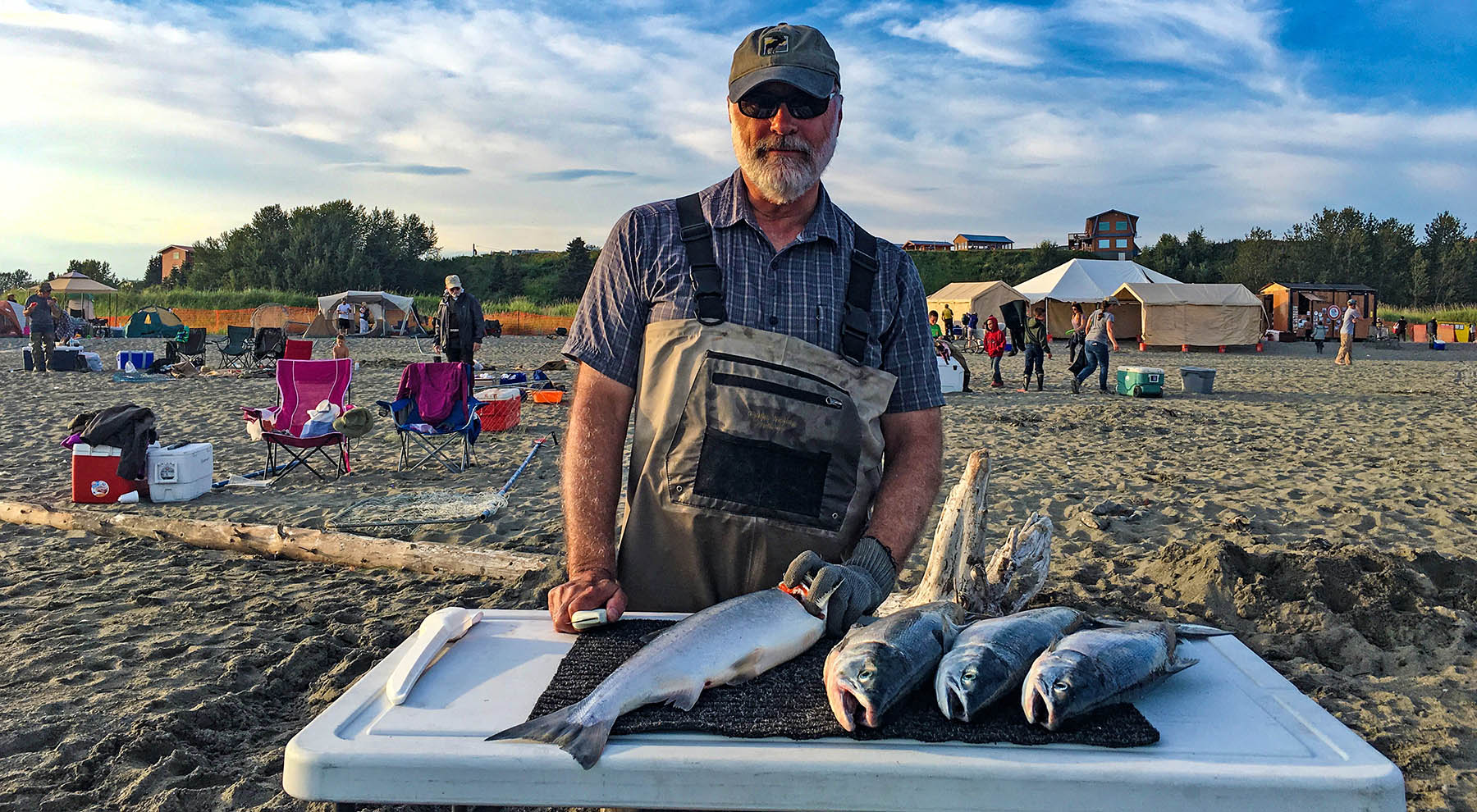 Sadly, many fish that were in perfect condition as they left the water end up a total waste because of poor handling. Killing any living thing is a pretty big deal, although taking a fish or animal's life for food is completely necessary and understandable. But there is no good reason to waste such a magnificent creature by simple carelessness or sloppy work. The purpose of this section is to provide you with the information you need in order to return home with prime food for the table.

The proper care of your fish starts with having the right tools. You don't need much, but a few basic items will make the job easier and cleaner. Here is a list of the processing equipment you should have with you:

The Proper Steps in Preparing your Fish

It's important to have a plan in advance so you are prepared to deal with your fish. Part of that plan involves being aware of the natural processes your fish will go through from the time it leaves the water to when it ends up on your plate. A freshly-killed fish is very limp, but after a time it stiffens as it goes through rigor mortis. Once the fish passes through rigor mortis, it becomes limp again. The science of exactly what goes on in the muscle tissues of the fish during this time is not well understood, however it has been established that fish that are quickly cooled (iced) take longer to go through rigor mortis, and the result is a fish that's at it's peak of flavor and texture. So this is our Gold Standard: properly handled fish in the field, resulting in superb eating on the dinner table. From a practical perspective, the steps necessary to get there are not always possible. Fish caught on a remote river are often consumed the day they were caught. Fish caught on a charter trip are usually handled by the boat crew, frequently omitting gentle handling, bleeding, dressing, and proper icing. Dipnetters face difficult and unique challenges by the sheer volume of fish they must process in a short period of time. Be that as it may, the following steps represent the ideal process you should follow if at all possible.

For additional understanding of this topic, we have posted a guest article by Jon Rowley, a retired commercial salmon fisherman from Southeast Alaska and restaurant consultant focused on how to produce high-quality seafood. The article discusses the science behind proper fish care in the field, and it will make a difference in how you handle your fish. You can find that article AT THIS LINK. 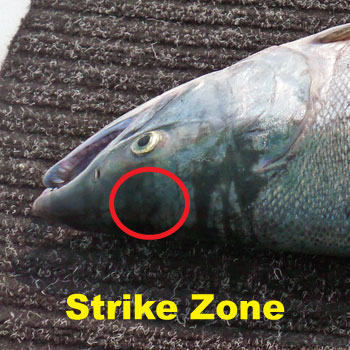 Proper fish care starts before the fish is landed. Bring the fish in quickly, with minimal stress. This prevents lactic acid buildup that can give the fish a less than perfect taste. A sharp blow to the top of the head immobilizes the fish. This keeps it from flopping around and getting bruised during the struggle. The target area is immediately or just behind the eye sockets, from the top of the head. If you hit it too far forward or aft, you miss the brain and will bruise the flesh or cause additional suffering. At this point the fish is unconscious, and it's heart is still pumping. This is the best time to bleed your fish. Cut or rip out a couple of gill arches on each side; the gill arches have an artery that runs through each one, and by severing them you allow the heart to pump out the blood. Removing the blood quickly has a positive effect on the flavor of the fish, and it reduces suffering.

The very next step is to remove the viscera and gills. One area of potential difficulty is the kidney, which is the dark mass that sits up against the spine in the upper part of the body cavity. Some knives contain a spoon-shaped scoop at one end that works nicely for removing this organ.

The fish should be packed with ice as soon as possible, before rigor mortis sets in. The fish should be kept as straight as possible, otherwise if it goes into rigor with the body curved one way or the other, the muscle tissues can separate, a condition called "gaping". For the best quality fish, position the dressed fish in ice, keeping them straight, and pack the body cavity with ice. In the commercial fishing industry, flaked salted ice is used, which keeps fish much colder than conventional ice. This type of ice is available in many port cities in Alaska, so load up your coolers before departure. This allows you to properly ice your fish in the field.

Cold-Soak Your Coolers! Believe it or not, some parts of Alaska get quite warm during the summer months, leading to melted cooler ice and spoiled catches of fish. Pre-cool your coolers by loading them with ice the day before your trip. Park them in a cool area, out of direct sunlight. The ice will melt somewhat as it cools the insulating liner of the cooler, so just before you depart for the fishing trip, drain any melted ice and replenish the cooler with fresh ice. Cold-soaking your coolers in this way will greatly assist in keeping your catch cold!

If at all possible, the fish should go completely through rigor mortis before filleting or steaking. This may take as many as three days, during which the fish should be constantly monitored for ice melt, and to determine when rigor has passed. At that point, the fish can be filleted or steaked and cooked or frozen for future consumption.

It's not always possible to follow each of the above steps precisely, and in such cases you have to make do with what you have. That said, the most critical steps are stunning the fish, bleeding it, gutting it, and icing it certainly within an hour of catching it. If you can at least do that, you will see a dramatic difference on the dinner table.

How to Fillet a Salmon

Filleting a salmon is a three-step process that all Alaska fishermen should know how to do. Here's how it's done, with numbers in reference to the illustration below.

To begin, give the fish a thorough rinse with clean water. Remove all sand, dirt, debris and blood from the outside of the fish. Make an incision just behind the pectoral arch (1), the bone just aft of the gill cover. This cut should slice forward toward the top of the head, and describe a curve along the pectoral arch to the midpoint of the belly (3). Most fishermen leave the pectoral fins (2) attached to the pectoral arch. This incision should go all the way down to the spine (but not through it). Next, slide your fillet knife flat along the spine, taking care to avoid severing the spine. The incision should ride along the midpoint of the belly, just above the dorsal fin (4), between the pelvic fins (5) and over the anal fin (6). Note that as you make this cut, your knife will sever the rib bones from the spine along the way. Some fishermen attempt to leave the rib bones on the carcass, but this usually results in a lot of wasted meat. You will remove the rib bones from the fillet after you remove the fillet from the carcass. Continue the cut until you reach the caudal fin (tail) and remove it entirely from the carcass. Next, slice off the pelvic fin that's attached to the fillet. Finally, turn the fillet skin-side down and make a shallow cut from the exposed edge of the rib bones, and fillet them from the fillet itself.

Some fishermen retain the pectoral arches (minus the head), with the attached pectoral fins, for the smoker. They also make for great soup stock or can be prepared in other ways.

We've got you covered! Check out the Fishing Menu on the left side of this page, or click one of the links below for more information.

Check out the following links to the various fishing locations in Alaska.