It's been said that you can choose your friends, but you're stuck with your relatives. Nowhere does this association come with such mixed connotations as it does with the northern pike family. The pike family includes the muskellunge, which grows to a larger size than the northern pike, and the redfin pickerel (which rarely exceeds ten or twelve inches in length). 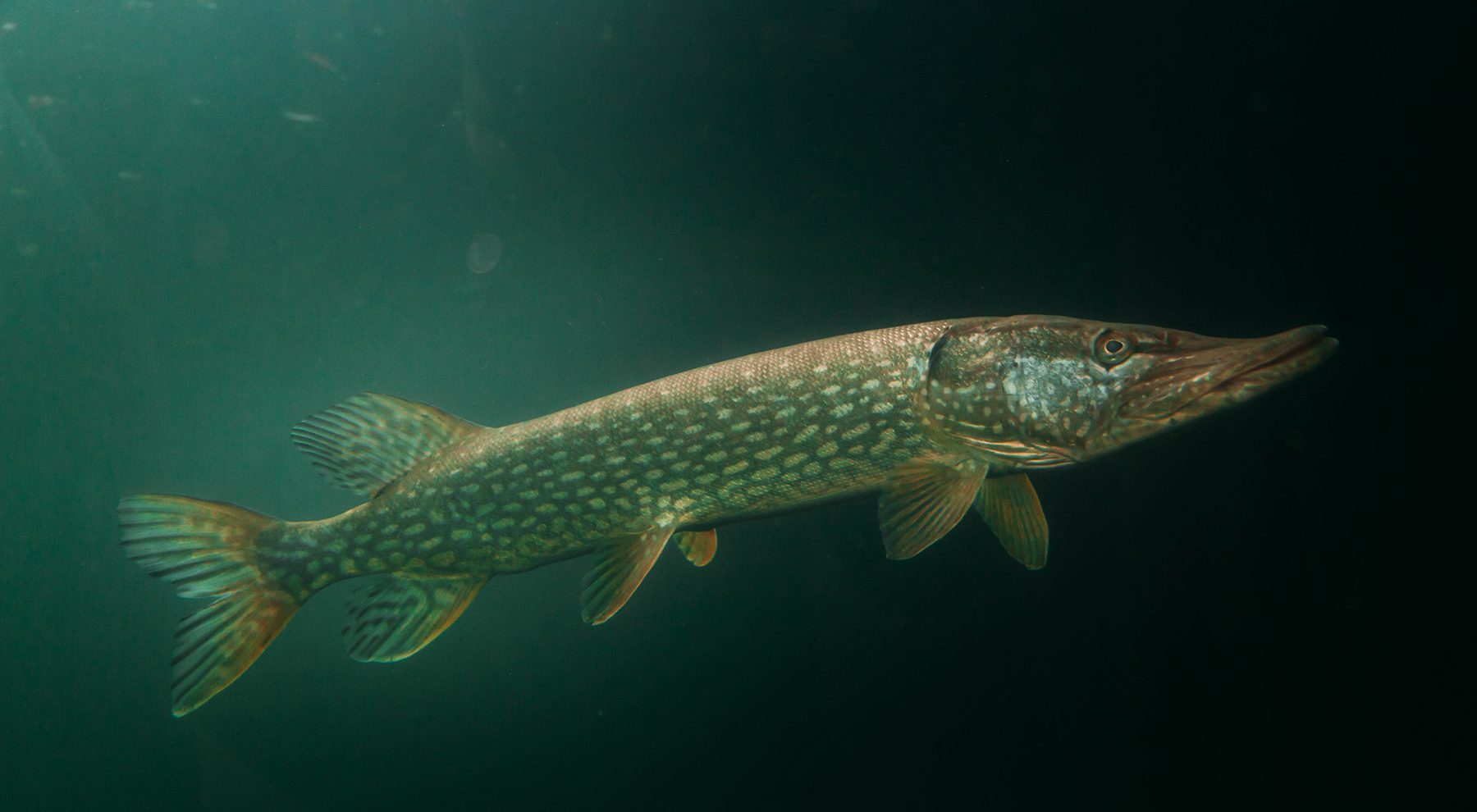 They are sometimes known by the literal translation of their Latin name, esox lucius, or, water wolf. It's a well-deserved name. Pike are both voracious and utterly fearless.

In Alaska, the northern pike is a fish that is appreciated by some people and unwanted by others. Northerns are native to most of our 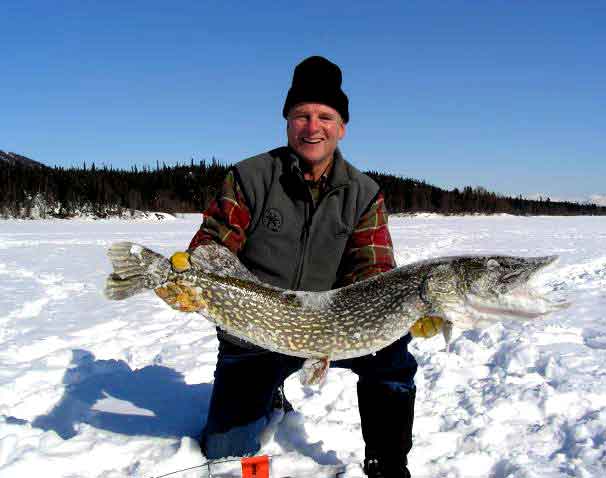 state but not Southcentral and Southeastern Alaska. Northern pike occur naturally throughout most of Canada and the northern tier of United States, as well as much of the northern hemisphere, including Russia and Europe.

Northern pike were accidentally or purposefully introduced into the Susitna River drainage and several lakes in the Anchorage area and the Kenai Peninsula. Therein lies the problem with northern pike. Where they are native they are mainly enjoyed; where they are introduced, they are not. Why not? It essentially comes down to two things. The northern pike’s preferred habitat and its eating habits.

During most of the year, northern pike prefer lake margins or slow moving water where they hide among weeds or rocky areas. Northern pike are carnivorous sight feeders and they ambush their prey. They are perfectly camouflaged in the weed beds. Their slender body allows them to slip easily among the weed stems. They hunt slowly through an area or simply lie in wait until they are close to a target. When they have prey in sight, they take aim and their body slowly flexes until the tail fin is whipped in a powerful stroke and the body shoots forward. The mouth opens forcefully, the gill covers close, and the suction draws in the prey. A full mouthful of long, sharp teeth grasps the prey.

What is their preferred prey? Fish. All kinds of fish, including smaller northern pike. Actually, they enjoy a diverse menu that may include frogs, small birds, mice, and voles. Throughout much of Alaska, whitefish appear to be the main food item, but, of course, they will eat any vulnerable food. Here is the problem. Wherever northern pike habitat overlaps with that of other small fish, the other small fish usually are the ones that get eaten. That means that trout and young salmon are at risk of becoming northern pike food.

Northern pike are not particularly migratory, but during winters, northern pike move to deep water in lakes and rivers. In early spring, soon after the ice has melted, they move to shallow shoreline areas where they spawn in marshy areas or flooded grassy areas. The male and female go through a courting behavior and simultaneously eject eggs and sperm. Northern pike do not make a nest but the fertilized eggs are scattered and left unguarded by the parents. Hatching occurs in a few days to a month, depending on water temperature. The first foods eaten are small zooplanktonic crustaceans, like cyclopods and daphnia. As they grow, they begin to feed on aquatic insects and small fish. By the time they are about two inches in length, they are almost entirely piscivorous. Northern pike prefer soft finned prey and whitefish are often the prey of choice.

Northern pike can get quite large and they are popular with anglers and subsistence users. Northern pike achieve maturity

at a size of between about one and two feet in length and a age of about two and three years of age, depending on conditions. They have been reported to live for as many as thirty years. The largest sport-caught northern pike in Alaska weighed 38 pounds and 8 ounces. It was caught from the Innoko River in 1991. In Alaska, a northern pike longer than 40 inches or 15 pounds is considered trophy-sized. One report indicates that the world record northern pike weighed 55 pounds and was caught in Germany in 1983.

Northern pike are loved or hated. It all depends on your perspective. If you like to catch and eat big fish, they are good to have around. Where they are invasive, northern pike are often despised.

How do you think northern pike could have become introduced into southcentral Alaska? I like to believe that it could have been unintentional. In my preferred scenario it could be that an angler simply that flew out to Bristol Bay and caught some northern pike. They were dropped into the floats of the plane, which also contained enough water to slosh around, and flew home with the intent of cleaning the fish later. When home, the angler was distracted by other work and the fish were unceremoniously dumped overboard. All it took was one male and one female to survive and the deed was done.

Do you think it was intentional? Why would someone do that on purpose, by choice? Simply because they like to fish for northern pike. These are the folks who enjoy and appreciate northern pike. Why would there be the problem? Northern pike coexist with other fish in other parts of the state, right? Except, they don’t occupy the same parts of the same habitats. Clearly, in southcentral Alaska, there have been serious unintended consequences. Northern pike have taken full advantage of available habitats. They are eating machines. They eat what is available, including other northern pike. When the prey species have been eliminated and only northern pike remain, the habitat becomes overpopulated and the individuals become stunted.

After northern pike have been introduced into an open system, such as the Susitna drainage, they will migrate to any connected waterbody and they are impossible to eradicate. Somehow, they were introduced into several landlocked lakes in the Anchorage area. The eradication process is time consuming and costly. It involves treating the entire system with a fish poison, rotenone, which interferes with the uptake of oxygen from the water by the gills and the fish suffocate. It is pumped into the deep water and sprayed in the shallow areas. All fish in lake are killed. When the rotenone detoxifies, other preferred species can be reintroduced.

Northern pike in Alaska are a good example for why people should not take it upon themselves to introduce any fish to a new location. The actual outcome is not easily predictable.

How is it for you? Is the northern pike a flower? Or a weed?

(this article is by Bill Hauser)