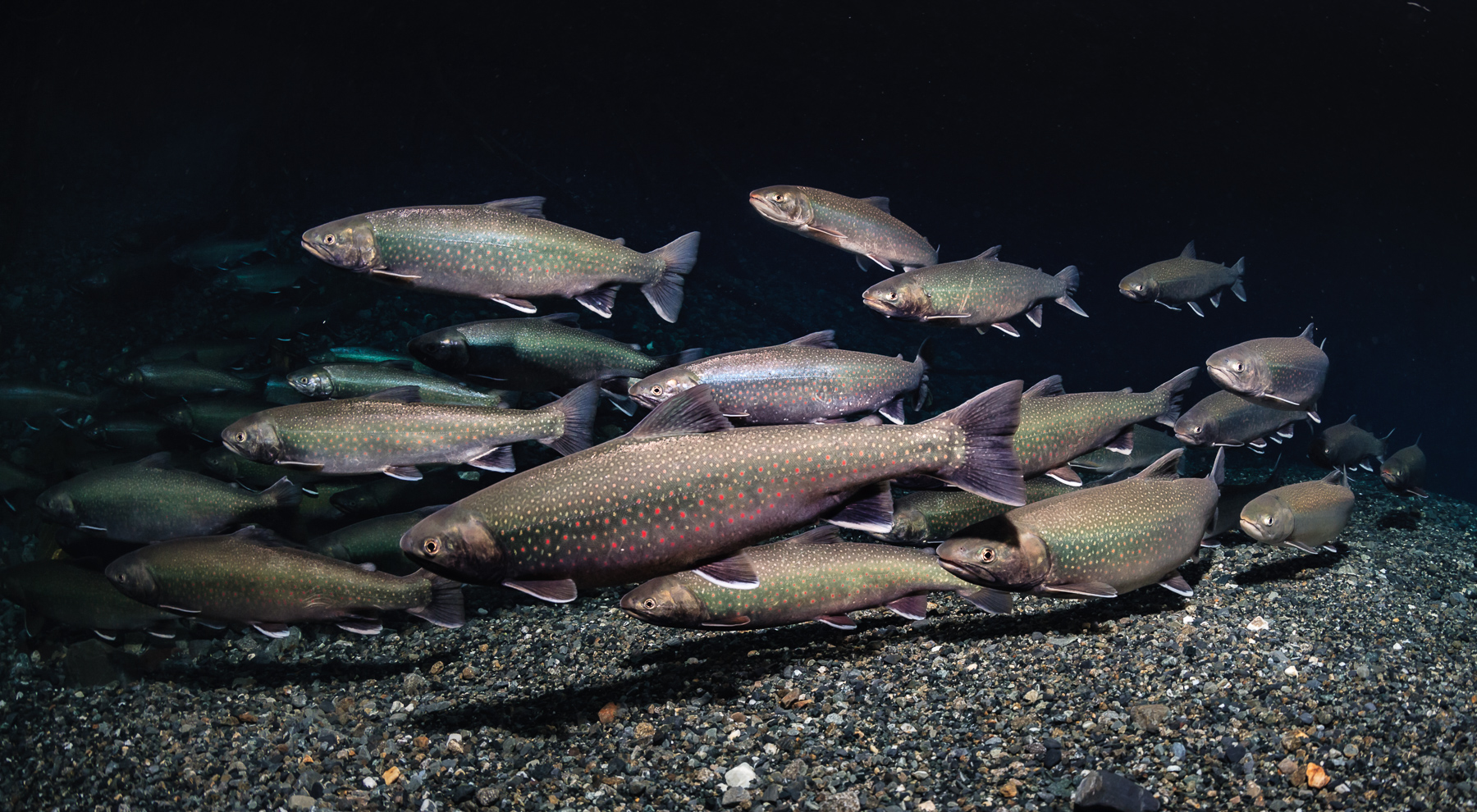 Alaska has four species of char; lake trout, brook trout, Arctic char, and Dolly Varden. Char are distinguished from trout by the presentation of spots on their body. Simply put, char have light spots on a dark body, and trout have dark spots on a lighter body. Dolly Varden get their name from a colorful character in the Charles Dicken's novel, "Barnaby Rudge." In the 1860s a green fabric with red dots became fashionable and was named after the character. Alaska's Dolly Varden have a grayish-green upper body and are adorned with red to pinkish spots throughout. 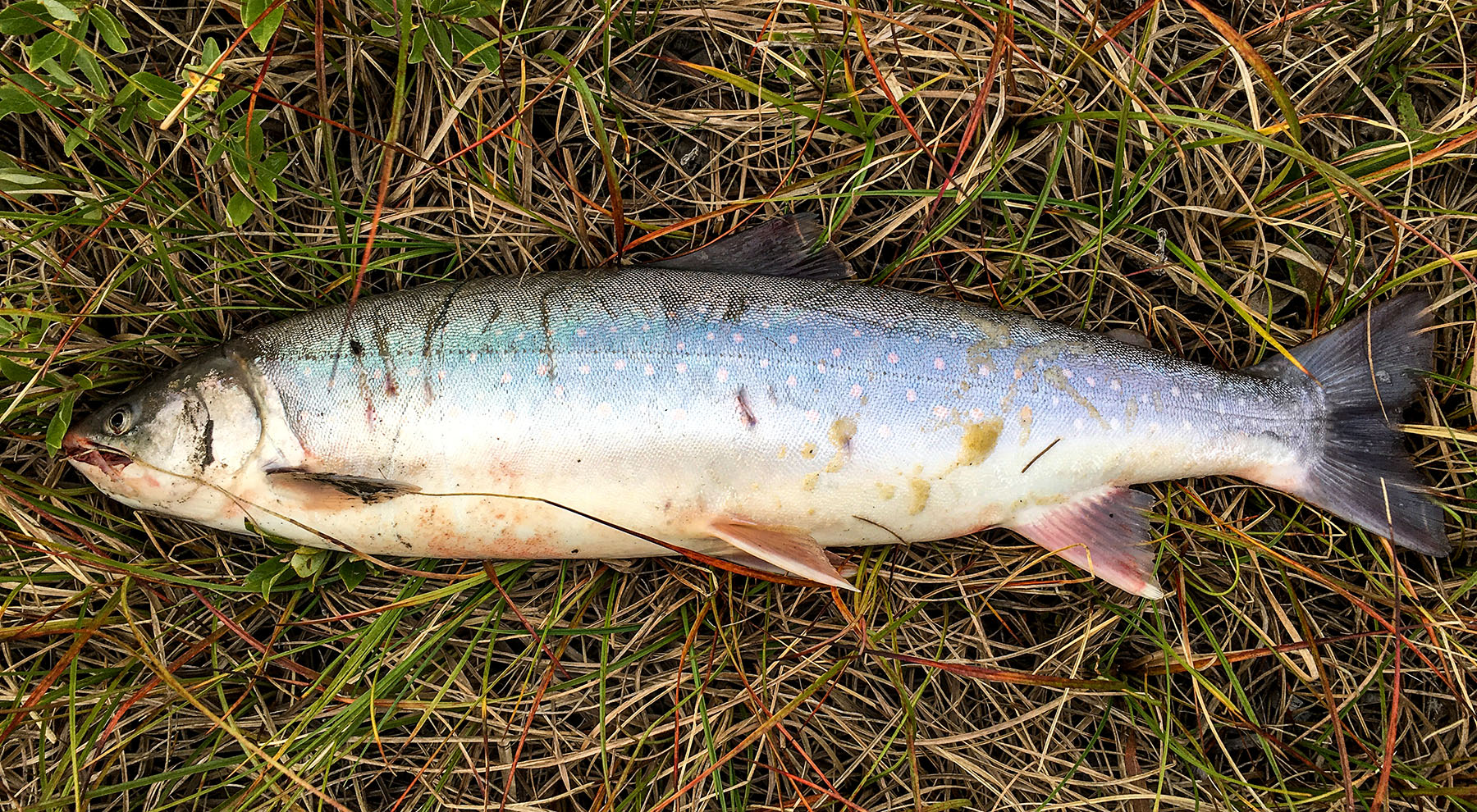 It's impossible to talk about Dolly Varden without mentioning Arctic char. That's because their similar coloration and their overlapping ranges have anglers mistaking one for the other. For this reason, the Alaska Department of Fish and Game merges the bag limit as "Arctic char/Dolly Varden" without separating the two species. 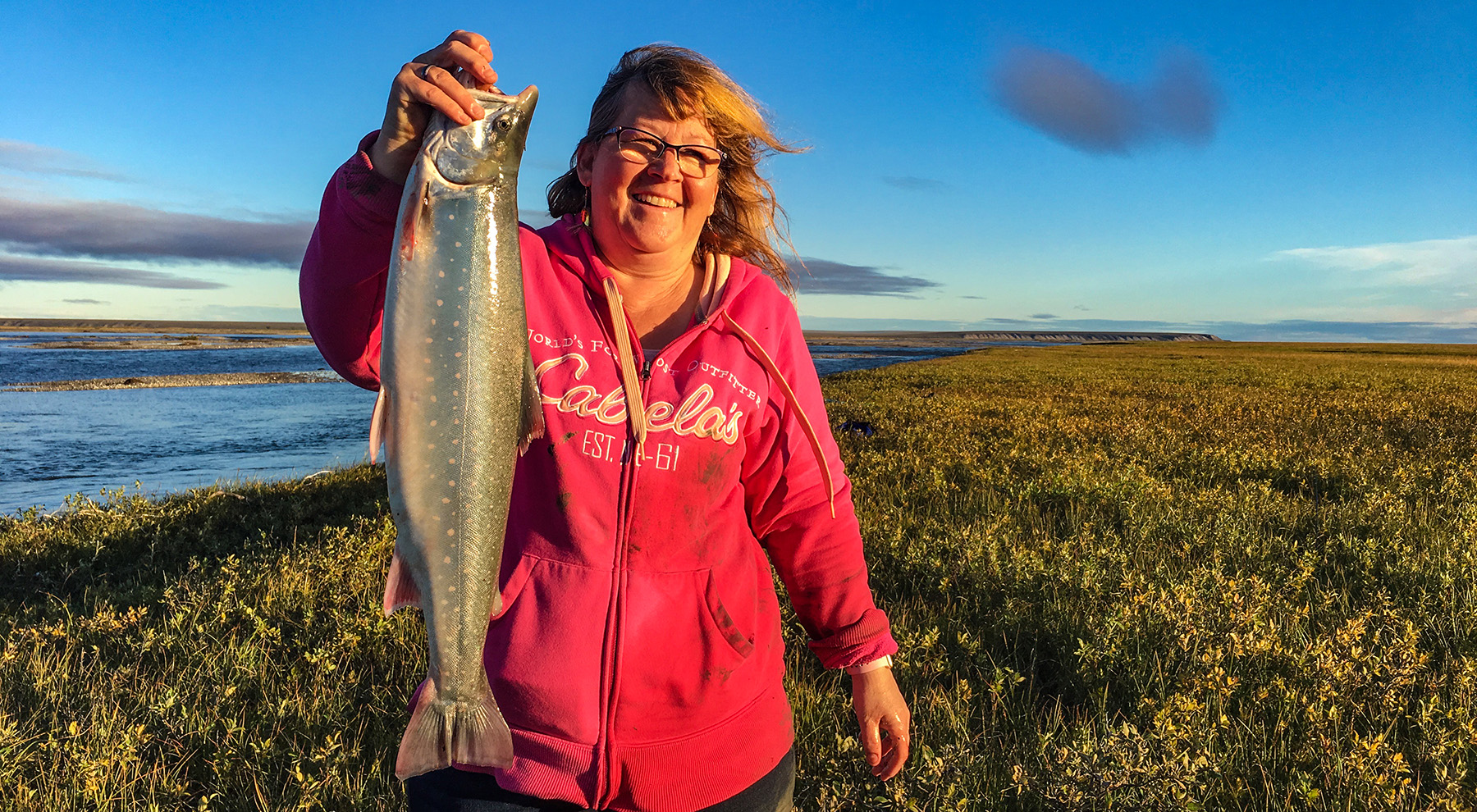 According to some, the easiest way to tell a Dolly from an Arctic char is that the Arctic char has a deeply-forked tail and presents spots ranging from cream-colored to orange. Some say that Arctic char have a bronze to yellowish body, whereas the Dolly is more of a darker greenish hue. That sounds pretty clear in print, but in the field, it's often a different story. Both fish go through color changes as spawning approaches, from a silver hue with dim spots to brighter colors, fins trimmed with white and black, orange bellies, and other colors. The colors are so bright that some anglers refer to it as a "clown suit."

Dollies exist in two varieties in Alaska, but there is no practical way to distinguish between them in the field. The northern form can reach sizes in excess of 25 pounds and is distributed from the north side of the Alaska Peninsula north and east into northern Canada. They are also found in the Susitna River watershed. The southern form extends from Southeast Alaska to the south side of the Alaska Peninsula and includes fish in the Kodiak-Afognak archipelago. Dollies exist in both resident and anadromous forms, with the resident fish being generally smaller. Sea-run Dollies spawn multiple times in their lifetime, with spawning taking place from September into November, depending on location. Sea-run Dollies migrate to sea in the spring and return during summer as the salmon migrate upriver to spawn. 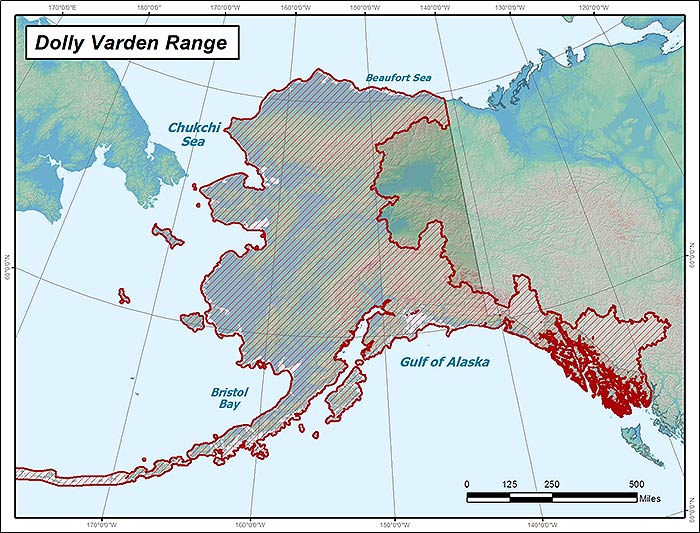 Dolly Varden are found throughout Alaska, except for sections of the interior against the Canadian border. That said, rivers in the western Arctic have achieved a reputation as trophy-sized Dolly Varden / Arctic char waters. The Noatak, Kivalina, and Wulik Rivers are notable for trophy char production. There is also outstanding Dolly fishing in the Kenai watershed, tributaries to the Kuskokwim, the Naknek watershed in Western Alaska, and the Becharof Lake area. 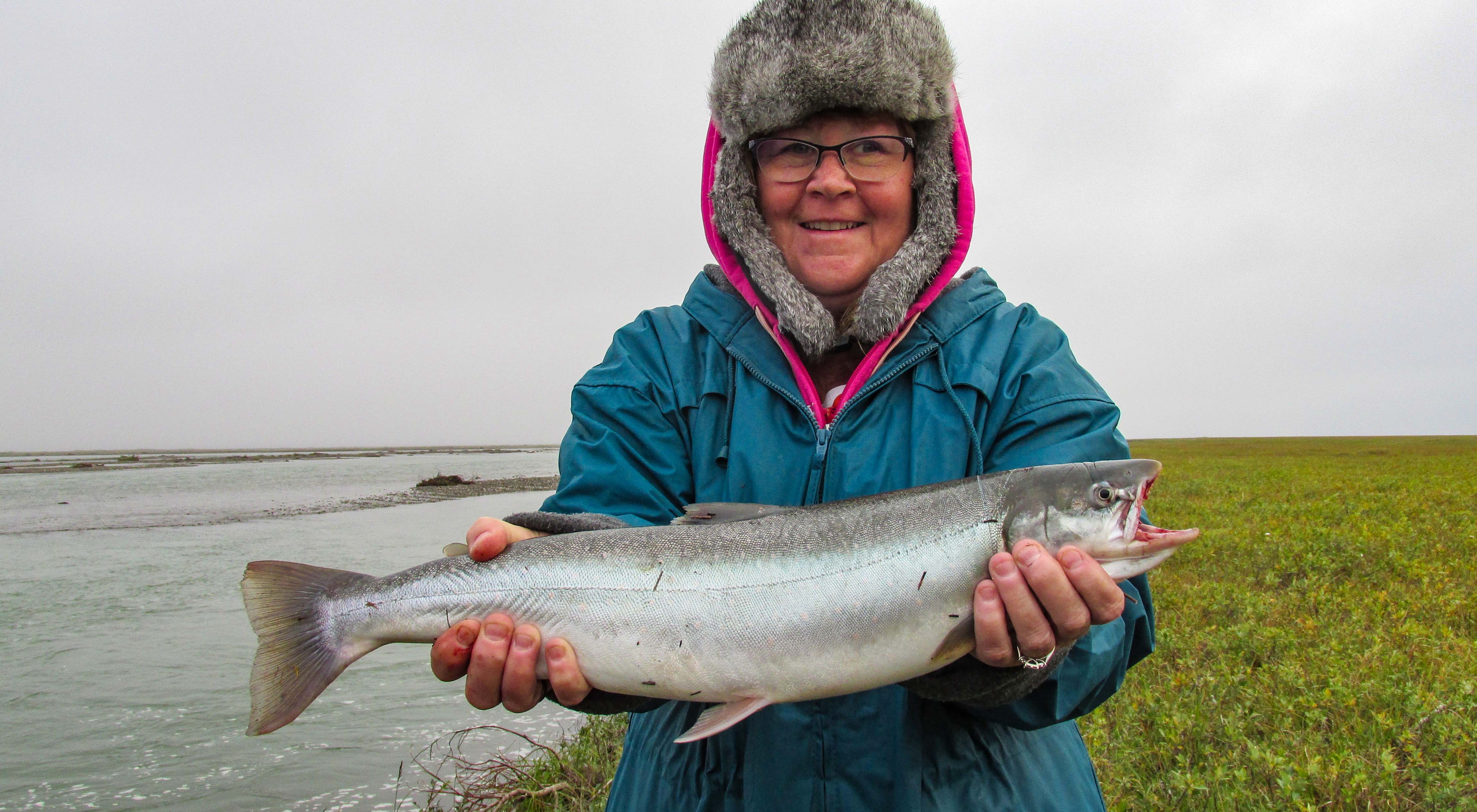 Catching Dolly Varden involves knowing what's going on with the fish at different times of the year. During the spring months, starting with ice-out and continuing well into May, Dollies actively feed on out-migrating salmon alevin (newly-hatched fry with the egg sac still attached) and smolts that have over-wintered in the river. At this time, fly-fishing with alevin and smolt patterns or any pattern resembling baitfish can be very effective. Spin-fishermen should select small spoons and spinners. Lake outlets or inlets are ideal locations as these become ice-free earliest, and salmon fry congregate there. The same holds for the upstream or downstream ends of pools in a river. Baitfish feed on insects, and these are primary feeding locations for baitfish and for Dolly Varden. Sea-run Dollies migrate out in the spring and are much harder to catch because they aren't actively feeding at this time. But once they reach the estuaries near the coast or actual saltwater, their feeding instincts go into overdrive. Take advantage of this by focusing your sea-run Dolly efforts on river mouths in the spring. 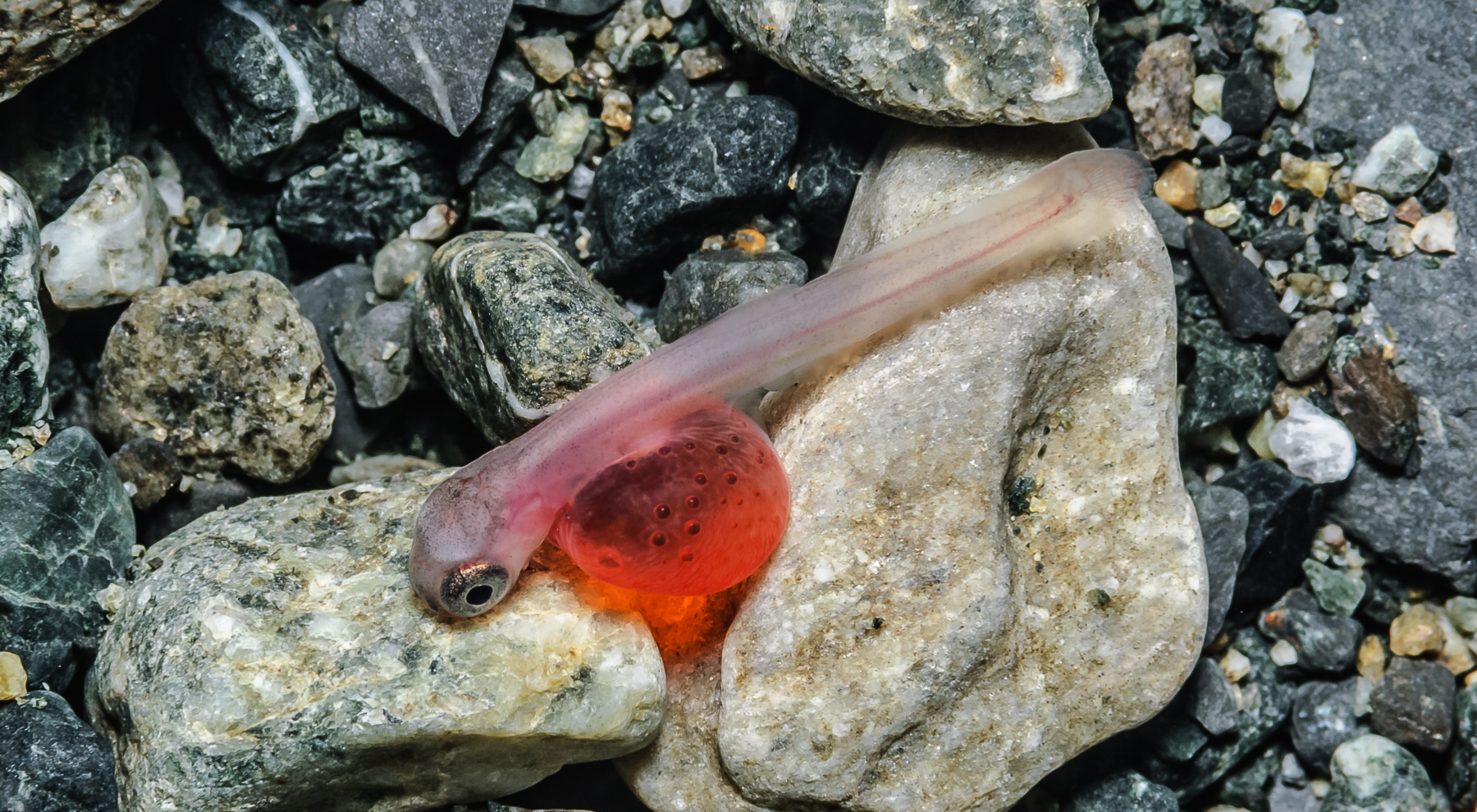 With the onset of summer, salmon will begin their runs upriver to spawn. Dollies follow the salmon to feed on the eggs, and you'll find them in deeper pools where the salmon are. There won't be any eggs early in the season, but salmon fry remain in rivers for a year after hatching, depending on the species. King salmon fry remain in the river for a year before migrating out, while coho and sockeye fry may spend from one to three years in freshwater. That means there is plenty of feed around for Dollies year-round. 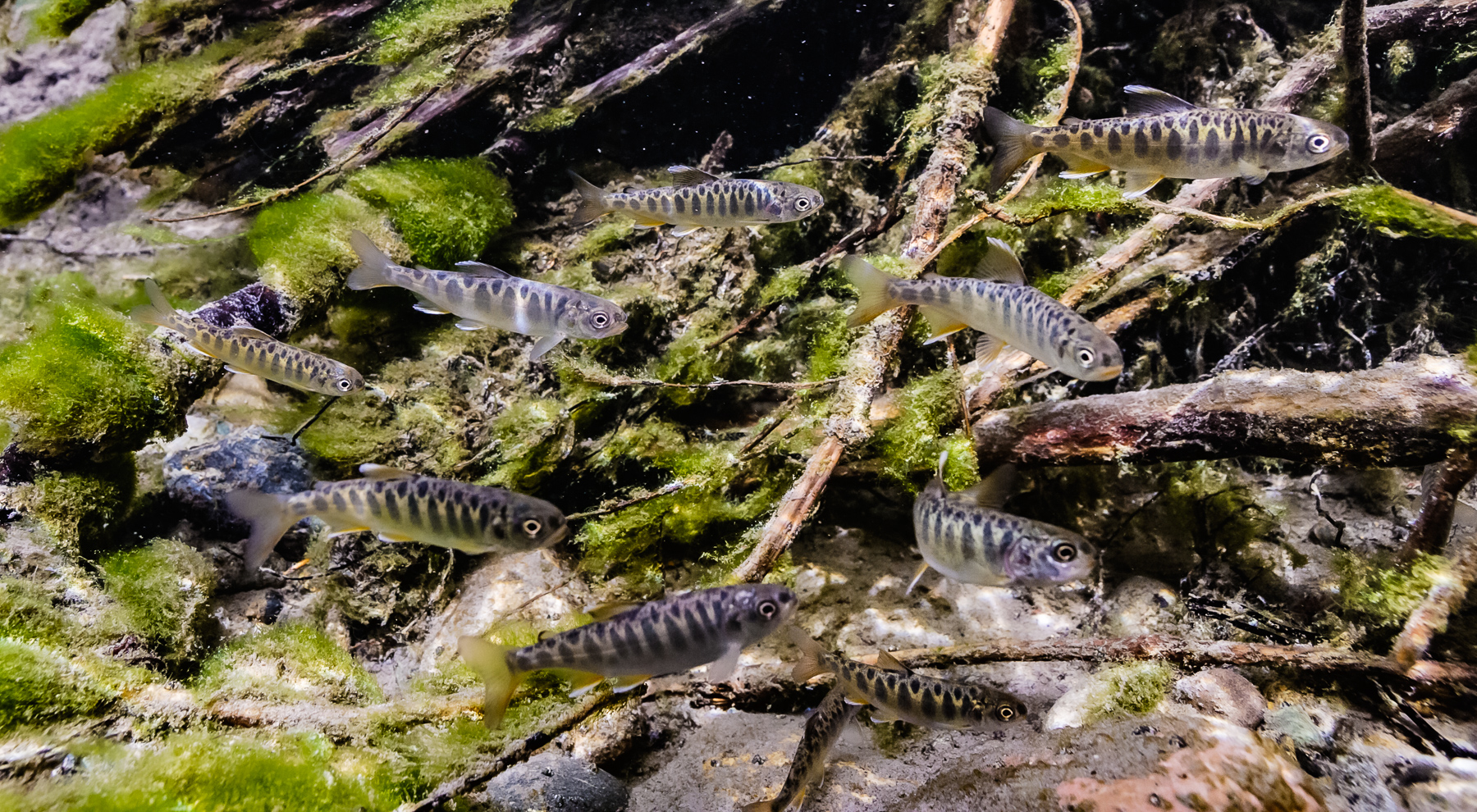 As salmon commence spawning, Dollies move in to feed on eggs aggressively. Some Dollies will forcefully ram spawning fish to cause eggs to drop. King and sockeye salmon spawn in June and July, coho spawn from August into November, pinks spawn from late June through mid-October, whereas chums spawn in the fall. The exact timing of spawning varies from region to region, so you have to know something about the area you're fishing to know the best time to target Dollies with salmon egg patterns. During this time of abundance, Dollies will gorge themselves to the point that they stop feeding for a time, particularly on rivers where the accumulated mass of salmon eggs could be two or three feet deep on the bottom of some pools. 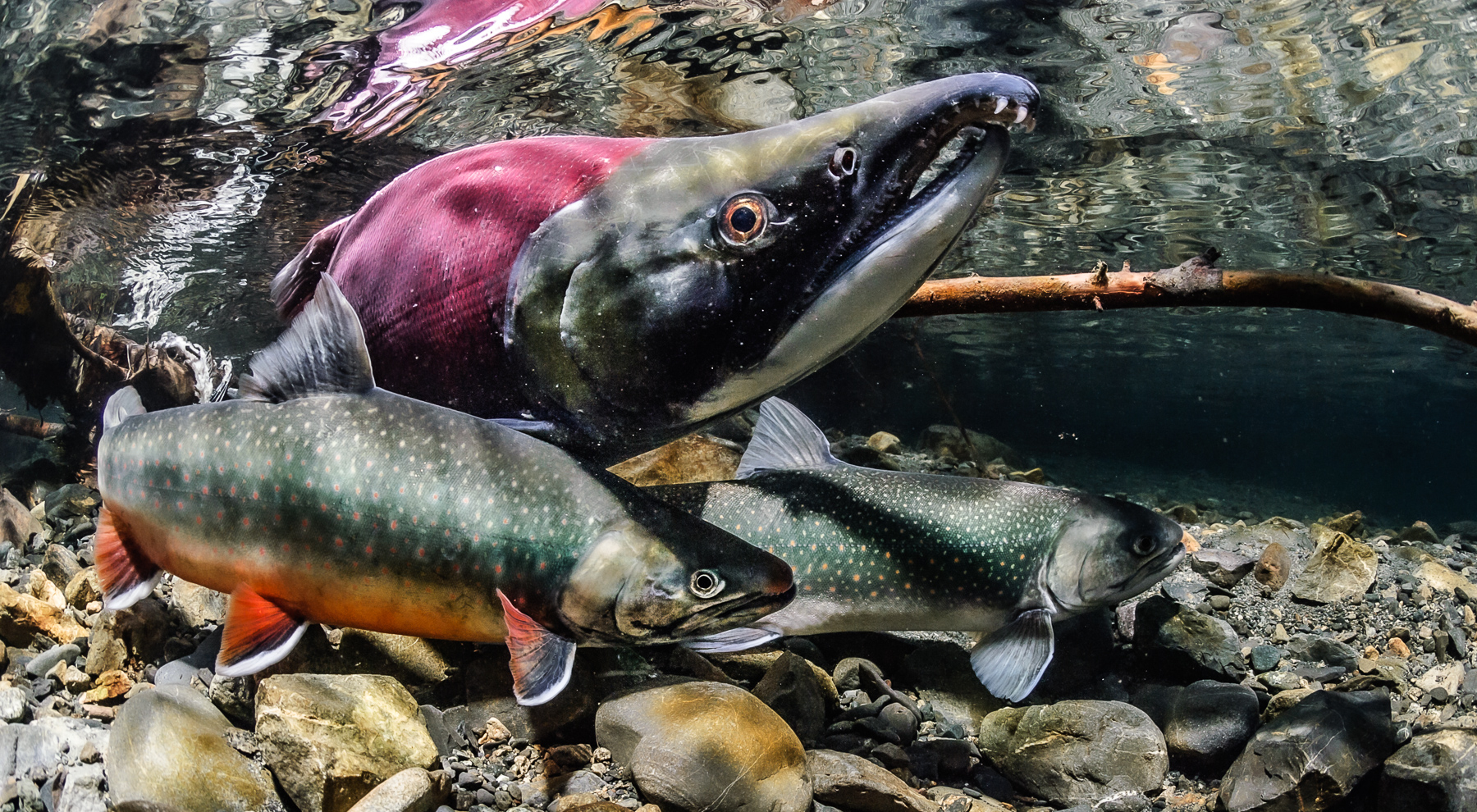 Because eggs are available in some systems well into fall, salmon egg imitations should be in your fly box at all times during summer and fall. Dollies will switch back and forth from eggs to fry, so flexibility is key.

The timing for prime Dolly fishing depends on the watershed. In South-central streams, the sweet spot for Dollies in spawning colors is late August through October. In Western Alaska, you should be out there any time from July through October, and in the Arctic, you can back that up a month to August through mid-September. That's when the fish are prime and easily caught.

Gearing up for Dollies is similar to gearing up for rainbow trout. Both species feed on the same forage species, and if you're set up for one, you're rigged for both. Here are some ideas.

Most Dolly action is near the bottom where eggs and baitfish are usually found. A floating line can work in shallow water, but overall you are better off with a sink-tip line. Leader length can vary from seven to nine feet or so and should be anywhere from 4lb. to 8lb. (1x-5x or so.) Flies will be egg imitations, attractors, or streamers designed to look like baitfish. Streamer fly sizes should range from 2-6. On occasion, you can catch Dollies on dry flies in shallow water, particularly in the early or late hours when fish will be feeding in shallow water or near cut banks. In that case, you should switch out to a floating line and a lighter tippet.

Go with medium-weight tackle and fish deep during the middle of the day, where the salmon are. You will occasionally hook a salmon, so you need a setup adequate to land larger fish. Fish spinners or spoons in the deeper channels, adding splitshot as necessary. In the early morning or late evening when the sun is off the water, fish often move into the shallows. Remove your splitshot, and fish lighter offerings. Consider going with barbless hooks to minimize damage to fish you intend to release.