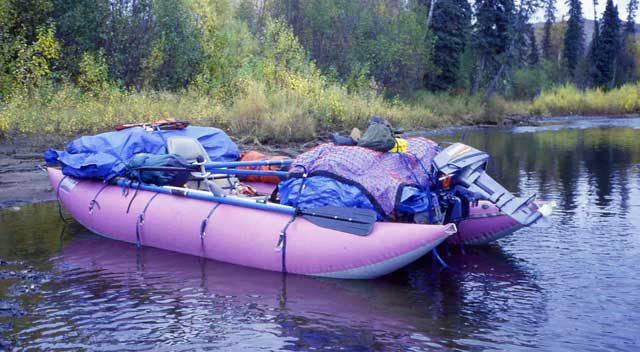 Designed primarily for single-person use, the small catarafts (boats 12' and under) are usually constructed of a single tube on each side, with a tube diameter of between 16" and 18". The original intended market for these boats was for fishermen needing a small rig for fishing small lakes and streams. But these boats are commonly seen on larger rivers in Alaska and are even used for multi-day expedition-type floats in remote locations.

In recent years, several twin-tube small cats have appeared in the market (by "twin tubes", we mean boats that use a pair of tubes on each, for a total of four tubes). These have greater lift, but are still too small for activities like float hunting, because of their reduced capacity.

Most of the commercially available cats are single-tube boats (one tube per side). These are the lightest of the conventional cats, and are ideal for situations where portaging may be a necessity. This is because each tube is relatively light and can be backpacked long distances if the occasion demands. For example, one tube from an 18' AIRE Leopard cataraft weighs about 53 pounds.

For float hunting or expedition trips involving large gear or personnel loads, there are a handful of boats on the market that offer superior lift in shallow water. All of them are twin-tube boats.

The Cougar is constructed of twin 18" tubes on each side. These are the smallest diameter tubes in the big cat market, and their low profile gives the boat great performance in heavy headwinds, which tend to push larger boats around on the water. The low tube diameter punches through headwinds with relative ease, while the fact that all four tubes are equal in size makes component replacement much simpler. 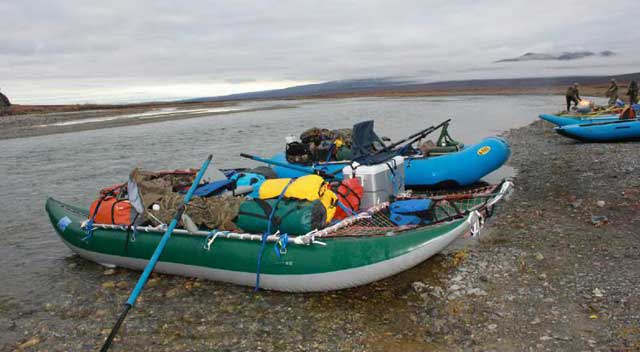 The Super Leopard, available only by special order, consists of a large outer tube and a smaller inner sponson. This gives the boat tremendous lift while offering the opportunity of creating a drop floor that sits inside the boat (as opposed to the Cougar, which creates a totally flat floor).

The AIRE Lion series boats are specifically designed for hauling large loads. The tubes are fatter than any of the other production boats AIRE makes, and the blunt bow transition puts more boat in the water, which generates more lift.

The Lion 18 carries the highest AIRE-rated load capacity of any of their boats, but it's also the heaviest of their cats. The blunt bow can be problematic with some outboard types, however they have been operated commercially with larger outboards successfully.

Catarafts versus Round Boats

Boaters asking whether a cataraft is superior to a round boat (or vice-versa) are usually asking the wrong question. The boats are designed for different things. An important saying to remember is to "let the river choose the boat". That is, consider the river you intend to float and the loads you plan to carry before committing to a particular style of inflatable. Some rivers lend themselves very well to smaller round boats, while others are ideal for large catarafts with outboards. Here are some considerations:

Catarafts take much longer to set up than do round boats, owing to the complexity of the frames typically used. This is not a factor to weekend floaters who trailer their catarafts, however it could be an issue for those who are hauling the parts in a car trunk or in the back of a pickup. Plan on an hour or two to set up a cataraft. Not such an issue on remote trips, where watches are put away and time starts to lose its meaning.

Although catarafts were first designed by whitewater boat jockeys for running the heavy foam, they've found a special niche in Alaska. With the proper rigging, they work very well with an outboard clamped to the transom.

Power cat rigging starts at the 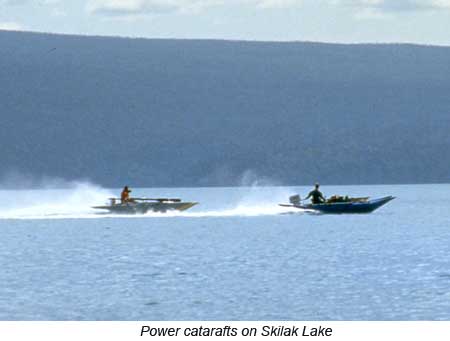 transom, with some decisions on what size outboard you want to run. For long float hunting or float fishing trips, you may not need anything above a 9.9-horse outboard since all you need is to double or triple your drift speed. With a setup like this it is unlikely that you will be able to push the boat upriver, but it could be an ideal choice. Portions of the Dishna River, the Goodnews River, the Noatak River and many others are ideal for this sort of thing. All you need to rig something like this is a light-weight adjustable transom, a place to set the fuel tank, and an extended tiller handle. It's also helpful to have a swivel seat for the operator. The Fish-On Seats by Tempress are ideal for this application, and pads can be purchased for them, offering a softer, insulated ride.

The mid-range of power cats falls in the 12-horse to 40-horse range, These are boats designed for the ocean or for running upstream on a river system. These boats require a "water shield" of some kind or the operator will be soaked by the converging wake between the tubes, which forms a rooster-tail about 1/3 of the way forward of the transom.