Alaska is home to a fish that will hit like a freight train, strip every inch of the line from your reel, and leave you completely battle-worn after three hours of hard fighting. No, it's not a halibut, it's a salmon shark! 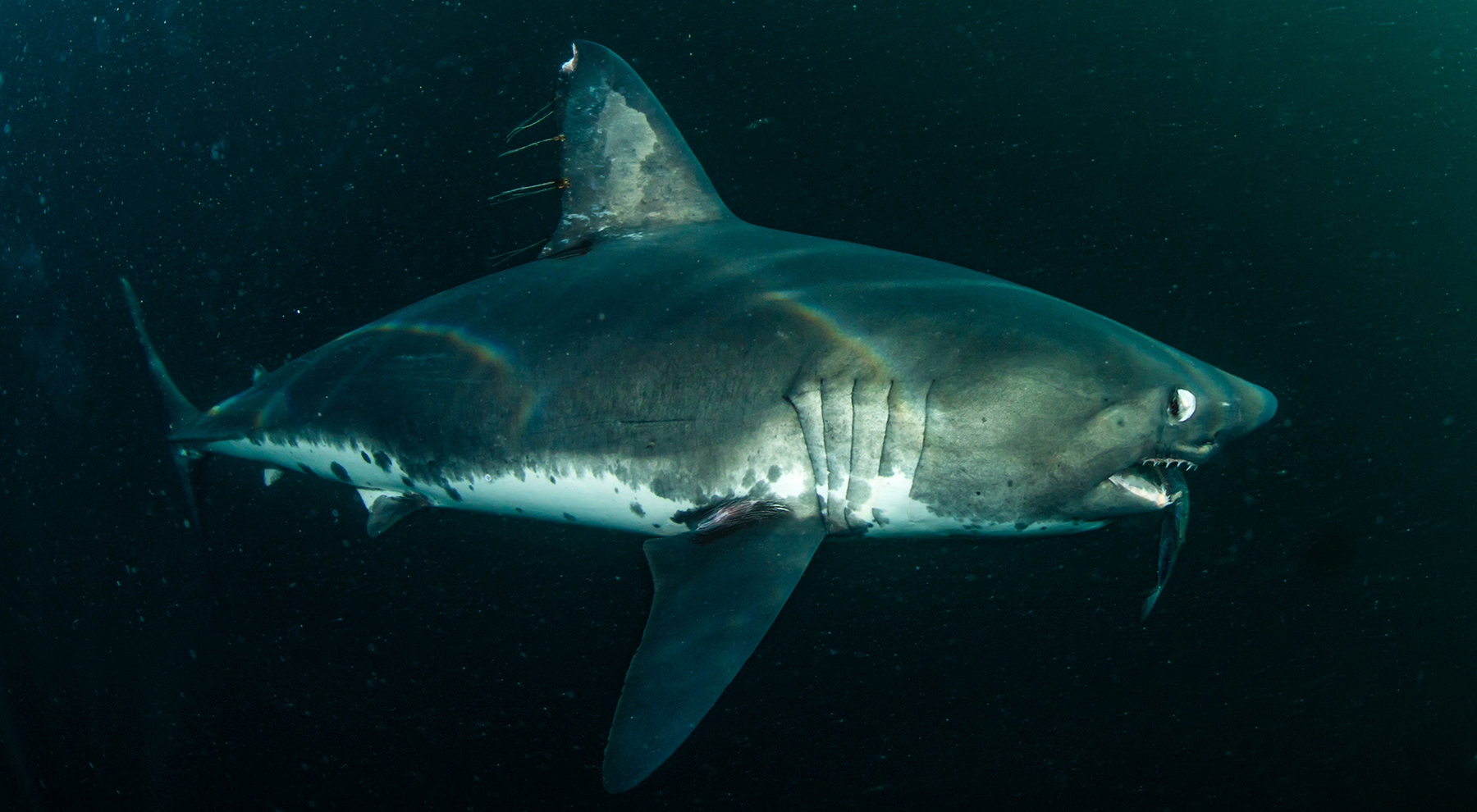 The salmon shark (lamna ditropis) is found in relative abundance throughout June through August, where they feed primarily on Alaska’s salmon species. Some salmon sharks remain in Prince William Sound and in the waters of Southeast Alaska year-round. Most sharks are not endothermic; that is to say, they can’t regulate their body temperature. Instead, they take on the same temperature as the water around them. But three species of shark are endothermic: the great white shark, the porbeagle, and the salmon shark. The salmon shark has the highest core temperature of any shark, with stomach temperatures remaining at a constant 78ºF, regardless of the water temperature. This heat is concentrated in the eyes, brain, muscles, and body cavity. That gives them the ability to accelerate and maneuver to catch prey quickly.

Salmon sharks average 6-8 feet in length but can reach sizes north of 10 feet and 600 pounds. Sport anglers have caught salmon sharks weighing over 800 pounds. Salmon shark lifespans are between 25-30 years. They’re aggressive predators and focus on salmon. Reports indicate that they may consume up to 25% of the entire salmon run in Prince William Sound. They also eat black cod, rockfish, pacific cod, and other fish species and have been seen taking seals and seabirds.

Salmon sharks appear to follow the food sources into Alaska waters during the summer months, preying on salmon, black cod, herring, pollock, pacific cod, squid, and others. They can be found singly, cruising just under the surface or in loose aggregations of 30 to 60 sharks hunting salmon together. There’s a story circulating about a feeding frenzy in Pony Cove out of Seward, which lasted three or four days.

Some speculate that there are over two million salmon sharks and that the population is stable; however, the State of Alaska has adopted conservative bag limits due to a lack of reliable population data.

The salmon shark is a close relative of the great white shark, which is found throughout Alaska from the panhandle north to the Aleutians.

The chief predators of salmon sharks in Alaska are great white sharks and orcas. If you see orcas, you won't find many salmon sharks around.

Salmon sharks are widely distributed throughout their range across the North Pacific Gyre, the North Polar Gyre, and the Alaska Current from the coast off of Japan to Prince William Sound and south throughout the waters of the Inside Passage and the Pacific Northwest. Their range extends as far south as Baja California and as far north as the Diomede Islands and the Bering Strait off the village of Wales. They actively feed wherever forage is found, from just outside the surf zone to deeper waters over 500 feet. 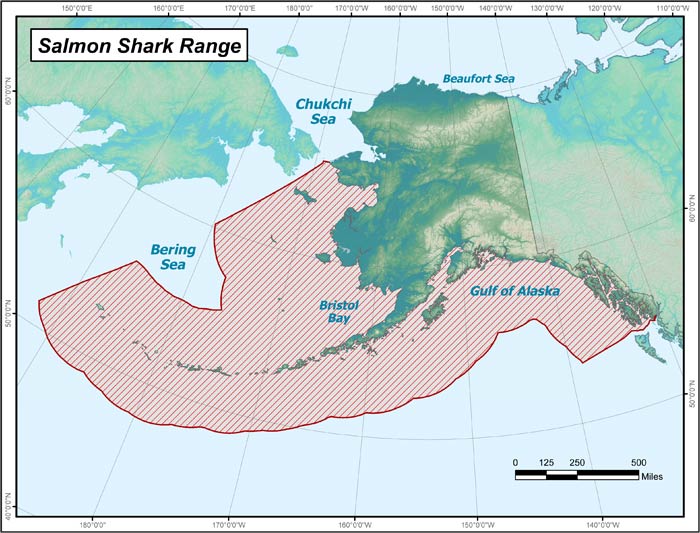 Salmon sharks are sometimes caught by anglers mooching for salmon or bottom fishing for halibut. But more exciting methods exist for targeting salmon sharks. Try cruising to look for feeding frenzies that sometimes occur, or look for solitary fish cruising just under the surface, evidenced by their exposed dorsal fins slicing through the water. Toss a rigged pink salmon some distance in front of the shark and reel it back in, using a jigging motion. The salmon may sink, so you can try rigging a balloon above the bait to keep it suspended. Or troll a whole pink salmon in front of moving sharks. Fast-trolling wire-rigged wahoo lures have generated some success. Fly-fishermen should use large baitfish patterns In the 9-12-inch size range for the best results. Consider using a 14—20 wt rod.

Because salmon sharks sometimes roll up in the line, leaders of six to eight feet are very helpful to prevent line abrasion. Rig the leader directly through the hook eye, and attach a barrel swivel to the other end.

About Chumming for Sharks

There's an ongoing debate about whether chumming works to keep sharks interested. While there is no question that chunks of bait tossed over the side will attract sharks, it doesn't always follow that a bucket of fish blood hanging off the stern is much help with salmon sharks. Some charter captains with lots of experience with salmon sharks assert that chumming is a waste of time. You be the judge.

A Word on Fighting Belts

Fighting belts are standard gear for saltwater big-game fishing. But with salmon sharks, a word of caution is in order. These are very powerful fish that can pull an unprepared angler overboard in a sudden rush. Some say the risks are too great and dispense with the idea altogether. Others maintain that a belt allows anglers to use much stronger leverage on the shark, which enables a quicker fight and a better chance of released sharks surviving. Protracted battles leave the shark depleted and it may die if it is released. If you opt for a fighting belt, go with a setup that matches the rod you'll use. Kidney-style wide belts that allow for low placement of the rod butt, while bracing the thighs, offer great leverage when battling larger salmon sharks.

In all cases, a mate should stand by behind the angler for safety reasons. Choose a belt with a toggle on the back, that allows a mate to grab the toggle if you are in danger of being pulled overboard. All anglers should have a safety knife to cut the line in an emergency and the belt should have a quick release. Another danger in fighting heavier sharks is if the line breaks or the fish comes unbuttoned when it's under a lot of pressure. The angler can slip and fall backward into a rod holder or other gear. The helper acts as a buffer to keep the angler from becoming injured. Finally, a safety line should be rigged from the reel to the boat. In an emergency, this puts the strain directly from the boat to the fish, and the angler can extract themselves from the harness much more easily. 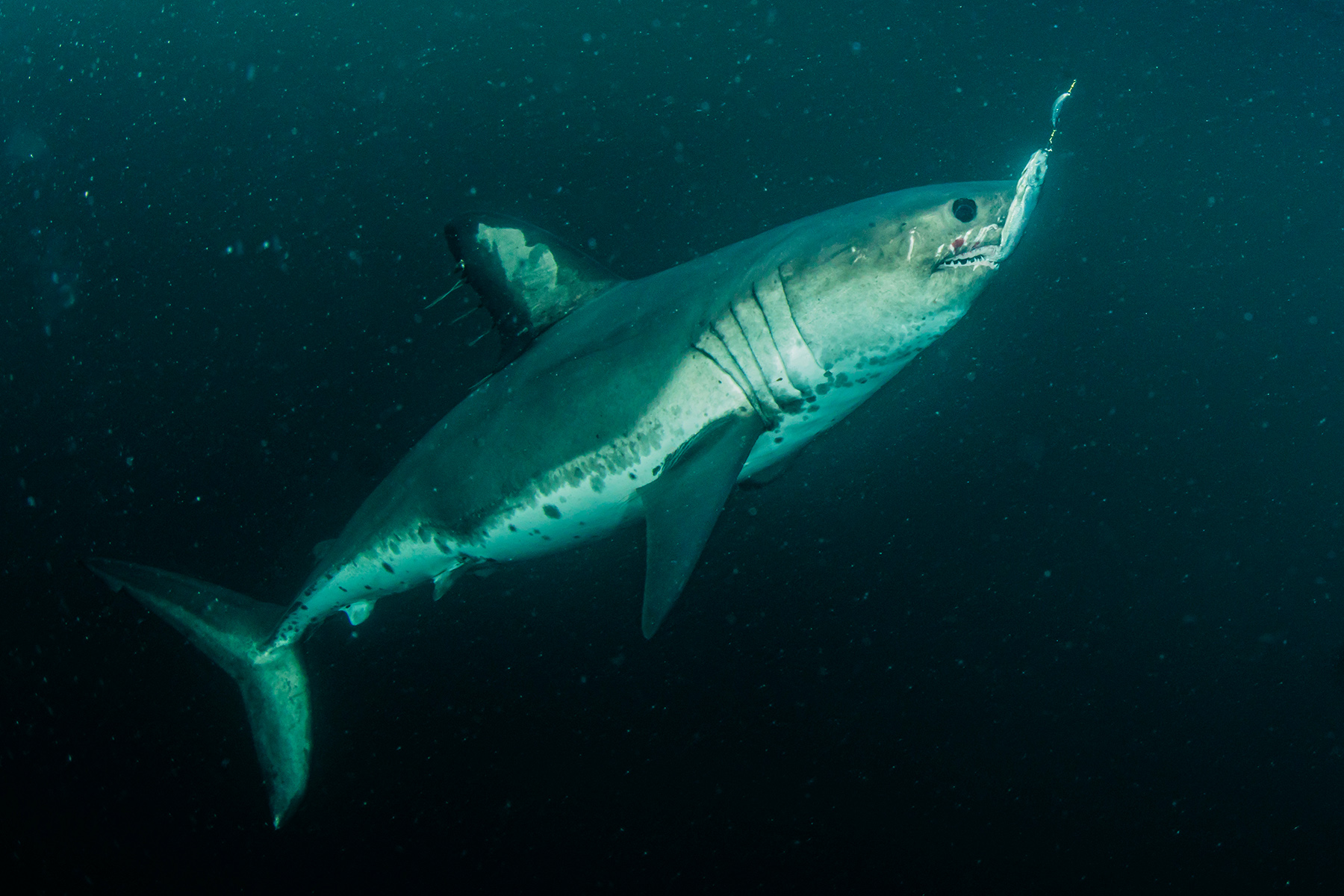 Shark meat has a high urea content and must be bled and processed quickly after harvesting. Some anglers soak shark steaks in milk for a few hours to extract or displace some internal fluids. Others disagree with the milk idea, saying that as long as the fish is bled out quickly and processed, you're fine. Prepare it as you would swordfish steaks, or by smoking or sauteeing. The meat is denser than other species.

Gearing Up For Salmon Sharks

The gear you need for salmon shark fishing is as unique as the fish themselves. You won't need anything this big anywhere else in Alaska; the salmon shark is in a league all its own.

It doesn't take a lot of gear to fish for salmon sharks, but it does need to be stout. This is the biggest fish you'll tackle in Alaska, and it pays to buy good, solid gear that can hold up to a beast of a fish. Most anglers encounter salmon sharks incidental to halibut or other fish, and in those cases, all you need to do is pick up a few things to add to your halibut box, or perhaps a small satchel case.