Alaska Transportation | Getting Around in Alaska

Accessing Alaska: What's the Best Way to Get Around?

Getting there is half the fun! Alaska is roughly twice the size of Texas, with a road system about the size of Hawaii's. That means that the vast majority of Alaska cannot be accessed by highway vehicle. Here are some common methods of getting around in Alaska, and what is involved with each. 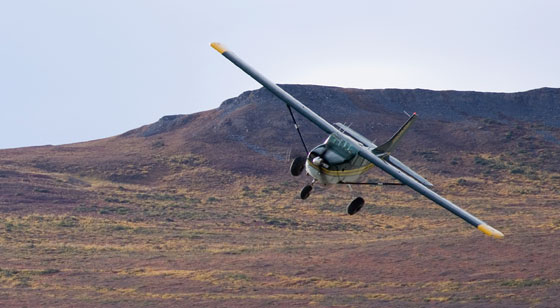 According to the Alaska Department of Transportation, Alaska has 15,718 miles of public roads. Many are paved, but significant stretches are not. If you're on the paved road system, most any vehicle designed for America's highways will work just fine between late spring and early fall (late April through early October). But in the winter and spring (October through late April), you need a front-wheel-drive vehicle with studded tires, or a four-wheel-drive vehicle. In most cases, regardless of the season, if you are traveling on dirt roads or off the road, you should choose a 4WD vehicle with all-season or mud and snow tires. 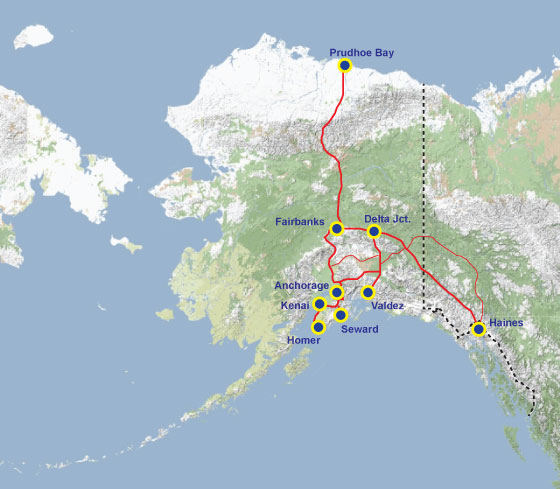 Keep in mind that in all cases, vehicles should be in good mechanical condition and tires should be in good shape. Here is a brief list of items that you should pack in your vehicle for all long road trips (most of these things can be packed in a plastic tote container):

Rail travel in Alaska, though limited, can offer several things to adventure travelers. First, it's a great way to see the country without the hassle of driving. Some rail cars and routes offer a dining car with meal service, a dome car for viewing the spectacular scenery, and more. Next, the railroad offers access to Anchorage, Seward, Whittier, Wasilla, Denali National Park and Fairbanks. Finally, depending on the route segment you take, the railroad offers "whistle stops" at any of several remote locations from which you can launch your adventure on foot or by inflatable boat. Simply load your gear in the rail car and off you go! Visit the Alaska Railroad's website for more details.

Alaska offers many ways to access the state by air, and if you need to get to a remote location, it's often the only option. Here's an overview:

Flights to and from Alaska originate in many cities in the Lower 48. By far the greatest number of flights to Alaska originate in Seattle, from which it is possible to catch a direct flight to Ketchikan, Juneau, Anchorage or Fairbanks. Once you're in Alaska you'll have no trouble finding flights to all of the towns and villages in the state. Some of these are served by daily scheduled jet or prop aircraft, and others are served more intermittently.

Air Charters and Transporters are available in all larger towns, and in many smaller villages as well. The Alaska Outdoors Supersite provides many resources to learn how to pack for your air charter trip, as well as the different types of aircraft available and their payload capacities. Check out our Alaska Bush Aircraft page for more details.

Do you need to book an air charter for your trip? Check our Directory for specific listings for each area of the state, including links and phone numbers of reliable air services.

Generally speaking, 4WD cars and trucks are not suitable for off-road travel in much of the state. This is because much of Alaska is covered by tundra or muskeg, a damp mat of vegetation that is often floating over a layer of frozen permafrost. A heavy vehicle will 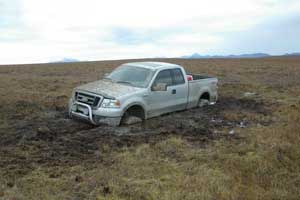 punch through this layer and quickly become bogged down, requiring several other vehicles to remove the stricken vehicle from the mud. One year, some hunters attempted to drive out on the tundra in the Dalton Highway area. Their two 4WD trucks became bogged down in the tundra to the point where the vehicles were bottomed out and could not be removed until the following winter, once the ground was frozen. At that point, the vehicles were tented and space heaters were used to thaw the soil around the tires, and the vehicles were winched out. The bill for this service ran into multiple tens of thousands of dollars.

In most cases, all-terrain vehicles (ATVs) or UTVs (4WD buggies with side-by-side seating) are much more suitable for driving off the roads in Alaska. They are used primarily during the summer (May-June through the fall (late September and early October), but in cases where the ground is frozen and there is little snow cover, they can be used during the winter as well. Care should be taken to prevent damage to the tundra during months when the ground is thawed. Stick to trails. Tundra is fragile, and because Alaska's growing season is so short, marks left by ATVs may be visible for many decades.

Snowmachines, also known in Alaska as snogos, snowmobiles, or sleds, are used in most of the state, with the exception of the area south of Cordova (Region 1). For more information on snowmachining in Alaska, check out our snowmachining page

Owing to the limited road system, one of the most common methods of getting around Alaska is by light aircraft. According to several sources, there is one airplane for every sixty people who live in Alaska.  Equipped with wheels, skis, or floats, Bush aircraft are capable of landing on lakes, rivers, riparian gravel bars, beaches, and even in small clearings. If you're planning a remote expedition anywhere in Alaska, chances are you are going to fly in to your destination. Smart travelers know the right questions to ask of their air service; when you book your trip, be sure to cover the following issues:

1. How much is it going to cost? Your Bush flight will be the single most expensive part of your trip, and air charters bill out in any of several ways. Get a firm price quote in writing.

2. Available dates? Hunters and fishermen want to be in the field at certain times, to help ensure their success. Nail down your dates with a firm quote. Some air services will not guarantee your dates until you make a deposit payment.

3. Available payload? For various reasons, summer fishermen and hikers pack lighter than fall hunters. Get a firm estimate, including the body weight of passengers, of the payload capacity of the aircraft you are flying in. It's vital that you avoid overpacking! If you go over, there's a good chance you will be asked to weed out items from your gear pile until you "make weight".

Check out our Bush Aircraft Page for descriptions of the common types of Bush aircraft used by charters, along with approximate payload capacities.

The road system in Alaska is very limited, however the state has over 365,000 miles of navigable rivers and is bordered by two oceans. Boats are a primary means of navigation across and around much of the state.

Common rigs used in Prince William Sound, and the Kodiak / Afognak archipelago include sailboats and powerboats.

Because many of Alaska's rivers are plagued by shallow water for at least part of their length, jetboats are very popular.

Inflatable "Zodiac-style" sportboats are popular for both saltwater and freshwater applications in Alaska. They provide great floatation, are safe, and they can be flown out to remote locations inside most Bush aircraft. They are not generally suitable for river systems where back-rowing is the preferred means of navigation, because the stern tends to push water during rowing. On the other hand, the transom allows for the use of larger outboards, which gives the operator the ability to travel long distances relatively quickly. In terms of safety, operators should be aware that traditional sportboat hull designs are very susceptible to capsizing in rough water when there are headwinds. The wind can pick the bow up and flip the boat very quickly. The remedies are to 1) avoid travel on windy days, 2) keep some weight forward so the bow stays on the water, and 3) travel slowly when navigating into the wind.

Conventional round boats (bailers and non-bailers) are the most common rigs used to navigate remote rivers in Alaska. The best setup by far is one that uses a frame and oars (this gives you much better control of the boat), however whitewater rafters may prefer a paddle setup instead.

Catarafts lend themselves to comfort, and they allow a convenient way to rig up an outboard for those longer, slow rivers where you need a faster push downstream.

Check out our Inflatable Boats section, for details on the use of inflatable boats for your Alaska trip, or just click on the boat type below: 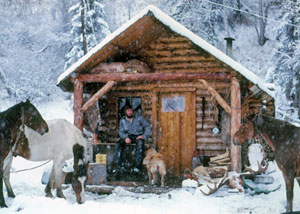 Several outfits in Alaska use pack animals to move equipment and guests into the back-country. A handful of remote guide operations offer this, mostly for hunters, and several exist on the road system. The animals used range from the traditional horses and mules, to llamas, goats, and even pack dogs. The latter two are much more mobile than horses and mules, and can access much rougher terrain, but at the expense of a reduced payload capacity.