Search for your favorite run with the tool above. Simply select the river, the year and the species, then do your search. It's easy!

How Alaska's Salmon Runs are Counted 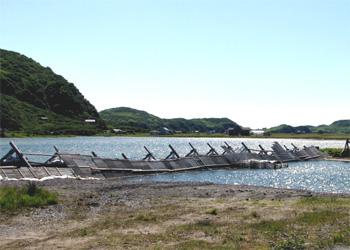 Alaska's salmon resource is of immense value to many people on both the commercial fishing side and in the sport fishing ecosystem. In order to maintain our stocks and to prevent over-harvest, it's important that we have a good idea of how many fish are in a given run. There are several systems that are used to figure that out.

An Offshore Test Fishery or "OTF" is used to detect the composition, strength, and timing of a run immediately prior to commercial fishing activity. This method involves a commercial fishing vessel working on contract for the Alaska Department of Fish and Game. Nets are let down on specific dates, in specific locations, and the results are tabulated. Based on the results, commercial, sport, and personal-use fishery dates and limits are set. OTFs are conducted in Cook Inlet, Bristol Bay, and in other locations around the state. 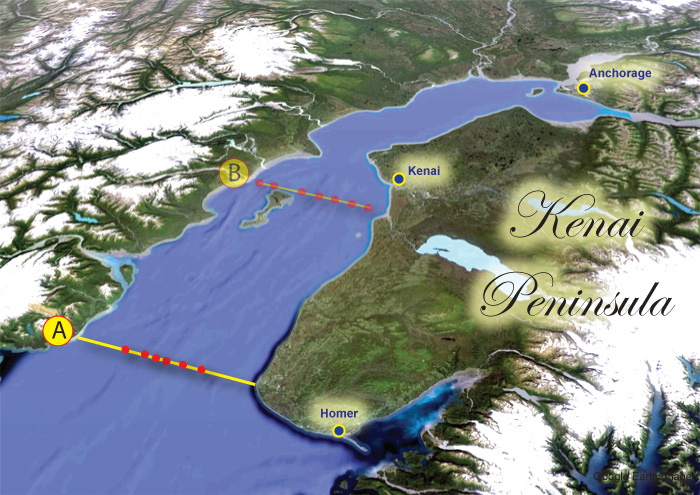 Fish collected in an OTF are not always bound for the rivers you might expect. For example, in the OTF used to sample Upper Cook Inlet coho, sockeye, and king salmon, the sample sites show no indication that Kenai River stocks orient to one side of the river or another. In fact, it appears that the stocks for all Cook Inlet rivers tend to mix freely, until just before they break off to move up their natal streams to spawn. For this reason, a sharp spike in OTF numbers cannot be relied on as a consistent indicator of when a particular run will hit a certain river. NOTE: on the map shown above, two test fisheries are indicated. The one shown at "A" is the currently active OTF being used. The one at location "B" was used for a time, to further determine the destination of salmon migrating up into upper Cook Inlet. Those sites are not currently being used.

Finally, the amount of time that elapses between a spike in the OTF and the arrival of fish in the river is highly variable, and cannot be relied on when you're scheduling your trip. Historic data for the last 30 years on Cook Inlet's Anchor Point OTF, show that fish that run through the OTF site between July 1-15 will take seven or more days to arrive at the Kenai River, whereas fish passing through between July 16-31 will arrive at the Kenai in as few as 4-5 days. When it's all said and done, there is a lot we don't know about where our salmon stocks go, how they mix with other stocks offshore, when they'll hit the river, and how many there will be. 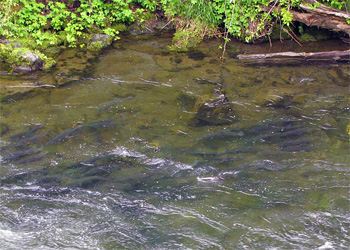 Because offshore salmon stocks from a given local river are often mixed with fish from other river systems along the coast of Alaska, and even with stocks headed to Canada and the Pacific Northwest, in-river assessments are used to determine the strength of a salmon run that has already entered a river. In-river sampling is the most reliable way of determining the strength of a run, and these data are used to establish fishing seasons and bag limits. There are several ways runs are counted in-river, as follows:

Sonar is used to count the number of fish passing a given point. Depending on the system used, sonar counts may or may not be accurate. For example, the sonar setup used in the lower Nushagak River was originally set up to count sockeye salmon, which typically move close to the shoreline as they swim upriver. Later, the same equipment was tasked with counting king salmon. But because kings migrate both along the banks, and out in deeper water, a significant number of fish are missed with this method. 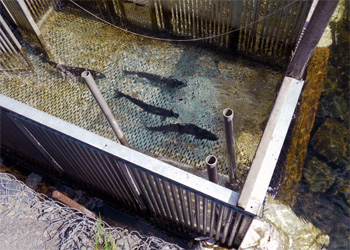 On some rivers, towers are set up for the purpose of manually counting salmon as they move upstream. Obviously, this is only possible on clear rivers, where fish can be plainly seen. The tower sits along the riverbank, and an agent sits in the tower, scanning the river visually for fish moving through. Fish are counted with a push-button counter and the data recorded.

Gill nets are sometimes used to sample salmon runs. Nets are placed across the river in strategic locations, for specified amounts of time, and the results tabulated to come up with an estimate on the strength of the run.

Weirs are used to funnel fish into counting stations, where they are manually tabulated, by species, as they pass through. Weirs present a few problems, however. They become clogged with floating vegetation and other debris, they prevent resident rainbow trout, char and other species from freely moving up and downriver, and they become an attraction for bears, as salmon stack up behind them. On the positive side, weirs provide a highly accurate method of counting fish and of differentiating between species, an issue not addressed by sonar counts. 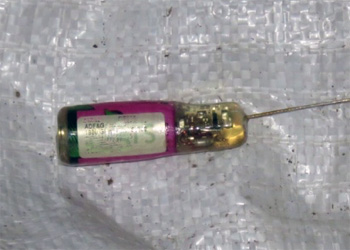 Salmon are sometimes captured and tagged in one section of a river, then an attempt is made to re-capture the same fish farther upstream in an effort to study the pace of the migration, along with in-river mortality because of angling pressure, predator activities, or disease. Sometimes studies are done using electronic tags, which are tracked in various ways. These studies may be done to determine where certain stocks end up, how long they take to move upriver, and causes of mortality. The tag shown in the photo is a radio tag that was used to measure salmon stocks in the upper Susitna River. The transmitter is inserted in the fish's mouth, down into the stomach, while the antenna protrudes out of the mouth.