Rainbow trout (Oncorhynchus mykiss) are probably the most common trout species taken anywhere in the world. They are used widely in stocking and enhancement projects in many areas and are a staple of fish hatcheries all over the United States. In Alaska, we take our wild rainbow trout very seriously. So seriously, in fact, that most Alaska anglers release them to fight another day. Rarely is a rainbow kept for food, as there are plenty of other species readily available without depleting rainbow stocks. Alaska's rainbows enjoy celebrity status almost statewide. 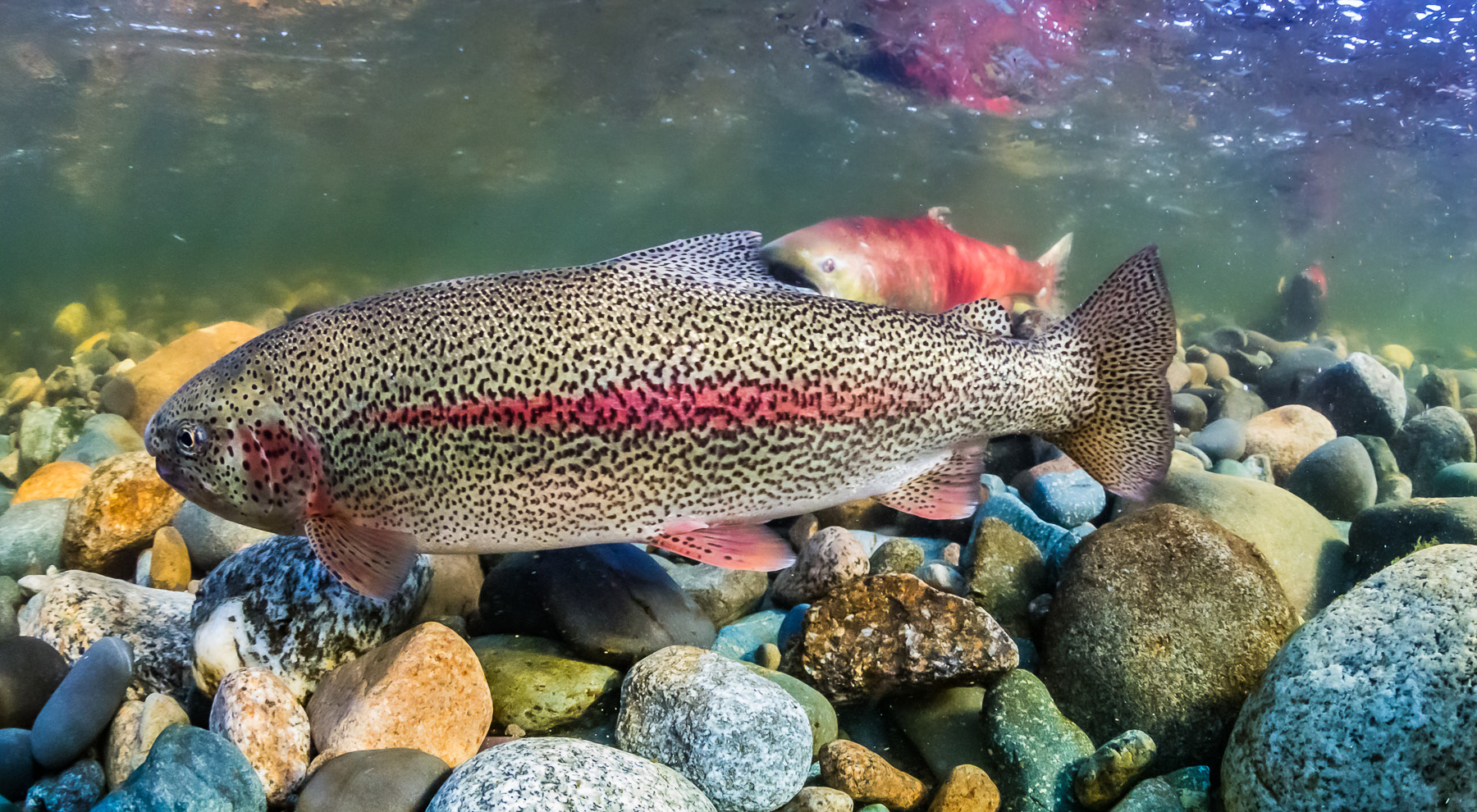 Pretty much anything you say about Alaska's rainbow trout is true somewhere in their range. They're arguably the most-stocked freshwater species and are planted in roadside streams and lakes from Southeast Alaska, to Southcentral, to the Kenai Peninsula and the Interior. Wild rainbow trout dominate Alaska's trout stocks, however, and they are found throughout Southeast Alaska, the Kenai Peninsula, the Alaska Peninsula, Southcentral Alaska, the Bristol Bay region, and parts of the Interior to the Canadian border. Catchable fish that are stocked from the hatcheries average between 10-14 inches in length (though some broodstock are released), and wild fish up to 30 inches are caught in some areas. Rainbow trout and steelhead are generally lumped together for management purposes, and steelhead can get quite a bit larger than rainbows. The current state record is a 42# behemoth taken on Bell Island in 1970. There are some very large rainbows around.

Rainbow trout experience wide variations in size and girth, depending on where and when they are taken, and their girth can fluctuate dramatically during the year. According to some sources, rainbows can experience a seasonal weight gain exceeding 20% over the course of the summer, on streams rich in salmon fry, eggs, and flesh from spawned-out salmon carcasses. Larger rainbows are sometimes spoken of as having "shoulders", a commentary in reference to the large girth in proportion to the head size during seasons of forage abundance. Fish can reach sizes in excess of 30 inches, to say nothing of steelhead, which can reach considerably larger sizes.

Rainbow trout are highly adaptable and are found in several variations in Alaska. Some fish live their entire lives in a particular river, whereas in some river systems, rainbows migrate to deeper lakes during the sockeye salmon run, where they may overwinter. Finally, some rainbows migrate out to saltwater, where they mature and migrate back to their natal streams to spawn. These fish are known as steelhead, and they are by far the largest rainbow trout in Alaska. The largest on record was a 42-pound behemoth taken near Bell Island, roughly 40 miles northeast of Ketchikan. Color patterns range from relatively plain fish with washed-out colors found in some larger river systems, to the gorgeous "leopard rainbows" of the Bristol Bay watershed.

Rainbows and steelhead spawn in the late winter and early spring, and they are particularly vulnerable to over-harvest at this time, due to exposure in shallow waters and their aggression during spawning. For this reason, in some popular watersheds such as the Kenai River, rainbow fishing is not allowed during the spring. Because steelhead typically return to their natal streams in the spring, this is one of the few times when anglers can target them in the river systems. Steelhead move in and out of the river systems and back to saltwater multiple times during their lifetime, and will spawn several times, in contrast to salmon, which spawn once and then die.

Rainbows are not generally finicky feeders and will take aquatic and terrestrial insects, salmon fry, salmon eggs, and the flesh from rotting salmon carcasses, whenever available.

Depending on the size of the fish you expect to encounter, fly rods for rainbow fishing can vary from ultralight to heavy. For rainbows under 3#, a 6-weight rod is ideal, but it's too small for larger fish encountered on the Kenai River or for the rivers in the Bristol Bay watershed. These fish are heavy and some of the rivers are large, with deep currents that will require rods in the 7-8 weight range. Choose reels with an adjustable drag system for handling heavier fish, and bring a sinking tip line, and a floating line. Weight-forward lines are great for the larger rivers in the Bristol Bay system and the Kenai River, where long casts are sometimes necessary.

Rainbows will take a variety of offerings, and anglers familiar with rainbow trout fishing elsewhere will be pleasantly surprised to find that many methods that work "back home" are also effective in Alaska. The exception concerns very large rainbows found in Alaska's rivers and lakes. Big rainbows don't get big by sipping midges off the surface; they are carnivores. They thrive in streams rich in the biomass of rotting flesh from dead salmon, salmon eggs, alevins, smolts, and fry, along with other species such as sculpins, leeches, and even mice that fall into the river from adjacent shoreline vegetation. Depending on the time of year, trout will be feeding on one or more of these, and anglers who can come up with imitations of these food sources will have the best chances of success.

Spin fishermen accustomed to rainbow fishing elsewhere will be familiar with basic spoons, spinners, and plugs that can catch rainbow trout, and to a large extent what works back home will also work in Alaska. Like many places, however, Alaska does have certain regional favorites that are very effective in taking rainbow trout. Spinning tackle is often used on rivers that contain both rainbow trout and northern pike, as both fish will take many of the same offerings.

Some of the best spoons for rainbow fishing include the Blue Fox Pixee, with pink, green, hot orange or pink inserts. Silver is the primary color but toss in some gold to round out the selection. Kastmasters are good, as are Fjord Spoons, Little Cleos and Mepp's Syclops in baitfish colors. Always bring along a small number of Daredevils in red and white, and five of diamonds patterns. Spoons should range in size from 1/8 oz. to 1 oz.

Popular spinners for Alaska's rainbows include the Mepp's Agila, Black Fury, and Comet series (dressed and plain), along with the Blue Fox Vibrax spinner. Go with silver, gold, and fire orange. Toss in a few red and chartreuse spinners for dark days.

Baitfish imitations such as the Rapala and Rebel, in their floating and sinking versions, are very effective. Try black/silver, along with rainbow trout and other small fish patterns. The Wiggle Wart, by Storm, is effective for big rainbows on larger river systems. The smaller Wee Wart is also popular. Try baitfish colors, along with fluorescent orange and red, chartreuse, metallic gold, metallic silver, and copper-clad. Plugs should be rigged with single barbless hooks to minimize damage to fish intended to be released. Larger rainbows are sometimes caught on these plugs while fishing for king salmon.

Dry flies such as the Mosquito, Black Gnat, and Elk Hair Caddis are excellent choices. Large floaters such as the Mouse are ideal on streams in western Alaska that host a population of shrews and voles. These are readily taken by larger rainbows patrolling shoreline runs with overhanging grass. Terrestrials such as Dave's Hopper are good as well.

Nymphs are the standby of the rainbow fishery, and no fly box would be complete without an assortment of Bead Head Nymphs, Gold-Ribbed Hare's Ear, Teeny Nymphs, and so on.

Streamers are a must, and your streamer box must have some Wooly Buggars in several colors, along with bunny Leeches in both straight and articulated versions. Leeches are used to represent both natural leeches and decaying salmon flesh. In the former case, choose leech colors in black, purple, and olive. In the latter case, use various shades of white, cream, tan, and pink. Each of those colors suggests salmon flesh in various stages of decomposition. Leech patterns are often tied with a couple of wraps of egg-colored chenille at the head, or with a sliding bead on the line to simulate a baitfish chasing a salmon egg.

Egg patterns are essential on salmon streams, and the most popular are the Glo-Bug, Iliamna Pinkie, Polar Shrimp, and Alaskan Omelette.

Bead fishing for rainbows has become very popular, and it's worth considering bringing an entire box of beads in various colors and sizes. They are fished either free-sliding above a single hook or pegged on the line with a toothpick fragment. At times, they are deadly.

On weedy rivers, or rivers with floating grass or other aquatic debris, a single split shot positioned three or four feet from the terminal end of your line will catch weeds that would otherwise influence the action of your lure.

Alaska's rainbow trout are the quintessential Alaska species of the Bristol Bay area, and anglers spend thousands of dollars to experience trophy rainbow fishing out of five-star lodges. But you don't have to break the bank to enjoy excellent rainbow fishing in much of Southcentral and Western Alaska. Visit our Alaska Fishing Forums for the best advice on gear for fly-fishing, spin fishing, or plug fishing for rainbows, along with the best timing and places, and get out there and experience it for yourself!

Alaska's rainbow trout are granted celebrity status, to the point where keeping one is considered bad form. The regulations allow you to retain wild rainbow trout, but bag limits are very restrictive. That there is a bag limit at all is a precaution to allow anglers to retain one or two that are too damaged or exhausted to survive after doing battle. Use barbless hooks, land your rainbows quickly and carefully, and release them to fight another day. Landing a fish quickly usually means using heavier gear than you might normally use for rainbows. If you want fish to eat, there are usually plenty of salmon and other species around.

Gearing Up For Rainbows

A basic kit for rainbows will also work for Dolly Varden, Arctic char, grayling, and cutthroat trout in most situations. Here are some basic guidelines.

Rainbows can be found throughout the water column, so you need both a floating line and a sink-tip line. Leader length can vary from seven to nine feet or so and should be anywhere from 4lb. to 8lb. (1x-5x or so.) Flies will be egg imitations, attractors, or streamers designed to look like baitfish. Insect patterns are also great, especially for fish under 20 inches. For larger fish, toss in a few mouse imitations. Big rainbows in the Bristol Bay area are sometimes suckers for a deer hair mouse tossed along a grassy bank. Streamer fly sizes should range from 2-6. Fishing rainbows with dry flies can be very effective, particularly in the early or late hours when fish will be feeding in shallow water or near cut banks. In that case, you should switch out to a floating line and a lighter tippet. Alaska has many species of stoneflies, mayflies, and caddis, so bring what you need to match the hatch.

Go with medium-weight tackle and fish deep during the middle of the day, and fish the tailouts or the head of pools and deep holes in the morning and evening when the sun is off the water. Fish spinners or spoons in the deeper channels, adding split shot as necessary. Go with barbless hooks to minimize damage to fish you intend to release.