Many hunters fantasize about hunting Alaska for moose, caribou or bear, but float hunting Alaska's wild rivers is the stuff dreams are made of. Drifting down a remote, wild river in Alaska is a thing that must be experienced first-hand to be appreciated.

Most hunters that are considering an Alaska hunting trip for the first time are immediately faced with a fork in the road: should they do a float hunt or a drop camp hunt? Let's look at each.

A drop camp is a hunt where you are "dropped" by an air service (in most cases) in a fixed location for the entire duration of your hunt. On the positive side of this, you get the opportunity to really acquaint yourself with the area and map out a strategy for hunting it. The down side is that you develop a larger scent pool the longer you are there.

Practically speaking a float hunt is a hunt where a boat (usually but  not always inflatable) is used to drift down a river for the purpose of locating and hunting game. Some float hunts involve the use of Zodiac-style sportboats with outboards or outboard-outfitted catarafts. In certain circumstances these boats can be used for upstream travel, but generally a float hunt is a drift trip. This means that you are traveling downstream, and once you leave a location you lose the ability to return without getting the airplane involved again.

Some float hunts can be conducted from Alaska's limited road system. Simply locate a river that crosses under a highway. Some Alaska rivers cross the highways system more than once, a fact that can work in your favor, however you should be prepared to encounter other hunters. These hunts are relatively cheap, and popular.

Finding a Place to Hunt

Determining where to hunt is one of the first steps in the planning process, and it requires an ability to interpret a variety of information to get a true understanding of what to expect in the field. Review our Hunt Planning Pages for specific details on both the general aspects of area selection and the specifics related to float hunts.

The gear for float hunting is as unique as the activity itself. And because of the remote nature of most floats, it's important that your equipment is reliable and rugged. Here are some things to consider:

Let the river choose the boat. Don't get hung up on trying to make a square peg fit a round hole. Manufacturer's hype, overnight Internet "experts" with little or no practical Alaska field experience, and persuasive salesmen can have you thinking that if you buy their product, you'll be set for any river in Alaska. It's not true. River conditions across the state are widely different from one region to another and even within the same vicinity. Different situations require different boats. 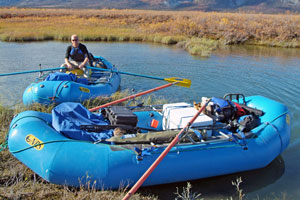 Round boats work on just about any river, and they probably represent the biggest chunk of the boats float hunters are actually using. They are especially suited for narrow, brushy streams because their profile allows them to slide around obstacles without hanging up, and their displacement allows them to float higher in the water than a comparable-sized cataraft. This is a huge plus in the fall, when water levels are typically at their lowest levels of the year. Floaters must decide between self-bailers and non-bailers; the bailers are nice because splashes, rainfall, and water that's tracked in from entering and exiting the boat simply drains out through the holes in the perimeter of the floor. Non bailers, on the other hand, have much greater displacement adn can therefore carry larger loads.

Read more on round boats on our Round Boats page; you'll find additional details that will help you determine if this boat is appropriate for the river you intend to float.

Some floaters prefer catarafts, and some rivers demand them. Catarafts are ideally suited for rivers where access points are few and far between. These rivers are often bypassed by float hunters who don't realize that an outboard-equipped cataraft can shorten a drift that would take days into a boat ride that is done in a few hours. If 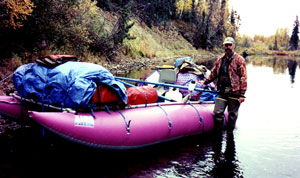 you rig your cataraft with a light transom and an outboard up to 9.9 horsepower or so, you can hunt these rivers that see few other floaters. Catarafts are great on rocky rivers, because the spacing of the tubes allow you to straddle rocks and other obstacles as you maneuver. The cataraft is also excellent on rivers with strong upstream headwinds, because the tubes are aerodynamic, allowing the wind to pass between them almost unimpeded. These are places where a conventional round boat, with it's high upturned bow, would be blown upstream. Catarafts are the ultimate self-bailer, with splashes or rainfall disappearing between the tubes. Finally, catarafts offer the comfort of allowing you to spread out your meat and gear, which aids in meat preservation and gives you more room in the boat. On the negative side, cats take twice as long to set up as a round boat, owing to the complexity of the frame (which weighs at least twice what a round boat frame weighs). Since you can't legally hunt the same day you fly in though, this might not be a limiting factor in your situation. The greatest limitation catarafts offer float hunters is their draft, when compared to round boats of the same length. A good working ratio to use when comparing load capacities between round boats and catarafts is "the rule of thirds"; a cataraft will carry about 2/3 the load of a round boat in the same size class. Looked at another way, a 14' round boat will carry about the same load as an 18' cataraft.

The major exception to the load issue involves the large-capacity cats that have become so popular with float hunters. Check out Catarafts Page for more details on these boats and others of interest for float hunting. 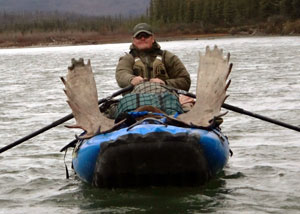 Inflatable canoes are very popular on some river systems in Alaska, and the word is out. More and more new boaters are investing in the skinny boat market, thinking that a long narrow boat will work on any waters. It's not true. While canoes are ideal for slow narrow rivers, their narrow footprint makes them easier to overturn when hazards are encountered, and they virtually shout for a rowing system if you're carrying heavy meat loads on moving water. See our Inflatable Canoes Page for more information on the pros and cons of this system.

Packrafts have been gaining popularity in Alaska. It started with sheep hunters looking for an easier way to pack meat, trophies and gear out of the field, and now moose, caribou and bear hunters are using them for all sorts of hunting situations. A pack raft can give you the ability to move meat fairly effortlessly out of areas that would otherwise require long portages by backpack. And some float hunters are using packrafts to access remote streams too shallow or narrow to accommodate traditional float hunting rigs. Refer to our Pack Rafts Page for a more detailed discussion.

Floating an Alaska river with a rifle or bow in your hands is not in itself a formula for success. If you don't have a solid plan, you're simply taking a boat ride. Here are some general principles of float hunting that will work anywhere in Alaska:

The shotgun approach of simply floating along expecting to take game that's standing on the riverbank is one of the most common mistakes float hunters make. Learn to see the river as a road, that takes you through areas of varying quality and game density. Like any road hunt, a successful river hunt requires the hunter to identify and map out the prime zones; those areas most likely to hold the desired species. Learning how to identify these areas in advance is a skill acquired through a thorough knowledge of the particular species, consultation with ADF&G biologists, air charter operators, and other hunters, and diligent examination of the available maps.

ADF&G biologists are a wealth of knowledge on their areas. One of your first calls should be to the biologist assigned to the area you are going to. Ask about density per square mile, bull / cow ratios, overall herd strength, predation issues, population trends, hunter success and hunting pressure in specific locations.

Air charter operators that work the area can be a wealth of knowledge, but don't expect them to serve the role of the ADF&G biologist; their job is to provide transportation. On the other hand, they know how their hunters are doing, and can be a great source of information in terms of where game is being taken. In some cases they can offer referrals to past clients, so you can contact them directly for more details. Understand that the primary job of a pilot is to fly the aircraft; they may not personally know a lot about what's going on on the ground in specific locations.

Other hunters are another great resource, and they have the added advantage of having actually been on the ground in the location you're looking at. Besides air charter referrals, the single best source of experienced Alaska float hunters is right on this site, in our Float Hunting Forum. Check it out! Avoid questions like, "Where's a good place to go moose hunting?", and stick to more detailed specifics like, "we're thinking of floating (the Arctic, the interior, etc) in the fall of ____. Does anyone care to compare notes with me via private message or email?" Hunters are reluctant to divulge their secret locations, but if they don't see you as a threat, they might shake a few details out for you if they know it's not going to be blabbed across the entire Internet.

Pick up a set of 1:63,360-series USGS topo maps for the entire area, from above the drop-off point to below the take-out. This covers you in the event you have to get dropped off or picked up in a different location if water levels are not cooperating. Leave the computer-generated maps at home, and use the full-sized paper maps; they have the detail you need and they cover the area away from the river where you are going to hunt.

It's not enough to just have the maps, you need to know how to identify likely hunting areas. Moose prefer braided areas with lots of vegetation, or oxbow sloughs and ponds. Find areas where the river comes close to high ground that overlooks good habitat. Climb the ridges, hills and cut banks, then glass down into the vegetation from these vantage points for the best results. Caribou often use nearby river drainages as migration corridors, so tune in to such places in order to forecast where they are likely to cross the river you're floating. Bears prefer confluence areas where salmon are likely to congregate. Identify such places on your maps before heading to the field.

One of the best ways to identify prime hunting zones along a river involves the use of color infrared (CIR) photos. These images show the vegetation type, vegetation coverage, openings, sloughs, ponds, cut banks (which provide the opportunity for glassing down into the vegetation), hills, access points and a lot more. Read more about the use of CIR images on our CIR Images page, and on our general Hunt Planning page.

Join registered hunting guide Michael Strahan on a short tour of the basic skills of river navigation on a fall float hunting trip for moose.

There are a number of print and DVD resources of use to float hunters. Here is a sampling from our store:

A Complete Guide to Float Hunting Alaska by Larry Bartlett

Field Care of Big Game / Is This Moose Legal? by ADF&G