Few things peg the adrenaline meter more solidly than saltwater salmon fishing in Alaska. The deep, cold, clean waters produce some of the strongest, largest salmon in the world. At no time in its life-cycle will a salmon be larger or stronger than it is on the open ocean where it has plenty to eat and room to run. A variety of methods are used to catch them, ranging from slow-drifting with bait, to trolling, to casting spinning gear and even fly-fishing. 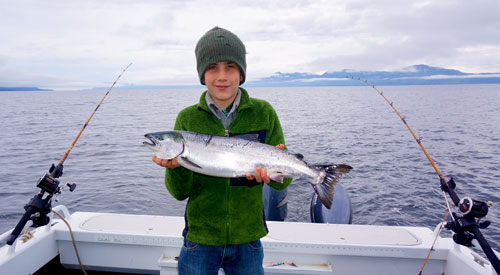 Of all the fish found in Alaska, salmon is by far the most popular.

Five species ply Alaska's waters (six, if you include steelhead), and they are found from Southeast up to the waters of the Arctic Ocean. Each of Alaska's salmon has two names, as follows:

Alaska's largest salmon, kings reach weights in excess of 100 pounds. The average size is somewhere between 25 and 40 pounds, depending on the time of year (they get fatter as they approach spawning time). Though the most popular times for catching kings are the months of May and June, they can be caught year-round, even in the dead of winter.

Silvers make their spawning run in late summer, and are most commonly caught during July and August, with some areas receiving fishable numbers as late as October.

One of the most desirable and abundant salmon in Alaska, reds are not normally caught in saltwater (unless by snagging, which is legal in many areas). This is because reds are plankton feeders. Reds make excellent table fare, and their dark red meat is very appealing. Saltwater anglers should focus on freshwater stream inlets, where fish stage prior to migration to spawning grounds.

Hard fighters, chums run with brute force and will test your tackle to the breaking point. They are found from Southeast Alaska to the Arctic and generally run for the freshwater during the early fall months. Saltwater anglers may encounter them at any time, however.

The staple of Alaska's commercial fishing fleet, pinks migrate in schools numbering in the thousands. In terms of table fare, they are at their best in the salt water, before they start their spawning run. Pre-spawning males develop a large hump on their backs, and the meat becomes soft and unpalatable. Pinks will strike a variety of lures and are perhaps the easiest of all salmon to catch.

Salmon fishing in Alaska is all about timing; kings can be caught during the winter months in some areas; mostly these are so-called "feeder kings", immature fish that inhabit certain areas of abundant forage. Different species spawn at different times, and you can catch them as they stage near the mouths of spawning streams. Of course they can also be caught as they travel in schools, feeding on herring, capelin, and other baitfish.

There are several techniques for salmon fishing from a boat; be geared up and prepared to change tactics as needed, depending on the area and what the fish are doing. Before we get into specific methods, you should have some basics covered regarding the boat itself.

Rigging the Boat for Salmon Fishing

First, although it's possible to catch salmon from just about any boat at some point, your success rate will climb exponentially if you use a good fish-finder. There are lots of brands on the market, and, as with many other types of outdoor gear, cost is often an indicator of quality. Many anglers prefer color view screens and even split screens that tell you where you are (GPS function) and what's going on beneath you (fish finder). Whatever you get, learn to use the equipment and you will certainly catch more fish. If you want specific brand recommendations, check in to our Saltwater Fishing Forum; we have a lot of charter boat captains in there, and many other very experienced saltwater boaters that can point you in the right direction.

Next, be sure your motor idles down low enough to allow trolling. Optimal speeds vary, but you need to be able to run down to 1mph at times (more on this in our trolling section). If your main motor cannot idle that low, you may need a kicker, or you could run a sea anchor off one or both sides of the boat. Sea anchors can be as simple as a five-gallon plastic pail dragged along, or a fabric sea anchor that's made for the purpose. Tie these off on a cleat forward of the fishing area, so they're not in your way. For boats running twin outboards, you could also run your trim tabs in the full down position and only run one motor; the drag of the other motor in the water, combined with the drag on your tabs could do the trick. Experiment until you find what works for your boat and motor combination.

Precise depth control is essential when you're trolling. You can accomplish that by using diving planers such as the Pink Lady or the Deep Six. Simply count out the number of "pulls" of line (grab the line at the reel and strip off an arm's length at a time for one "pull"). This crude method works in a pinch, but precise control is possible only with a down rigger. Generally you will run one down rigger on each side of the boat. Electric down riggers allow the fisherman to reel in the down rigger line with the push of a button, which means you can fight the fish instead of wasting time reeling up the down rigger line first (the down rigger must be reeled up after each strike, or you risk having the fish cut your line off on the cable.

Notes on trolling speed from our Saltwater Fishing Forum: "I regulate my trolling speed by watching the rod tips. The GPS may say more or less, but I'm looking for the rod tips to bounce about once per second. I speed up or slow down to get that when there are more or less currents. With no current that works out to about 2mph, but running into a strong current I may actually be back trolling in order to slow dow to that pace. Going with a current (not my fave), the GPS may be saying I'm doing 3.5 or 4mph by the time I get that 1 second bounce." - BrownBear

Trolling is, by far, the most popular way of fishing for any of Alaska's salmon species. The two fundamentals of trolling in Alaska are speed and depth. A good fish-finder will show you at what depth the fish are found, but you will have to play around with your trolling speed until you start hitting fish. Generally a trolling speed of 1-2 mph is about right.

If you're trolling four lines, and you have downriggers available on each side of the boat, run the downriggers at two different depths, say, 60 and 80 feet. It's not uncommon to catch king salmon while you're trolling for silvers, and the kings typically run deeper than silvers, so you want one line down at 80' or so. The other two lines run off the back of the boat. These are your "flat lines"; run one just below the surface and the other on a diver set to run between 30'-40'.

Be prepared to adjust your depth of your downrigger lines, and the reach of your flat lines. Some days you might need to run your flats in the third wave of your wake, and on other days the fish are right in your prop wash. Adjust your tactics until you start hitting fish. Fish sometimes run deeper on sunny days, especially if the water is very clear.

Jigging with a Crippled Herring jig can be particularly effective for silvers. Because fish may be found just about anywhere in the water column, a good strategy is to jig the lure all the way to the bottom, pulling it up three feet or so and letting it flutter as it drops toward bottom. Repeat this process until the lure hits bottom, and begin again as you bring it back to the surface. The lure flutters on the descent, and it's common for fish to hit it as it drops. For that reason, be ready to set the hook when you pull up as you jig the lure. Once you hook a fish with the lure, keep constant pressure on the fish; silvers are notorious for shaking loose right at the boat, using the weight of the lure combined with slack line, to throw the heavy lure free of their jaw.

Mooching can be done with whole herring, plug-cut herring or herring strips. Simply lower your line a few feet, and slowly jig the bait, letting out line until you feel the bottom. Slowly jig the bait all the way back up to the surface. If you're using whole herring or plug-cut herring, rig them so they spin as you sweep your rod tip up. This simulates the spinning action of a wounded baitfish, and attracts attention from greater distances. A great way to rig up for mooching is to tie your main line onto a banana weight, and a leader of about six feet or so to the bead chain side of the weight. This allows the bait to spin without twisting your line.

Shore-bound anglers are the commandos of salmon fishermen. Mobile and able to deploy quickly to local hotspots, they travel light, with minimalist gear for maximum effect. Here is an overview of the techniques and gear needed for shore-based salmon fishing in Alaska.

The two most common baits used for saltwater salmon fishing are herring and salmon roe. Herring works all the time, and roe seems to be most effective while fish are staging off river mouths before the spawning run. Both baits are fished under a float as a rule, however there are times when salmon will take a bait that's sitting on the bottom.

Spinning is by far the most popular method of shore-based salmon fishing in Alaska.

Snagging is legal in saltwater, and is a common method used by locals to procure a supply of salmon for the coming winter's food supply. Check the regulations for the area you are fishing to determine where, when and if snagging is allowed in the area you are fishing. Snagging requires a stout spinning or bait-casting rod, 20-25# line and sharp, weighted treble hooks in the 2/0-3/0 size range. Fish are snagged in different areas of the body, including the tail, which makes for a ferocious fight. Strong line is essential, as you don't want a fish to break your line, and swim away with a weighted treble hook imbedded in its flesh.