If you've ever caught a fish in deep water (water in excess of 100 feet), you have probably noticed the bulging eyes and protruding stomach of the fish as it arrives on the surface. This condition is generically known as barotrauma, and it is caused by the expansion of the fish's swim bladder ("float bladder" to some). The bladder expands as a result of the sudden reduction of pressure on the fish as it is reeled up from depth. To understand how this works, you need to know a simple principle of physics. 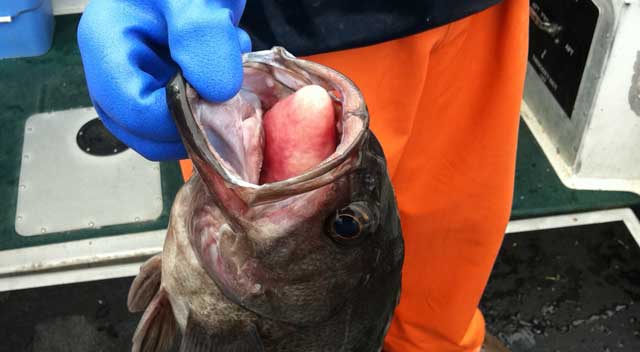 states that as pressure increases, volume decreases. The inverse is also true; as pressure decreases, volume increases (this is what happens to a fish that is reeled up from depth). Boyle's law can be illustrated by inflating a 12-inch balloon at sea level and submerging it to 33 feet, or two atmospheres of pressure (an atmosphere is the weight of one cubic inch of air, from sea level to the top of the earth's atmosphere. One atmosphere weighs 14.7 pounds.) Each 33 feet of ocean depth is equal to one atmosphere of pressure. Our balloon is experiencing one atmosphere of pressure at the surface, but that pressure doubles at 33 feet, triples at 66 feet, quadruples at 99 feet, and so forth. Therefore our balloon at 33 feet will be half the size it was at the surface, a third the size at 66 feet, and only 1/4 its size at 99 feet. Conversely, the balloon will grow in size as it ascends from depth. The greatest expansion takes place from 33 feet to the surface; the pressure doubles in that zone.

What Happens to the Fish? 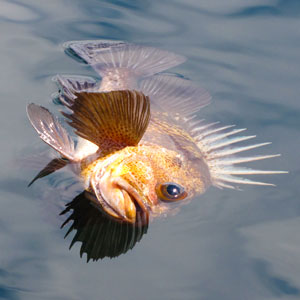 As a fish is brought to the surface, the swim bladder expands, most commonly pushing the stomach out through the fish's mouth, and sometimes causing the eyes to bulge out of the sockets and the abdomen to distend. It should be noted that this condition is not "the bends", as it is sometimes called. It is simply a form of barotrauma, caused by overexpansion of the swim bladder. If a fish is released in this condition, it may not be able to swim back to the bottom and will float away on the surface, eventually dying from exposure to the sun, having it's eyes pecked out by gulls, or being eaten by larger birds. The quillback rockfish on this page was unable to swim back to the bottom and was picked off by an eagle just after this photo was taken.

What to Do About It

To eliminate barotrauma in a fish, all you need to do is to return the fish to the same depth at which it was caught. Easier said that done. Simply releasing the fish won't work, because the fish cannot dive below the surface. What other options exist?

A common early method of treating barotrauma was to puncture the swim bladder with a needle (known as venting or fizzing). This releases the pressure and allows the fish to descend. But ample documentation exists to make a case that many of these fish die later, often as a result of infection at the needle penetration point. Another problem with venting is that some fishermen are not familiar enough with the anatomy of the fish to know exactly where the swim bladder is located. Some end up poking holes in other internal organs, including the stomach (often protruding from the fish's mouth), and the fish dies as a result. Most biologists agree that venting is a poor option. 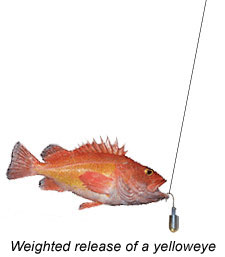 Another method is to bring the fish to depth by the use of a barbless hook and a weight. As the weight hits the bottom, the angler reels up quickly and the fish slips off the hook, and is free to swim away. But if care is not taken to insert the barbless hook correctly in the fish's mouth, the point of the hook can penetrate the protruding stomach and the fish will die. This can be prevented by inserting the point of the hook in the fish's lower jaw, from the inside of the mouth. When the fish is lowered, the hook point is safely protruding down below the lower jaw. When the fish arrives at depth, the swim bladder will have reduced in size so the stomach is once again in place inside the fish, and it cannot be damaged by the hook point.

Several release devices exist which grip the fish's jaw in a clamp. As the unit contacts the bottom, the clamp is released and the fish swims free. The main problem with this device is that the angler is required to return the fish all the way to the bottom for it to work. If the bottom is rocky there's a chance that the device could become hung up in the rocks and lost, and it is not possible to release fish in mid-depth where they may have been caught originally.

Shelton Fish Descender (SFD): Bill Shelton, of Shelton Products, has invented the "SFD", a metal pin that makes the release of rockfish much easier. The pin is shaped something like a clothespin. To enable quick release of rockfish, it's

recommended that you have a rod standing by rigged with the SFD alone, though it is possible to rig the SFD on your main line above your bait. This allows an angler to use the same rod to both catch and release rockfish. If you're rigging a separate rod with the SFD, simply attach the SFD to the end of the main line, and tie a short section of leader to the eye of the SFD that is nearest the point. Tie a halibut weight to the other end of the leader, and you're all set. To release a rockfish, all you do is insert the pointed end through the lip membrane of the fish, toss the fish and weight over the side, lower the fish to the appropriate depth and lift the rod tip. The fish slips off the pin and swims away.

The easiest weighted device to use is simply a heavy jig head with a barbless hook. Tie your line to the bend of the hook (instead of the jig eye), and hook the fish's lower jaw with the point. Quickly pull the fish to depth by free-spooling your reel. When the fish reaches the appropriate depth, pull up on the line and the fish should slide free and swim away. Note that fish caught in mid-depth should be returned to the same depth or reverse pressure could occur.