Called by some "the sailfish of the north", Alaska's grayling are the fish of pristine mountain lakes and slower rivers. For many anglers, they represent all that is wild about Alaska. Though they are indeed found in remote wildernesses, they also inhabit lakes near the heart of both Anchorage and Fairbanks. 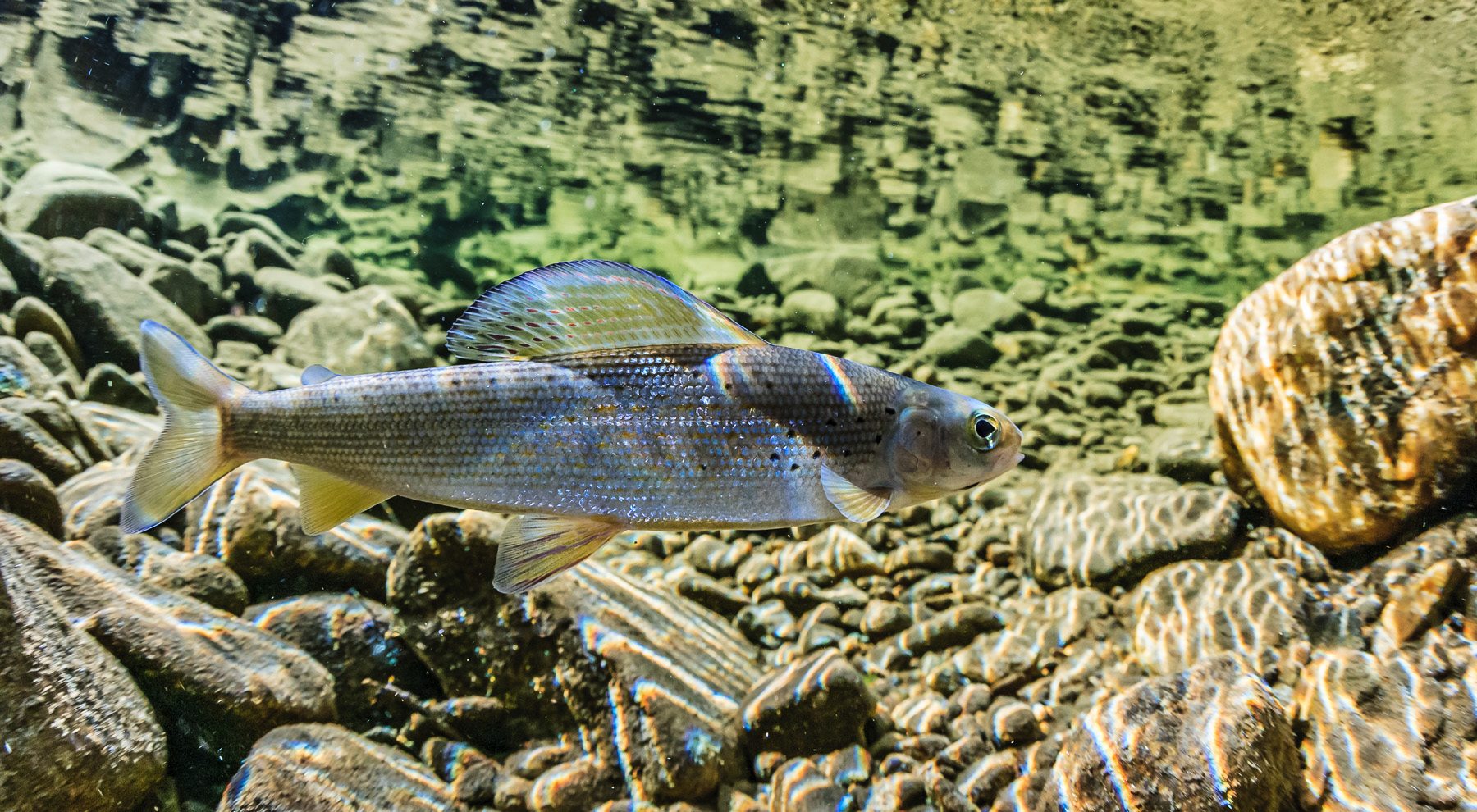 Mature grayling vary greatly in size, depending on the watershed in which they occur. The current state record tipped the scales at over five pounds and measured 23 inches in length. Grayling in the 20-inch class are relatively common, but a good average around the state is around 14 inches or so. There is a wide variety of colors present on some individuals, ranging from dark brown to gray and even some shades of iridescent green on the fins. They also have spots on their sides and in the dorsal fin, with the spot patterns being unique to individual fish. The mouth is small and squarish. Of course, the most prominent feature of grayling is the large dorsal fin, which is sometimes split in larger mature fish.

Grayling spawn in the spring, right about the time the ice goes out on Alaska's rivers and lakes. Grayling don't dig nests as salmon do, and after spawning takes place they move off to feed. Eggs generally hatch about three weeks post-spawn, and the fry quickly move to the shallows to avoid predators and to feed on small zooplankton and insect larvae.

In some systems, grayling move from rivers to lakes to spawn, and in other cases they spawn in the river and may spend their entire lives there. 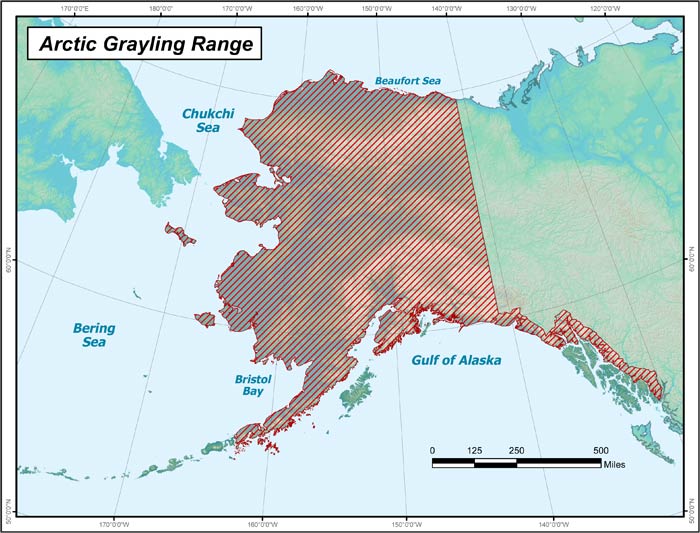 If there was ever a fish made for fly-fishing, it's the grayling. They simply love dry flies and nymphs, and there are places in Alaska where you can catch grayling until your arms practically fall off if you're fly-fishing. It's that good.

For fly-fishing for grayling, a 5-6wt, medium-action or light-action rod is ideal. Go a little heavier if you are fishing waters where larger rainbow trout or char are present. Fly fishermen should have both floating lines and sinking or sinking-tip lines, depending on water depth. Leaders should be in the 2-4x class and should vary in length from 5-8 feet or so.

No fly-fisherman heading out for grayling should leave home without an assortment of dry flies. Though grayling feed most commonly below the surface, there is almost always a time of day when dry flies are a perfect choice. Go with a variety of color hues in sizes ranging from #14-#10, with at least a half-dozen of each.

Grayling will take nearly any nymph pattern, but it's a good idea to bring a variety of sizes, colors, and imitations, from stoneflies to mayflies and caddis, along with scud patterns. Sizes should range from #18-#10 or so.

Grayling are often taken on larger patterns intended for salmon, char, or rainbow trout, therefore it is wise to toss in a few larger flies as well. Of course, you could gear down a bit and pick up some of these in smaller sizes as well. Bring an assortment ranging from #10-#6 and you should be covered.

Spin fishermen have a variety of options when it comes to grayling tackle. Spinners are excellent, as are small spoons and even plugs. Because grayling have soft, smaller mouths, treble hooks should be replaced by single barbless hooks if you are planning to release the fish. Trebles will needlessly damage the fish in ways that could take months to heal. If you want to use flies, but don't have a fly rod and reel, consider using a bubble float and a leader. The float gives you the weight you need for casting. If you're fishing very clear water, choose a clear float and a long leader in the 2x-4x size range. In turbid water, this is not as critical. Here are some spinning lures that have proven to be great producers for grayling.

Spinning rods should be in the "ultralight" category, designed for two to four-pound lines, and again, if you are fishing waters where you might encounter larger rainbows or char, bump it up to a light-weight rod with six-pound line. If you intend to release most of your fish, go a little heavier on your rods and line. You don't want to completely exhaust the fish before you release it. Lines from 2# test to about 6# are generally best, depending on the size of the fish expected, water clarity, and whether catch-and-release is the plan. Go with a heavier line to avoid exhausting fish you intend to release, or you could risk fatiguing them to the point that they will die even if they are strong enough to swim away.

Spinners should be between 1/8-1/4 oz. or smaller. Bring an assortment of dark and light colors, with a few bright patterns tossed in for good measure.

Spoons of various types are appropriate for grayling. Choose spoons in the 1/8 ounce range for the best results. Color choices should be gold or silver, with blue, red, or chartreuse highlights.

Plugs are problematic because their action often depends on the weight of the treble hooks they carry, yet grayling can really get torn up by treble hooks, especially if there are two. It's not uncommon for the trailing hook to end up in a fish's eye. Consider clipping off two of the points with wire cutters to minimize damage to the fish, or replace the trebles with single hooks. Colors may vary between natural minnow-type colors such as black/silver, trout patterns, and other patterns designed to simulate baitfish. Choose smaller sizes around 1/4 ounce or smaller, if possible. Round out your assortment with floaters, divers, and sinking models, as grayling may be found anywhere from the bottom to the surface, depending on conditions.

Jig fishing for grayling can be very productive at times. Bring an assortment of rubber-tailed jigs ranging in size from 1/8-1/4 ounce. Colors should be black, olive drab, and white. On occasion, brighter colors such as pink or chartreuse can be very effective as well.

Grayling are usually very easy to catch and will take a variety of offerings. For this reason, they're a great choice for new fishermen. That said, they can also give experienced anglers fits of confusion when they suddenly become uncooperative. In such cases, it's possible that the fish have ceased feeding altogether, or perhaps there is a hatch occurring. Check the surroundings carefully for emerging insects, and match the hatch!