Owing to the limited road system, one of the most common methods of getting around Alaska is by light aircraft. According to sources, there is one airplane for every sixty people who live in Alaska. For many people, that's not a bad deal considering the sheer exhilaration it is to fly over remote wilderness where there are no shopping malls, no roads and no signs of human habitation.

Equipped with wheels, skis, or floats, Bush aircraft are capable of landing on lakes, rivers, riparian gravel bars, beaches, and even in small clearings. In technical terms, those are known as "off-airport" landings, but in Alaska they are the norm. Here in the north country, the term "airstrip" is a loose appellation for a flat place where someone tossed the larger rocks off into the weeds.

This page features some typical Bush aircraft, together with the approximate load capacity for various configurations. Most can be rigged with either skis, wheels or floats, as well as special configurations and upgrades to enable Short Take-Off and Landing (STOL) capabilities. This list contains all the most popular aircraft; if you're chartering out, check with your air service to verify what equipment they're flying, and your anticipated payload availability.

Individual aircraft may be rated differently from other aircraft in a similar configuration. This is because of minor variations in weight from equipment on the aircraft, and various performance enhancements the air service may have added to the aircraft. In other words, not all 206's haul the same load.

Because aircraft are rated differently depending on how they're configured, you must always check with your pilot to verify how much weight the aircraft can carry. 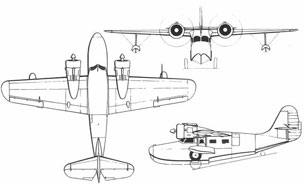 The Grumman Goose is the granddaddy of Bush aircraft. Originally built in 1936 as a high-end commuter aircraft, however it later saw service as a transport during WWII. It has since been modified in various ways, including upgrades to the twin, wing-mounted engines, installation of a radar system, modifications to the airframe itself, the addition of retractable wing floats (the original has fixed-position wing floats), and the installation of larger windows.

The Goose saw use for a number of years by Alaska Airlines, particularly in Southeast Alaska where the aircraft’s amphibious attributes lent itself well to landing in the bays and inlets of Juneau, Ketchikan and many other towns along the Inside Passage.

Grumman also constructed variants of the Goose, including the smaller Widgeon, the larger Mallard and the enormous Albatross with its 96-foot wingspan and 37,000 takeoff weight.

Though the Goose was flown commercially for many years in Alaska, few operators still operate them for paying passengers. A notable exception is Freshwater Adventures, out of Dillingham.

The Goose, with its cavernous interior and amphibious characteristics, is capable of hauling larger groups of float-fishermen out to remote lakes, where it can land on the water and taxi right up onto the beach. It can also land on an improved runway, making it a very versatile aircraft for the Alaska Bush. If you have a large group with lots of gear, the Goose might be able to get it done in one trip. 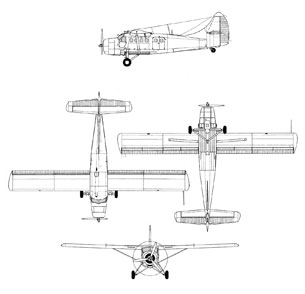 The DeHavilland DHC-3 Otter is another big load-hauler and it’s available in either single or twin-engine designs, depending on the operator. It was originally intended as a larger version of the Beaver, made by the same company (it was called the “King Beaver” initially). The DHC-3 Otter was first certified in 1952 and has been in service all over the north country ever since.

The DHC-3 Otter was originally fitted with a 600-horse Pratt & Whitney radial engine, however it is also available with a turboprop, which is substantially quieter in the cabin. The aircraft is also available as a twin-engine aircraft and has been used as a commercial airliner in that configuration for many years in Alaska.

The Otter is a relatively common aircraft in Alaska, and it can be set up with floats, wheels or skis, making it a very versatile aircraft for the Alaska Bush. 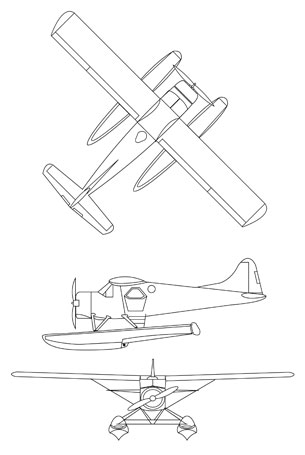 The Beaver is the quintessential Alaska Bush plane. Yes, a Canadian company built it, but it has truly found a home in Alaska. The throaty roar of it’s 450-horse Wasp Jr. radial engine and it’s unmistakable silhouette against a clear autumn sky are the essence of Bush Alaska. It’s the ultimate muscle car of the skies. Production started in 1946, motivated by Bush pilots that wanted STOL (short take off and landing) performance, raw power and large load capacities. The original design incorporated doors wide enough to accommodate an oil drum, and they’ve been seen hauling unimaginable loads all over northern Canada and Alaska.

Beavers have been used to haul plywood sheets and other building materials, ATVs, rafting gear and just about anything that could be of use in a remote Bush location anywhere in Alaska.

The Beaver, in its various configurations, can be found in Alaska from Southeast all the way to the Arctic. It’s one of the most common Bush aircraft in the state. It’s large load capacity and STOL capabilities make it an ideal choice for expedition travelers with larger groups and lots of gear. 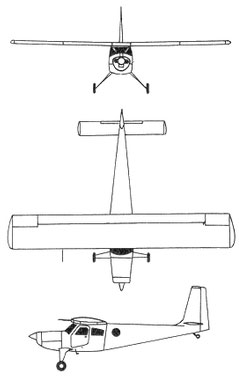 The Helio Courier has a storied history in Alaska and around the world. Used for covert operations in the Vietnam Conflict, and by missionaries in need of a STOL aircraft for remote strips, it's a top Bush performer that occupies a solid place in the Alaska flying scene. Some fans say the Helio is the ultimate Bush plane, offering long range, plenty of speed and enough capacity to rival the Cessna 206.

The Helio is a versatile taildragger that can be rigged with wheels, skis and floats. There have been numerous variations of the Helio Courier, including lengthened fuselages, turboprop configurations, tricycle landing gear and more.

The Helio Courier is used all over the Alaska Interior for Bush flying to remote gravel bars and off-airport strips, along with water landings on rivers and lakes. 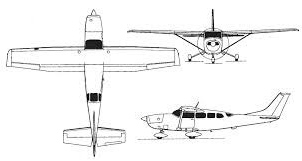 The Cessna 206 is the workhorse of the Alaska Bush. Equipped with tundra tires, the 206 can land anywhere from improved runways to riverside gravel bars. It was introduced in the early 1960s and is still in production. If the Beaver is a pickup truck, the 206 is an SUV; big enough to haul the load, but modern with plenty of eye appeal.

Though in most cases, the 206 is rigged for off-airport landings on wheels, they can also be set up for floats.

The 206 is commonly found across the state, mostly north of the Panhandle. It’s an ideal aircraft for two hunters or fishermen for float trips where lots of gear is needed. It is possible to haul a rafting party of two in one trip. 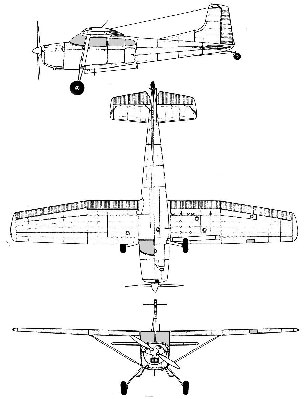 The Cessna 185 “Skywagon” is a medium-sized taildragger that offers great Bush performance and ready availability in Alaska. Operators with multiple aircraft in their fleet often have a 185 for trips where the space of a Beaver is not needed, but the load is too large for a Super Cub. It fits nicely between the two. A common practice with larger loads is to use the 185 to fly passengers and gear to a remote staging area, then shuttle into a smaller strip with a Maule or a Super Cub.

The Cessna 185 can be rigged with wheels, skis or floats, and all three configurations are common in Alaska. Naturally, a float-equipped 185 has reduced load capacity and burns more fuel, impacting what you can carry and how far you’ll go. Check with your operator to determine your limits.

The 185 is a relatively common Bush aircraft, and many multi-aircraft operators have one or two of them available. They’re an ideal “in-between” aircraft for situations where a Cub is too small and a Beaver or a 206 is too large. 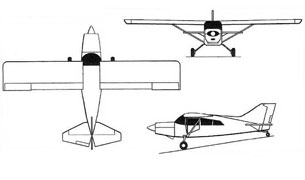 The Maule is the dark horse of Alaska’s high-performance STOL aircraft. Though not as common as the Super Cub, it hauls similar loads and can land on short unimproved strips. Performance-wise, the Super Cub is still king, but don’t underestimate the capabilities of a Maule in the hands of a skilled pilot.

Maules can be equipped with wheels, skis, or floats, but the usual configuration is wheels or skis; floats will dramatically reduce the capacity of the aircraft.

The Maule is relatively uncommon in Alaska, but there are commercial operators that use them exclusively, most notably smaller “one-man” operations that cater to niche markets. 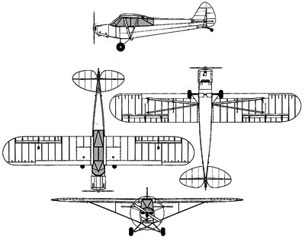 The Super Cub is the champion of high-performance STOL aircraft in Alaska. Often used to access short off-airport landing areas such as mountainsides, flat tundra benches and gravel bars, the Super Cub will get you and a light load of gear into some very remote locations. Where the Beaver is the 4x4 truck of Alaska Bush flying, the Super Cub is the dirt bike; light, responsive and very nimble.

Though Super Cubs can be fitted with wheels, skis or floats, the greatest variations you’ll see are in engine sizes. Of course this has a direct relationship to performance and fuel consumption, so ask your operator about the range of their particular aircraft.

The Super Cub is common from Southcentral Alaska all the way to the Arctic, and is most commonly used to shuttle outdoorsmen into small lakes or rivers, remote dirt strips and gravel bars along rivers. The aircraft really comes into its own in the mountains, though, and some pilots have perfected their ability to land a Cub on a glacier or on a sloping mountainside. If any airplane can get you there, it’s a Super Cub in the hands of a skilled pilot.