No other game animal in the United States captures the imagination of hunters like Dall sheep do. They live in some of the remotest locations in North America; places that demand the best from hunters in terms of physical conditioning, woodsmanship, and hunting savvy. And for hunters who pursue them, the price is more than worth it. They are the quintessential representation of everything that's wild. 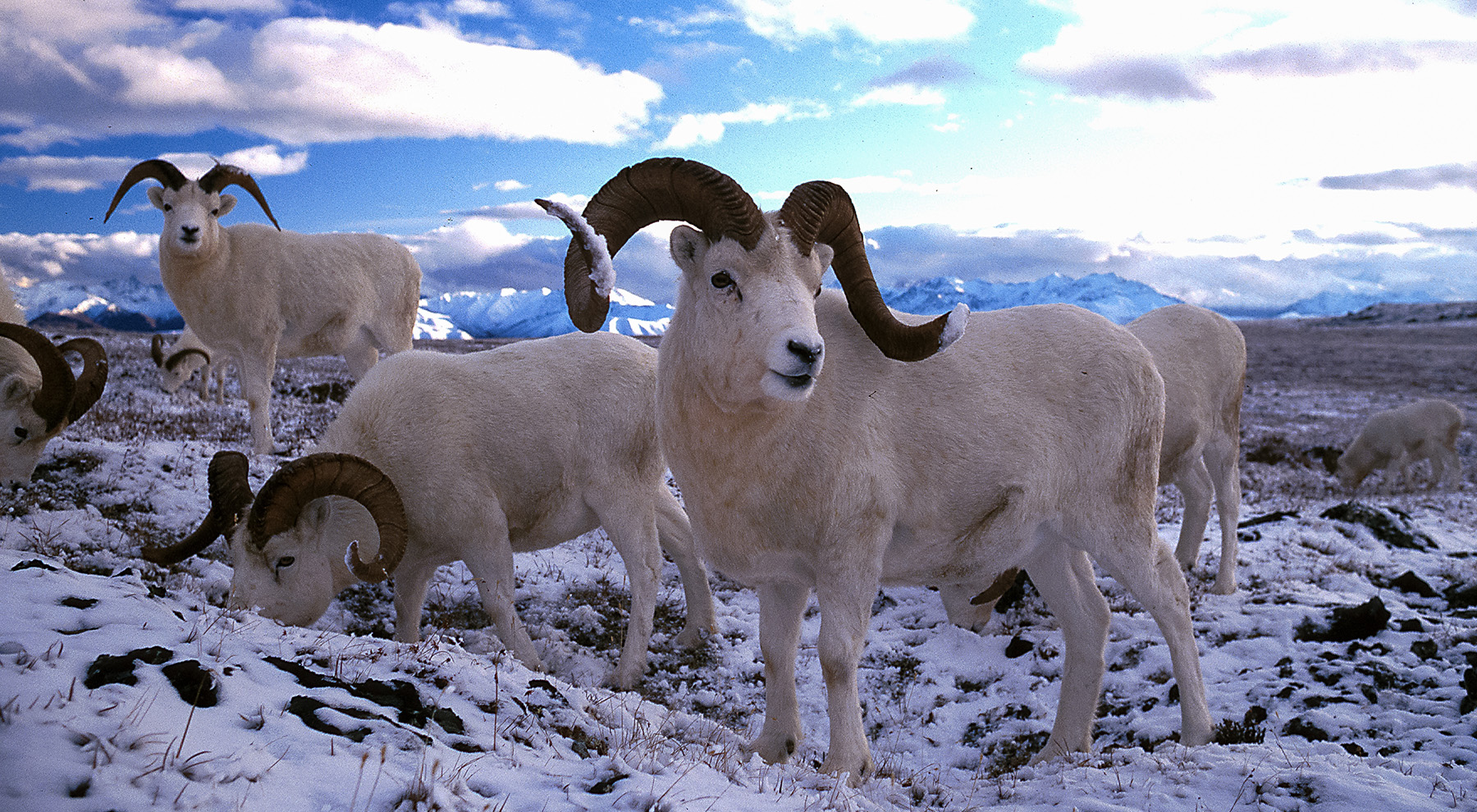 Dall sheep season typically starts on or about the 10th of August, and continues well into September. Each Game Management Unit has slight differences in both the starting and the ending dates of sheep season, but for the most part, the beginning part of the season is the tail end of summer, while the latter part is considered the beginning of fall.

Some areas are open only by special drawing permit, with the top trophy areas of the Tok Management Area (TMA) and the Delta Controlled Use Area (DCUA) being the two most popular among hunters in search of a large ram.

The Alaska hunting regulations require, in most areas, that a legal sheep must:

A recent study by the Alaska Department of Fish and Game indicated that there are more sheep hunters today than in the mid-1970s, and per-capita sheep hunter success is higher than it was then. Keep in mind that in the mid-1970s, most of the Wrangells were still open to sheep hunting and the statewide regulation said that a 3/4 curl ram was legal. Because most rams are difficult to accurately "age" in the field, recent studies have shown that at least 50% of the age-legal rams (rams eight years of age or older) are left on the mountain every year.

It is very important that sheep hunters do their homework before heading afield. Refer to our Hunt Planning pages for details.

Nonresident hunters must secure the services of a registered guide in order to hunt Dall sheep, unless you are hunting with a close relative within "the second degree of kindred." (defined HERE)  Refer to our Directory for a list of Dall sheep guides, and visit our Forums for recommendations. 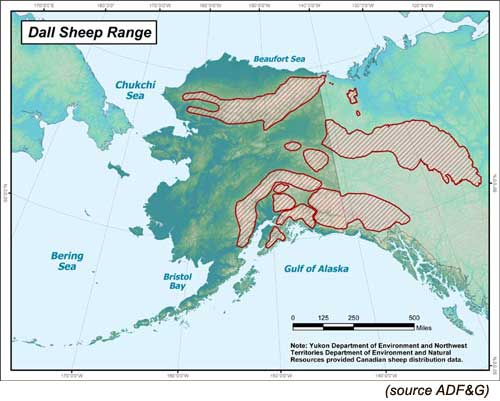 Alaska Dall sheep hunting will tax your strength, boggle your mind, and sometimes leave you guessing about your sanity. Some hunters might reasonably conclude that the ticket to success is working just a little harder than the average guy. They might be right if you're talking about moose, caribou, deer, or black bear, but it just doesn't hold with Dall sheep hunters. There's no such thing as an "average" sheep hunter; they're all a little crazy. Certainly, some perform extraordinary feats such as living out of a backpack for a month, while circumnavigating the entire Tazlina Glacier, looking for that one "magical ram", or hiking 40 miles on foot just to access and egress the hunting area, but stories like this are more common among sheep hunters than those in pursuit of other game. Be that as it may, they all employ similar tactics; what makes a master sheep hunter is often in knowing when to discard one method in favor of another. Here's an overview.

Glassing is the Dall sheep hunter's number one method for locating sheep. And you would think that spotting a white ram on a gray shale slide wouldn't be much of a challenge, but you would be wrong. To begin with, sheep change "color" with changing lighting conditions. Individual animals may present a lot more gray in their coats than others, often as a result of rubbing against shale mountainsides. In flat light, such as you get on an overcast day, these animals may be all but invisible, especially if they are tucked away in the shadowed side of the mountain. Plan on spending hours glassing; picking the terrain apart stone by stone in search of a head, a horn, or perhaps a white rump protruding from behind a rock. Never assume you can see all of the country from your glassing location; it's common to have 25% or more of the terrain concealed by folds and creases that cannot be discerned from one location. That's why sheep will sometimes suddenly appear where you had looked for hours and saw nothing.

In some areas, sheep can be patterned, in terms of their feeding/watering/resting schedule, particularly if the animals are not stressed or pressured by other hunters. Sheep often rise early in the day and head down to the valleys to feed and water. Some time in the mid-morning to noon time frame, they'll begin to ascend the slopes to their lofty perches above the valley floor, where will rest through mid-day until the early evening. Occasionally, they will get up and move around a bit, but they generally stay bedded until early evening, when they again descend to the valley floor to feed and water again. In some areas, these feeding and watering periods put the sheep at their most vulnerable, as a hunter's approach can be screened by the terrain.

In addition to the above items, do-it-yourself hunters will need the following:

Dall sheep hunting is one of the toughest activities in Alaska. Typical sheep habitat is no steeper than the places where goats are found, but sheep hunting frequently involves long traverses across rugged terrain just to access the hidden valleys and mountainsides where mature rams are found.

There are no Dall sheep in Region 1.

GMU 14C is known for producing good rams, with tags allocated on a very popular draw permit basis. The Kenai Peninsula hosts populations of Dall sheep in two general areas; the western edge of the Harding Icefield, and the Kenai Mountains north, east and west of Kenai Lake. There was a stocking effort on Kodiak Island between 1964-67, involving 15 animals from the Kenai Peninsula, which were released in the Uganik Bay area. For a few years they seemed to do well, but the last sightings were around 1970, and it appears that they all died out. There are no Dall sheep currently in the Kodiak / Afognak island group.

This area offers some of the best Dall sheep hunting in the state. Sheep are found throughout the Western and Central Alaska Range, and over into the mountains near Tok and Delta, home of Alaska's trophy Dall sheep draw hunts, the Tok Management Area, and the Delta Controlled-Use Area. The Central and Eastern Arctic also offer good sheep hunting opportunities. GMU 24 is managed specifically to offer a maximum hunting opportunity for sheep and attracts a fairly high amount of pressure as a result.

The Talkeetna Mountains hold huntable numbers of sheep, as do portions of GMU 14.

The Western Brooks Range has Dall sheep, which span the Divide into GMUs 26A and 23. There are no sheep in Units 22 and 18.

This site has plenty of resources for learning about Dall sheep and for planning your sheep hunt. Here's a list to get you started.