The canoe is the quintessential boat for traveling the remote north. What outdoors enthusiast has not imagined themselves slipping quietly along some remote lake casting for northern pike, or stalking a majestic bull moose while quietly paddling a canoe? Yet using a canoe in Alaska calls attention to some unique challenges that must be met. Hard-shell canoes are difficult to transport by air, so using them in remote locations is a challenging and expensive prospect. Inflatable canoes offer portability, but at the cost of performance. For someone looking to purchase a canoe for Alaska waters, the choices are not simple. 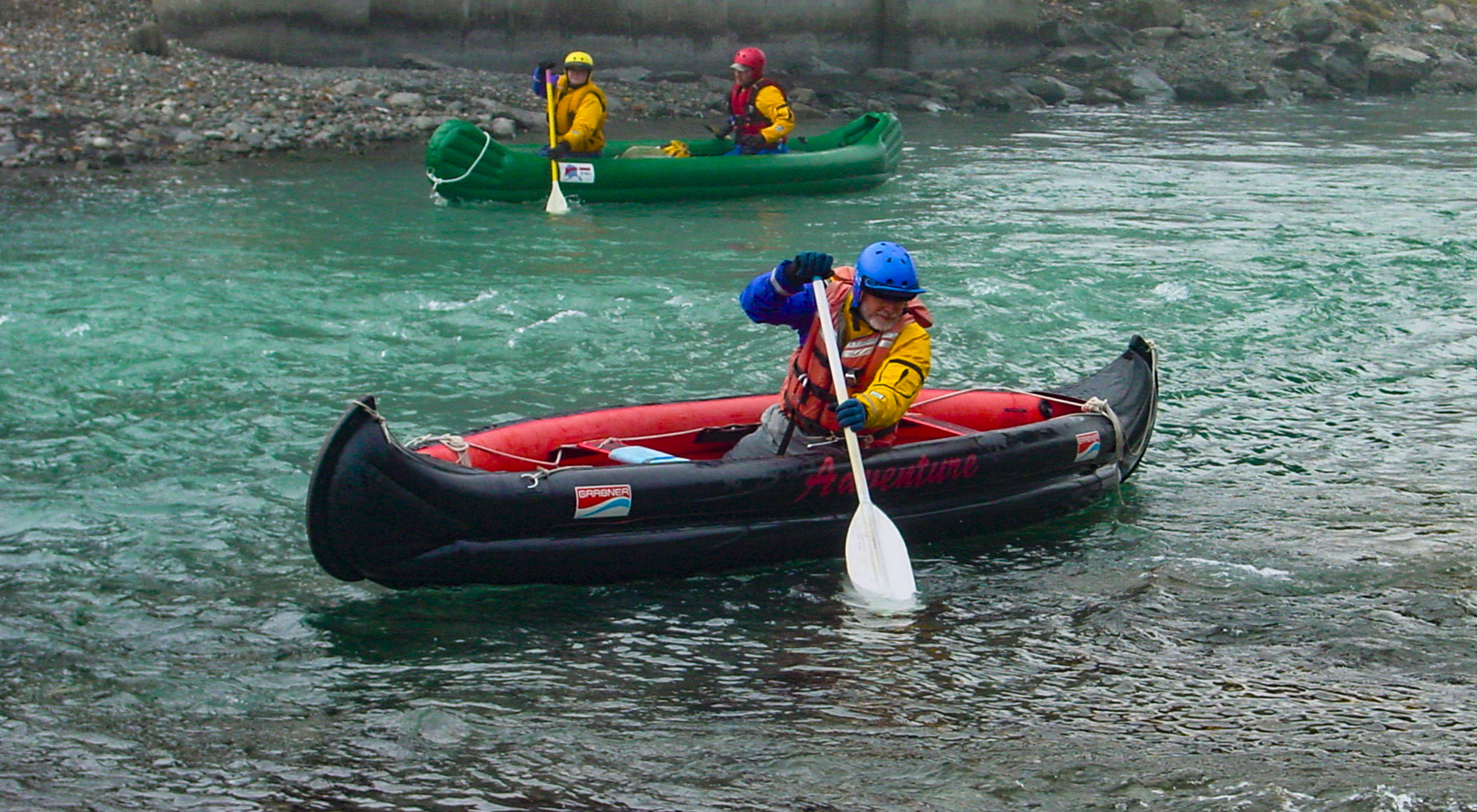 Today's canoeist has many options when it comes to inflatable canoes and kayaks. Variations in length, width, tube diameter, color and hull configuration are just a few of the options available.

Inflatable canoes are made with either rubber or plastic. Keep in mind that rubber flexes more easily than plastic, so a canoe made of rubber (CSM or neoprene) may actually fold in half (taco) on steep drops or in high waves. This is because the narrow configuration of the hull does not counter the innate flexibility of the material adequately. Plastic canoes (PVC or urethane) can flex under extreme conditions, however this is the exception rather than the rule. Most floaters prefer a stiffer boat over a flexible one, however there are features found in some rubber boats that cannot be found on any of the plastic boats on the market. A purchaser may figure that the flex issue is less important than other features they find. For more details on the performance differences between plastic and rubber, see our Introduction to Inflatable Boats page.

For purposes of discussion, let's begin our look at canoes by organizing them by size / carrying capacity.

Styles of Inflatable Canoes and Kayaks

Canoes and kayaks come in several hull configurations. These designs must be considered in light of the type of water a person intends to float and the loads that will be hauled. 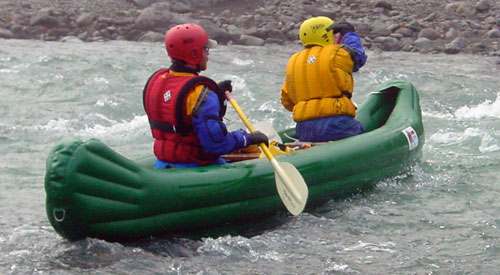 In most cases the traditional upswept, pointed bow and stern have been abandoned by manufacturers, because it is hard to replicate in an inflatable boat without compromising interior space. Currently there are a handful of traditional designs on the market that have managed to make it work, most notably those offered by Grabner. Their "Adventure" series uses a relatively flat upswept bow that is edged in front by what Grabner calls a "Bow Reinforcement Strake"; a piece of hard curved plastic that provides excellent abrasion protection for the seam. This design was originated by Metzler, but was sold to Grabner when Metzler went out of business. Another Metzler design incorporates an inflatable bow and stern that gets its flat upswept profile from I-beams that attach the hull fabric to the other side of each tube. This design has been replicated by Jim King's Alaska Series in their "14.3 Explorer" and "Tripper 17" boats, and remains popular with canoeists who favor a traditional design. Pristine Ventures out of Fairbanks has designed the Pioneer X-Stream, which incorporates a drop-stitched floor, offering good tracking. The floor fits into a pocket and it can be removed for portaging if necessary. This boat is made with 32 oz. PVC. They also produce the Legend, a 13' boat made of the same materials. 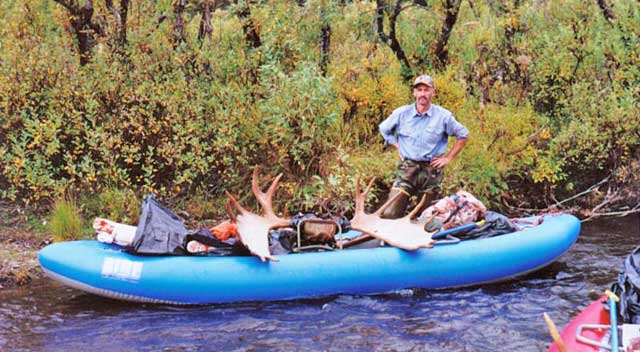 Several companies make canoes with pointed bows and a flat tube profile (no significantly upswept bow). Because the bow is relatively flat, care must be taken in these boats to avoid splash-over in rough water. Incept's canoes come in various lengths that incorporate this design, as do others such as the AIRE Traveler.

This picture shows Alaska float hunter Tracey Harmon with a heavy-laden AIRE Traveler. The Traveler is made of PVC, which lends itself well to dragging through shallow water. The material is so slick that some hunters use the boat as a toboggan, dragging meat and gear over the tundra on long portages.

The Traveler is also made in another configuration, which incorporates a transom attached to the back, for the purpose of running a small outboard. This boat is the Power Traveler, and it could be the ideal choice for anyone floating long, slow rivers where downstream speed is important. 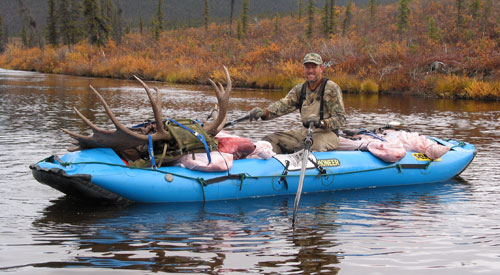 A "sled" canoe is a design that opens the bow and stern sections, creating two parallel tubes that are tapered at each end. Connecting the tubes is a ribbed I-beam inflatable floor, and a fabric piece that forms a deck in both the bow and the stern. From a performance standpoint, sleds tend to plow rather than part the water like a traditional hull. This becomes accentuated with heavy loads, and increases the boat's resistance to rowing and paddling.

The sled design was originated by Metzler and later sold to Grabner, who continues to produce it as the "XR Trekking". This design was duplicated and enhanced by SOAR Inflatables as their "S-16", but the S16 is 16 feet long, compared to the Grabner's 13-foot length. The S16 also sports a larger tube diameter, by three inches. It is interesting to note that the Grabner boat weighs in at a spry 44 lbs., whereas the S-16 tips the scales at 78 lbs. The S-16 was later "super-sized" into the Pro Pioneer, a concept pioneered by Pristine Ventures of Fairbanks, Alaska, whose primary motivation was to develop a slim canoe that could be flown out via aircraft for floating narrow, shallow streams. The Pro Pioneer is similar to the S-16 design, but the tubes are larger and they are both wider and longer. The Pro Pioneer includes enhancements like additional grab handles on the hull and other features float hunters need. On the downside, SOAR canoes are made with a neoprene bottom. This fabric is highly abrasion resistant, however it tends to grip the riverbed when dragging through shallow areas.

*NOTE: Load capacities posted in this chart are as quoted by the respective companies and do not necessarily reflect actual capacities in field conditions.

Many canoeists prefer to paddle their boat, rather than rowing. This is not difficult with hard-shell boats, the thin hull allowing easy access to the water with the standard paddle length. But the tubes on an inflatable canoe creates a distance between the paddler and the water that requires longer paddles. Figure the correct paddle length by resting the blade on the floor. For rigid canoes, the handle should come to just under your chin. For inflatables, it should come to the top of your head.

It's important to master basic paddling strokes before testing yourself on a remote, isolated river system. 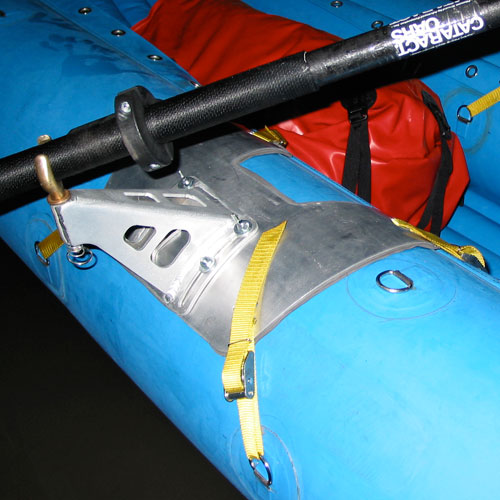 Whereas hard-shell canoes are designed for paddling, inflatables accomodate rowing setups as well. Several designs exist, but the basic concept is the same with all of them; to provide a solid platform to which oars can be secured. Remember that a rowing setup must provide the following elements in order to offer a firmly-anchored rowing station:

Most canoe rowing setups fail to deliver these three elements, so oarsmen must look to alternative rigging. Most canoes come with seats that can be repositioned in the boat. Ensure that the seat is properly placed for your reach. In most cases a difference of 19 inches between the seat and the oar stands is about right. Use a rope or a strap, laced from one side of the boat to the other, for a foot brace. Alternatively you could brace your feet on gear, however the gear should be secured into the boat with straps to prevent it from moving when you are pulling hard on the oars. 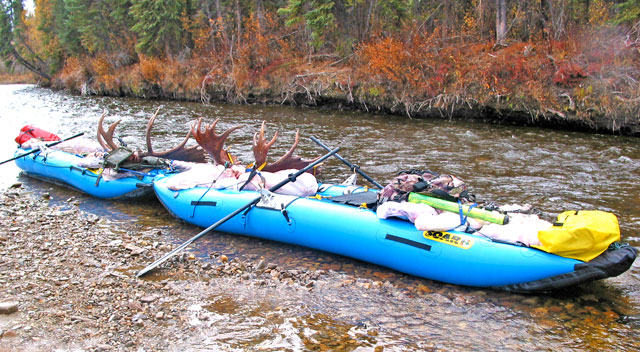