Few sounds evoke the image of truly wild places like the sound of a wolf pack hunting in the distance. The clear, quavering howl heard in the stillness of a crisp fall morning brings on a chill that has nothing to do with the temperature. The untamed wilderness is alive; breathing, slipping silently through the riparian willows. Stalking, killing, and eating. The wilderness is an apex predator that cares nothing for your thoughts about it, or your hopes and dreams. It is hungry. 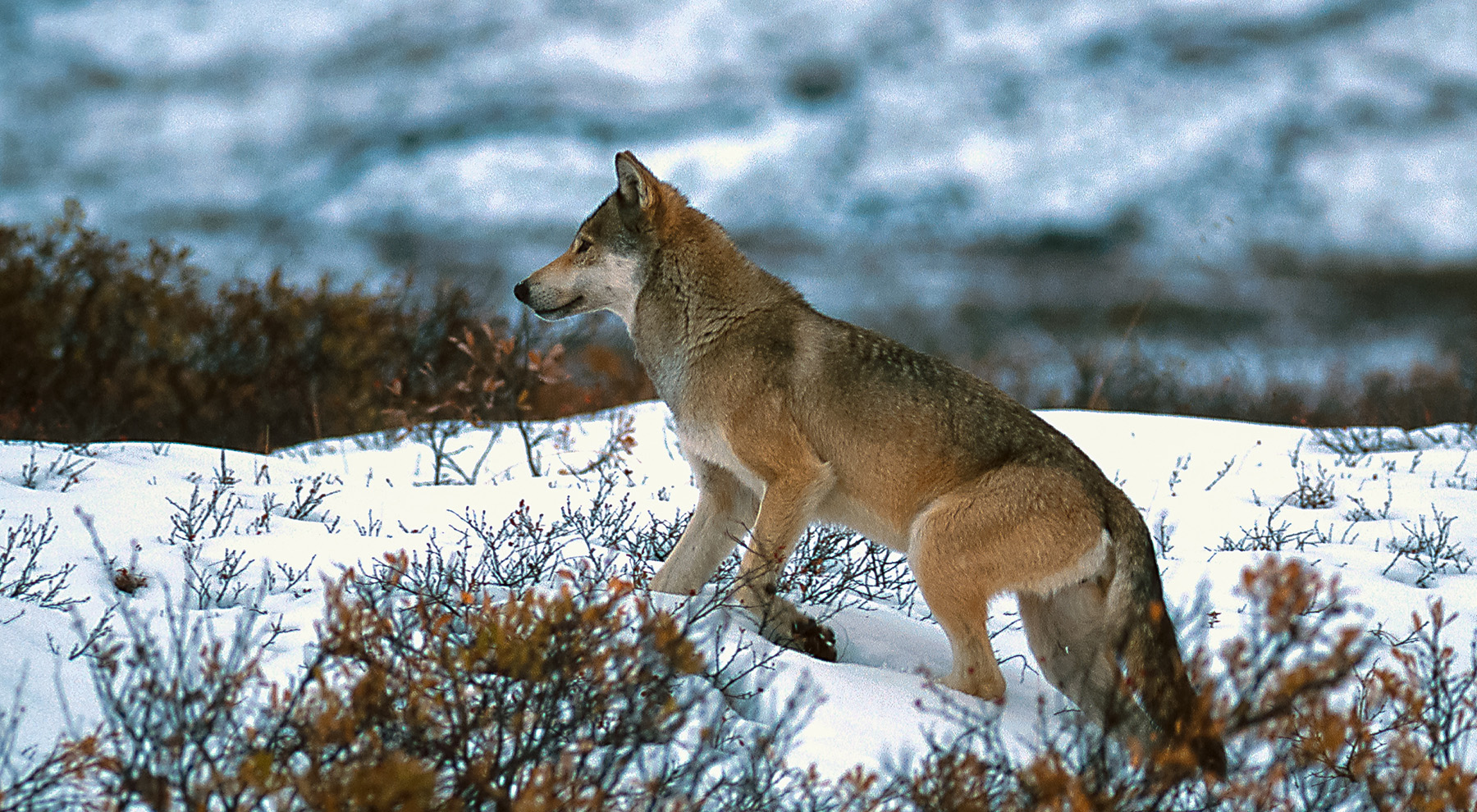 Alaska is home to one species of wolf, canis lupis, which is divided into two subspecies. The first, the wolves of Southeast Alaska, are referred to as the Alexander Archipelago wolf (canis lupis ligoni). Weighing between 30 and 50 pounds, they are smaller than wolves found elsewhere in Alaska. They are found throughout Southeast Alaska on all but the ABC Islands (Alexander, Baranof, and Chicagof). Their diet consists of deer and small mammals, along with salmon. They can sometimes be found combing tidewater beaches for carrion. Deer are the primary prey species, however, and it is estimated that the average wolf consumes 26 deer a year. Though there is a wide color variation in Alexander Archipelago wolves, most are a darker grey in color.

The gray wolf or timber wolf (canis lupis) is quite larger than its southern cousin, tipping the scales between 85-115 pounds. Adult females are about 10-15 pounds lighter than males. Colors vary widely, with gray and black being the most common. White wolves are not uncommon. Gray wolves were historically found from the Arctic south into Mexico, however, they were extirpated from the Lower 48 states many years ago. This was mostly because of conflicts arising from the conversion of wild lands to agricultural use and pastureland for domestic livestock. Most domestic stock is incapable of defending itself as effectively wild prey species can, and wolves killed many cattle, sheep, and other animals being raised for human use. The subsequent reintroduction of wolves into some areas in the Western United States has occurred among much controversy, as wolves continue to kill domestic stock. Additionally, ecosystems have achieved new balances that have no place for wolves. In such places, wolves have had a serious impact on wild game. Although wolf populations in other areas are threatened or endangered, this has never been the case in Alaska, where they are prolific in most areas of the state.

Wolves are very effective predators, hunting in packs ranging anywhere from three or four individuals to dozens of animals. Their home range may be several hundred square miles in size, and they will cycle through this area many times a year, in search of prey.

Although wolves are found in nearly all areas of Alaska of interest to hunters, few big-game hunters actually harvest a wolf on a given hunt. Wolves are very intelligent and do not prefer being near humans as a general rule. Therefore in most cases, they are able to detect humans and move out of the area before the hunters know they are there. Most wolves are killed incidental to other species being hunted; in some cases, wolves are discovered on ungulate kill sites during meat packing operations, and other times they are observed passing through while hunters are out spotting for other game. In most of those cases, wolves are taken only if the hunter is ready and capable of making an accurate shot on a moving animal. Whereas other game species will stop at the sight of a human, in most cases wolves will run, offering little or no shooting opportunity.

Wolves are sometimes hunted using normal predator hunting techniques such as calling. But because wolves are usually scattered over their range, locating and attracting them to a call is a formidable challenge. Trapping is much more effective, however, trappers are unlikely to take more than one or two wolves out of a pack, before the remaining animals wise up and either leave the area or learn how to detect and avoid the traps.