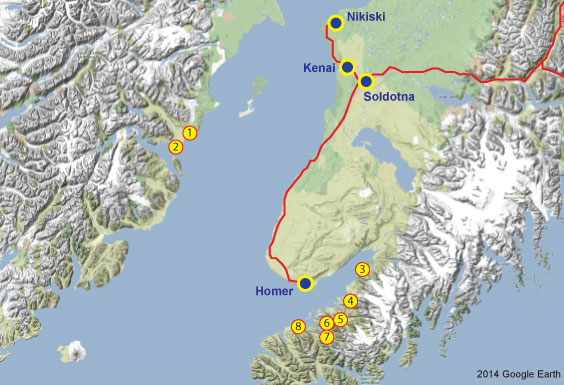 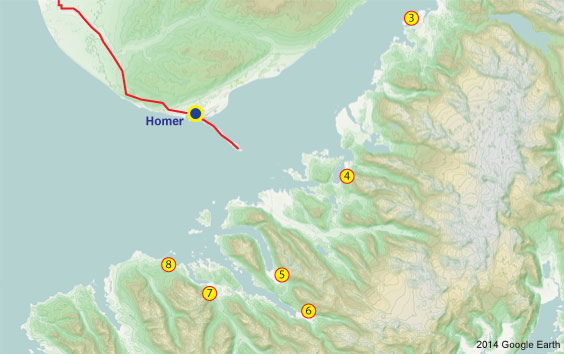 The above map shows the details of the locations of PSP-free beaches in Kachemak Bay. Note that in most cases the ideal clamming locations are at the head of the bays, where mud flats are exposed at low tide.

Are you new to clamming in Alaska? You're in for a great time! Whether you're flying solo or taking the kids out for a weekend, clamming is a great way to enjoy the Alaska outdoors, and to harvest some delicious seafood at the same time. The tools needed are actually very simple. Here's a list:

Cleaning clams is time-consuming, but the rewards are great.

If you plan to fish anywhere on the Kenai Peninsula, you need a copy of Dave Atcheson's "Fishing the Kenai Peninsula" in your rig. If you're new to the area, a copy of The Milepost will help you plan your trip, providing maps and detailed information on the locations of campgrounds, cabins, places to eat, fuel stops and much more. While you're in the bookstore, you might also check out our maps of  Kachemak Bay State Park, Kenai River (includes only the middle and lower sections of the river, from Skilak Lake to the mouth), and the Northwestern Kenai Peninsula map, which includes only the areas around Kenai, Soldotna, Sterling, Kasilof, and Nikiski. These are road maps, but they also show campgrounds, fishing areas and available species. Finally, check out Scott Haugen's excellent book, "Bank Fishing for Steelhead and Salmon" for excellent tips that will work on the Kenai River, Deep Creek and other places on the Kenai Peninsula.

Check out these species pages for the types of fish you may encounter on the Kenai Peninsula:

Click on the following links to review angling opportunities in the various areas of the Kenai Peninsula.