In Alaska you don't generally toss a rifle in the pickup and go out for an afternoon deer hunt. Here, it's usually an expedition borne of access difficulties, rough country and killer weather systems larger than most states. When things don't go well elsewhere, you just load up the truck and go home to your TV. In Alaska, it's not quite that simple. 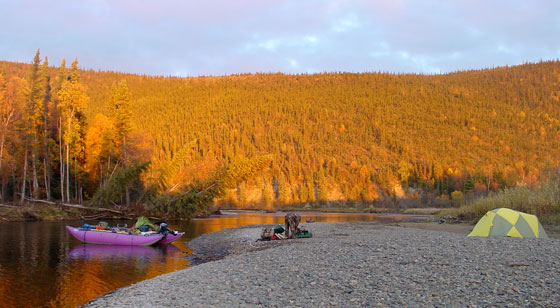 This page provides basic information you need in order to make good decisions on the selection of your gear for a variety of outdoor activities anywhere in the state. Since most of us are not on an unlimited budget, and we have a variety of interests, it's wise to choose clothing and equipment that can work for a variety of circumstances. Let's get started.

Alaska is perhaps the most dangerous place to hunt in North America. It's also the most expensive. Therefore, it makes sense to choose gear that's rugged enough for the conditions, yet affordable. But "affordable" is a relative term. It doesn't mean "inexpensive" or "cheap". It does mean purchasing gear that is not going to break during use, and require multiple replacements. Something may appear similar to a more expensive item, but it will fail in the field (gear doesn't break in the closet at home, after all), and will require repeated replacement. Eventually by the time you figure out that you should have purchased the more expensive item, you've already spent a lot of money replacing junk gear and have had many failures in the field. So an affordable item may be more expensive than something similar sitting on the shelf of your local sporting goods store, but you only need to purchase it once. In the long run it's cheaper.

The Word on Camouflage

At this writing Alaska has no blaze-orange requirement for hunters. In other words, hunters are not required to wear an orange hat or vest while hunting. Some hunters opt for the additional safety afforded by blaze orange when hunting in crowded areas, however most Alaskans wear either muted, natural colors, or camouflage. For early spring bear hunts when snow is still on the ground, go with snow camo patterns such as Realtree's Snow Camouflage pattern or the Predator Winter pattern. Spring bear hunts in Prince William Sound or in Southeast Alaska, after the leaves and grass are out require patterns with more green in them, such as Mothwing's Spring Mimicry or Mossy Oak's Obsession. For fall hunts stick with patterns on the brown, tan or gray ends of the color spectrum, such as Mossy Oak's Infinity, Bill Jordan's Advantage Timber, or Fall Sniper Brown. Choose large angular patterns overlaid with detailed patterns; these break up your outline at a distance and offer you excellent concealment up close.

The alternative to camouflage is to simply go with muted colors. Keep in mind that every layer you wear could potentially become an outer layer, depending on the temperature where you are hunting. So choose your tee shirts, thermal underwear, shirts, pants, jackets and raingear with this in mind. Avoid blue, black, or (except in snow conditions) white. These colors stand out. Instead go with browns, grays, or tan colors.