River rafters use many unique terms that are commonly understood in rafting circles. Alaska Float hunters use those terms and others which must be defined. Let's list some of the terms used, and their definitions.

Aufeis: A German word meaning "ice on top". Refers to fresh ice which forms on top of old ice, with overflow in between. Aufeis frequently persists through the summer months and can pose a navigational hazard for boaters, particularly in the Arctic where the boating season is shorter and ice melts later in the year.

APRFC: The Alaska-Pacific River Forecast Center, a website which provides reports on water levels of selected rivers around the state of Alaska.

Back-Rowing: The act of rowing backwards, using a pull-stroke. Back-rowing is the most powerful rowing stroke because it uses the muscles of the arms and the powerful muscles of the rower's lower back.

Bar: A section of shallow water caused by a hump in the bottom structure of the river. May also refer to a shallow bank along the river which is free of vegetation. Sometimes called a sand bar or a gravel bar, depending on the composition of the material involved. Larger bars along a river's edge are often used for wheel plane access to Alaska's rivers.

Beam: The side of the boat.

Bow: The front of the boat.

Breaking Wave: A standing wave with the top shearing off and flowing up or downstream.

Broach: The act of pinning a boat sideways against an obstacle.

Channel: The main flow of the current; typically the deepest part of the river.

Chicken Line: A rope (line) fastened around the perimeter of a boat, near the waterline. Used for self-rescue by passengers who have fallen overboard.

Confluence: The point at which two rivers meet, or where a river flows into any body of water.

Curler: A standing wave with a crest that curves upstream. Curlers are frequently also breaking waves.

Cutbank: An eroding high bank, typically found along the outside of a bend in the river. Cutbanks are also found at the edges of the flood plain, having been created by previous high water scouring out the banks.

Double-Oar Turn: A rowing maneuver performed by pushing with one oar while pulling with the other at the same time. The fastest way to turn a boat.

Eddy: The slack water behind an obstacle.

Eddy Fence: Relatively slack water that occurs along the axis of a drop-off.

Eddy Out: The act of maneuvering a boat into the calmer water of an eddy.

Ferry: The act of maneuvering a boat from one side of the river to the other. Also known as cross-ferrying.

Forward-Rowing: Also known as push-rowing, refers to the act of moving the boat forward while facing the direction of travel. Forward-rowing is accomplished by the oarsman planting the blades forward of the rowing station and pushing the oar handles forward.

Gravel Bar: (see bar) A shallow hump composed of gravel, or a gravel bank which may or may not be overgrown with vegetation. Gravel bars frequently make the best campsites, and long, flat, straight gravel bars without vegetation are often used as landing areas for wheeled aircraft.

Haystack: A very large standing wave. Haystacks sometimes occur in series in a chute or channel.

High-Siding: The act of moving passengers to the high side of the boat when a broach occurs. High-siding is typically done in an attempt to prevent capsizing.

Ice Lens: A lens-shaped ice formation sandwiched between layers of soil. Typically found in layers of permafrost and sometimes seen in cutbanks.

Ledge: Typically a rock formation positioned across the flow of the river. Ledges may or may not be above water.

Line: A planned course through the water. Also used in reference to a rope used on a boat.

Lining: The act of using a line (rope) from shore to maneuver a boat downstream.

Muskeg: A wetland bog comprised of living and rotting vegetation. Muskegs may occur atop a permafrost layer that prevents water from penetrating the soil. In some cases, muskeg forms a floating mat of vegetation with root systems dense enough to support hikers.

Permafrost: Soil that remains permanently frozen. Permafrost layers in Alaska range in depth from two feet to 2,000 feet, depending on climate conditions and latitude.

Pivot: The act of turning a boat, typically to miss a hazard, but may be done to keep the boat properly oriented to the bank.

Portage: The act of physically carrying a boat and its contents overland. Portaging is sometimes necessary to initially access the river from the drop location or to avoid running severe whitewater or other hazards.

Reversal: Used to describe any of several situations where water moves horizontally or vertically in relation to another current.

Riparian Zone: The area bordering a river, including the floodplain.

River Left: The left-hand side of the river or bank, facing downstream.

River Right: The right-hand side of the river or bank, facing downstream.

Root Wad: The roots of a downed tree that remain attached to the trunk. Root wads are sometimes positioned in or near the main flow, with the tree trunk positioned downstream and the root mat facing upstream. Root wads often form a collection point of other debris floating down the river. Also known as a root ball.

Ship Oars: The act of sliding boat oars out of the water and into the boat. Oars are typically shipped when the boat is beached, but may also be done to slip through a narrow slot in whitewater.

Sleeper: A submerged obstacle that shows little or no sign from the surface of its presence. Similar to a pillow.

Spin: The act of quickly rotating the boat. Typically done as a whitewater maneuver to avoid hazards.

Standing Wave: A wave caused by fast current moving into slower water. Typically found in chutes or at the end of a tongue.

Stern: The back of the boat.

Strainer: An obstacle which allows river water to pass through, but which traps objects. Examples include downed trees, logjams and some rock formations.

Sweeper: A tree laying horizontally (or nearly so), in such a manner that its limbs touch the water.

Tailout: The area found at the end of a pool, or at the downstream end of rapids. May be characterized by shallow water.

Tongue: Usually the main part of the current, between two obstacles. Named for the tongue-shaped configuration of the water upstream of standing waves.

Transition Zone: An area between bends in the river, where the oarsman typically repositions the boat so the bow maintains the proper position in relation to the bank.

Tundra: A treeless expanse of grassland or muskeg, typically characterized by tussock fields underlain with permafrost.

Tussock: A mushroom-shaped grass clump, ranging in size from a few inches to over three feet in height. Tussocks are frequently found over large areas known as tussock fields, which may extend for many miles, presenting significant challenges for hikers.

Whirlpool: A horizontal flow reversal that travels in a circular pattern. Some whirlpools are flat, while others may have a conical shape. Often found downstream of an obstacle.

Wrap: The result of a boat becoming pinned against an obstacle in such a manner that the boat conforms (wraps) around the object. A wrapped boat is usually positioned with either the top or the bottom perpendicular to the current. 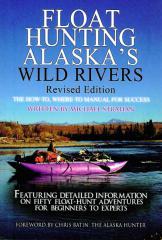