It's been said that "adventure" is the result of a lack of planning. Any well-planned Alaska wilderness adventure includes provisions and preparations for emergency survival situations. Failure to include emergency preparation can result in serious injury or even death. Here are some general considerations whenever you plan your Alaska backcountry trip, whether you're heading to Prince William Sound on a weekend cruise, or flying deep into the interior on a two-week hunting expedition. 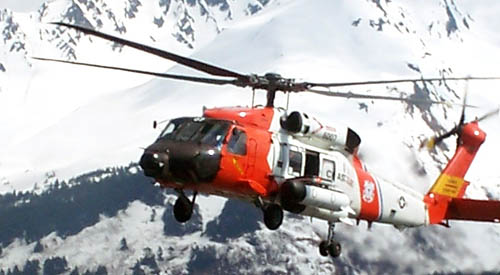 In September, 1993, pilot Mike Legler made a glassy-water landing on a lake near Prince William Sound. The floats nosed underwater on landing and sheared off the aircraft, and Mike was knocked unconscious by a blow to his head on the dash of the plane. When he came to, the aircraft was filling with water and he didn't have even a few seconds to grab any gear out of the airplane. With a deep, bleeding gash on his forehead, he swam to shore as his Taylorcraft sank in water over 100 feet deep. Upon making it to shore he assessed his situation. His forehead was bleeding profusely, he had lost his shoes in the crash, he was soaked to the skin and his survival gear went down with the plane. He was rescued nine days later, his survival made possible only by two things: keeping a cool head, and having a few essentials in his pockets; a flare pistol with one flare, a knife, matches, and a package of cigars (he used the wrapper to start a fire).

When you pack your gear for any Alaska trip involving a flight in a small aircraft over remote areas, pack with the possibility of an "unscheduled landing". Icing, mechanical failures, weather events and bird strikes are but a few of the many potential causes of forced landings. Keeping your emergency supplies close-at-hand is always a good idea. Pack the following basic supplies in a vest or jacket, and wear it on the flight.

If you wear cargo pants or a survival vest, fill the pockets with critical survival items. Use the list below as a starting point.

Here's a description of the above items:

Let's examine these items in a little more detail:

A firearm can be used as a signaling tool, as a weapon to protect yourself against wildlife, and to kill animals for food. Cartridges can be disassembled and the gunpowder used to start fires. The best firearm for your day pack or fanny pack is a handgun of .357 or larger caliber. Ensure it is unloaded before you pack it; the last thing you need in addition to your troubles is for the weapon to discharge when you don't expect it (as in during a very rough landing).

There are many types of first-aid kits out there, and the first challenge you'll face is knowing "how much is too much?". Since you have no idea what to prepare for, your fly-out kit should be designed to take care of broken bones (use a SAM Splint for minor breaks, use aircraft parts or tree limbs for splinting larger breaks), open wounds or burns. Blood-stopper bandages are excellent for this, and your kit should contain burn cream and antibacterial ointment. Clean dressings are important as well, so toss in some gauze bandages and first aid tape to secure them. Of course bring along an assortment of Band-Aids too, and some pain meds.

Toss in a small spool of ten-pound test line, some split shot, hooks, jigs, spinners and flies. A bubble float can also be a huge help. In most cases you're looking for smaller fish like grayling or char, however some rivers at certain times of year have salmon runs. Check our Freshwater Fishing section for information on salmon run timing for different parts of the state.

In addition to items mentioned above, toss in a couple of freeze dried meals, some bouillon cubes and hard candies.

Headlamps are almost always a better choice than a hand-held flashlight, because they leave your hands free to do other things.

The GPS will allow you to accurately communicate your position to potential rescuers. Ensure that yours has fresh batteries.

Toss in an extra couple of bundles in your bag. You may need it to rig a tarp shelter or to bind splinted limbs.

An essential item. Multi-tools come in various configurations; be sure yours has pliers, screwdrivers (useful for removing items off the airplane if necessary for survival), a saw blade (for collecting firewood), and at least one sharp knife blade. Scissors are handy for cutting cloth for bandages.

Bring at least 100' of p-cord (550 cord, for those military types). You can use it for rigging a shelter and many other things.

Pack a lightweight set of rain gear (jacket and pants).

The satellite phone is arguably the single most important piece of survival gear you can bring with you. It allows you to communicate directly with rescue personnel who can help you assess the severity of injuries and craft a relevant response. In short, it could save your life. The best sat phone for use in Alaska is the Motorola Irridium phone; Motorola's satellites are in a high orbit relative to Alaska and you'll rarely drop a call. Other brands use satellites that are lower on the horizon and have proven to be unreliable in much of the state of Alaska. Bring a spare battery!

Note that in the second list we are including a smartphone (iPhone, Android, etc.). In some areas of Alaska you may get lucky and actually obtain a cell signal. Though this is unlikely in most of the state, it is a possibility in some areas. But the main benefit of the smartphone is the huge variety of applications available for the device, that could be useful in a survival situation. Remember that survival apps are useless if they depend on internet availability to function. Choose self-contained apps with content that's completely downloaded from the Internet, so the device is self-contained and will work if you cannot connect. Bring a spare power supply along as well. Note that devices exist to recharge your device in the field as well, with solar power or even heat from your fire.

A small backpacking stove provides an easy way to boil water (even drinking hot water when you're cold will raise your core temperature). Boiling water over a fire is much more challenging than on a backpacking stove. Consider using a liquid-fuel stove, as small amounts of fuel can be poured out on wood to start a fire. You don't need a liter bottle; the small pint-sized one is perfect for this application. You can also make an inexpensive, light and compact alcohol stove out of a soda can.

Bring a 10x10 tarp in your bag. It makes an excellent emergency shelter and can be secured in place with parachute cord.

Fill your water bottle before departure and put it in your bag. In an emergency, water is often one of the first things needed. If you are stuck for a few days, the water filter will allow you to purify water without boiling, resulting in a considerable savings of both time and energy.

Though not used as commonly as they were before the advent of electronic communications gear, these ground-to-air signals can be your last ace-in-the-hole if your fancy electronics fail. Here is a list of the common signals you should know.